Brad Pitt's first time: Before Angelina Jolie and "By the Sea," Pitt had never been directed by a woman — and these top actors still haven't 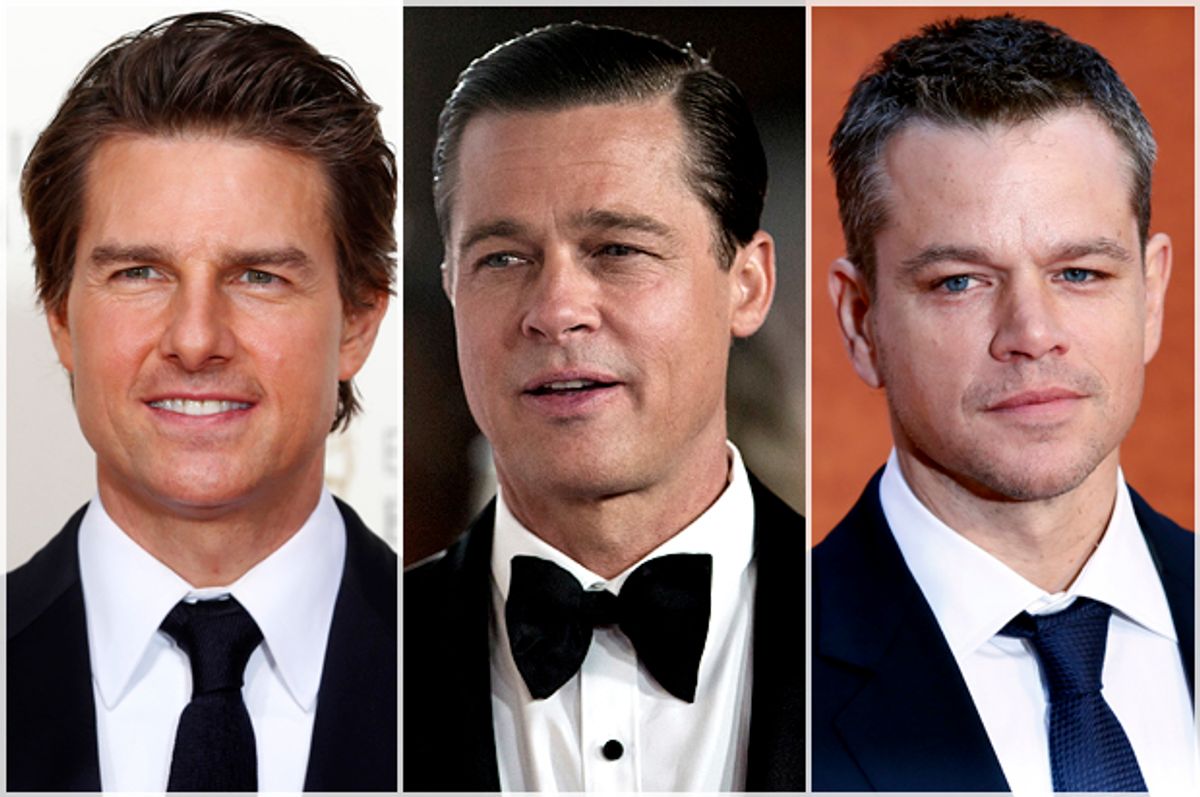 Angelina Jolie’s third directorial feature "By the Sea" screened to mixed reactions at the AFI film fest, but the movie is raising eyebrows for more than its quality. Ahead of the film’s debut, where it was chosen as the opening night selection, a New York Times interview with Jolie and her costar husband, Brad Pitt, dropped a truth bomb: Before being cast in his wife’s film, Pitt had never worked with a female director before.

Brad Pitt’s first role was an uncredited walk-on spot in 1987’s "Hunk," and in his 28 subsequent years in the biz, he’s worked with directors like Ridley Scott, David Fincher and Quentin Tarantino. But not a single woman.

Following the ACLU’s allegations of widespread gender discrimination in Hollywood’s hiring practices, numerous reports have surfaced about the struggles female directors face working within a male-dominated industry. As the ACLU’s Ariela Midgal told Time magazine back in May, “We heard over and over again from female directors that they’ve been told, ‘This show is too hard for women’ or ‘You can’t do this movie, it’s action’—this to women who have directed plenty of action.” And in a recent survey of industry prejudice, Vulture’s Kyle Buchanan reports that women likewise told that they “aren’t ready” or are only right for “smaller, quirkier” fare.

Thus, while Brad Pitt’s horrible lack of female bosses isn’t surprising, it’s worth looking into just how common a situation it is for Hollywood’s other top film actors. To do so, I surveyed Forbes’ 2015 list of the highest-earning male A-listers, excluding in my findings foreign actors whose audience lies largely outside the U.S., such as Bollywood stars Salman Khan and Akshay Kumar. I likewise excluded animated projects and voice roles. This list of folks includes names like Matt Damon, Tom Cruise, Will Smith and Hugh Jackman, each of whom has been working in the industry for decades. However, not a single one of those four men has ever worked on a full-length feature film with a female director. In fact, of the 25 top earners I surveyed, seven of them had yet to work on a movie helmed by a woman (that’s more than 1 in 4). These names also included Jonah Hill, Chris Hemsworth and Dwayne Johnson.

But that’s just the tip of the iceberg. Robert Downey Jr., Mark Wahlberg and Daniel Craig have only been directed in a full-length feature by one woman each in their entire careers — Downey Jr. in Jodie Foster's 1995 dark comedy "Home for the Holidays," Wahlberg in Penny Marshall's "Renaissance Man" and Craig in Christine Jeff's 2003 Plath biopic "Sylvia." Vin Diesel barely escapes a null: He had an uncredited part in Marshall’s 1990 Oliver Sacks drama "Awakenings," and hasn’t been directed by a woman since.

A rare bright spot is Channing Tatum who, in contrast, got his start just 10 years ago in the sports movie "Coach Carter" and has acted in four movies directed by women just in the past decade — Lana Wachowski in "Jupiter Ascending," Kimberly Peirce in "Stop-Loss," Anne Fletcher for "Step Up" and Barbara Kopple on "Havoc." Like Tatum, Chris Pratt fares decently: His first-ever film, 2003’s "The Extreme Team," was directed by Leslie Libman, and he’s acted in two more since — "Jennifer’s Body" and "Zero Dark Thirty" — helmed by Karen Kusama and Kathryn Bigelow, respectively.

Because these relative newcomers are taking (slightly) more projects with a woman at the reins, it might suggest that things are getting better. But the most troubling thing is that when you look at the trends, top-earning actors work with fewer and fewer women the more famous and successful they become.

If we narrow our survey down to movies released since 2000, only 10 of those top 25 actors (just 38 percent) have acted in a female-directed feature film in the last 15 years. This means that neither Wahlberg, Leonardo DiCaprio, George Clooney, Ben Affleck, Adam Sandler nor Russell Crowe has worked for a female director in this century. The longest stretch is Sandler, who hasn’t been in a female-helmed effort since Nora Ephron's 1994 holiday comedy "Mixed Nuts." For perspective, that’s the same year Dakota Fanning was born.

No matter which way you look at them, the numbers aren’t good — they say a lot about the state of emergency in Hollywood today. As a report from San Diego State University’s Center for the Study of Women in Television and Film indicates, 93 percent of film directors are male—meaning that if an actor works on an average of one project each year, he’s likely to work under a woman every 14 years. This means that statistically the next probable year Brad Pitt will star in a movie with a female director’s name attached to it is 2029.

If that sounds incredibly depressing, it’s just an average day in Hollywood.

Watch this video that shows how male-dominated Hollywood really is: