It's time to rake Ben Carson over the coals: Enough of the GOP's victim complex -- it's not persecution to face tough questions

Obama and Hillary have been subject to near constant vetting. But it's a left-wing conspiracy when Carson faces it? 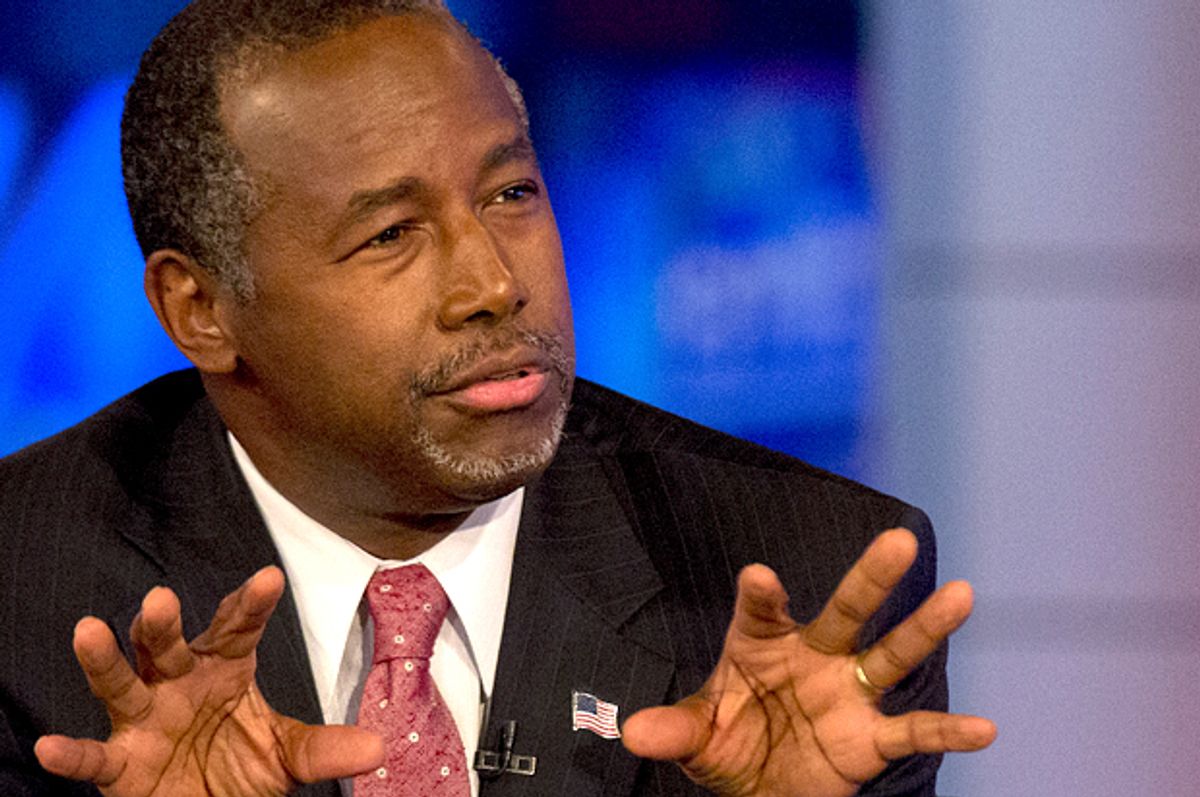 Republicans are generally one of the first groups to screech about political correctness, even while victim-shaming women, minorities, liberals and anyone else they define as weak. Take for example, the current state of the Republican primary: Personal responsibility and moral toughness are character traits the GOP has coopted and branded, but ever since the dreaded CNBC debate last month, the Republicans have fully abandoned their tough-guy swagger and have fully embraced whiny victimhood.

At the vanguard of this bizarre reversal is Dr. Ben Carson, whose newly pressed frontrunner status has been predictably accompanied by the blinding Klieg lights of both the online and traditional press. The expectation from the Carson camp is that he and his fellow Republicans should apparently be allowed to introduce with impunity various ridiculous policy proposals while concurrently fabricating ludicrous tall tales about their pasts. Anyone who (rightfully) challenges them on their nonsense is clearly endorsing a Hillary Clinton presidency by crushing the GOP's 2016 hopes and dreams. In other words, Carson and the Republicans are the victims of the alleged "liberal media," and they've got the crocodile tears to prove it.

This didn't begin with Carson, of course, but it's more visible now than ever before. Carson's contentious press conference last week was arguably a new high-water mark for the GOP's victimhood complex: Carson vocally objected to the scrutiny he's receiving by claiming, with heretofore unseen exuberance, that President Obama was never vetted so aggressively by the opportunistic liberal media. Curiously, Carson used as evidence of this double standard the controversy over Rev. Jeremiah Wright -- one of the most heavily scrutinized episodes in recent political memory.

Why, Carson wondered aloud and with a straight face, had the news media failed to apply the same standards to Obama in 2008.

In reality, the permanent vetting of Obama continues in earnest even today, with a little more than a year remaining in his two-term presidency. Considering how 54 percent of Republicans still believe Obama is a Muslim and a full 61 percent of Trump supporters think Obama was born in Kenya, the ongoing scrutiny has obviously stuck to the wall. But Ben Carson would have us believe Obama got a free pass -- that his allegedly unprecedented use of Teleprompters and appointment of "czars" and even the color of his suits haven't been debated at length in the press.

Conversely, we're not supposed to ask serious questions about Carson's "tithing"-based tax plan or the fact that it, as well as the tax plans proposed by the other GOP A-listers, will each generate 10-year budget deficits in the trillions. We're not supposed to wonder why Carson said he received a scholarship from West Point when the prestigious military academy doesn't even offer scholarships. In other words, it's okay to nail Obama about non-issues like Teleprompters and his preference for arugula, but we shouldn't dare dig into whether Carson stabbed someone or whether he endorsed junk-science nutrition supplements.

On MSNBC's "Morning Joe" the other day, right-wing talker Hugh Hewitt tried desperately to convince an incredulous Joe Scarborough that the media hasn't scrutinized Hillary Clinton with the same tenacity it's currently applying to Ben Carson. Again, more selective memory and a cynical belief that the GOP base is so ignorant and so consumed with Obama and Clinton derangement that it'll ignore the objective reality that Hillary has been relentlessly watchdogged by the press for more than 25 years.

During the MSNBC segment, Scarborough limited his counter-attack against Hewitt to the past year, all through which Hillary's emails and involvement in decisions surrounding the 2012 attacks in Benghazi have been front-page news. What Scarborough didn't mention was how Hillary was thoroughly vetted in 1992, when her husband first ran for president, then throughout President Clinton's two terms, including extensive investigations into Whitewater. She was vetted again during her 2000 senatorial run; again in 2008 when she ran for president; and again after being nominated for Secretary of State.

Ben Carson, on the other hand, hasn't run for a damn thing yet. Consequently, the press hasn't had any reason to look into his past or his crackpot policy ideas. Hewitt and the others think this is somehow unfair and that there's not a very well-defined contrast between Carson's new ascendancy into the limelight and Hillary's nearly permanent residency in the limelight. We're supposed to believe that Hillary's 25 years of near constant vetting never happened, while Carson's seven days of vetting is evidence of a liberal media conspiracy.

And they wonder why Republicans like Scarborough are questioning what the hell is going on with his party.

It's simple, really. The bullies are defining themselves as the victims of bullying. While this mind-numbing transformation is surely playing well with the base, the rest of us only see a pack of shrieking children with full diapers.

In a broader sense, the ruckus over Starbucks cups is yet another bellwether, illustrating the GOP as the party of victimization. They somehow believe that by issuing red cups without an explicitly religious message printed on the side, Starbucks is not only engaging in the insanely nonexistent "War on Christmas" myth, but the coffee retailer is directly accosting Christian Republicans.

Yes, the most populace religious demographic (70 percent of Americans identify as Christian), along with the most financially lucrative holiday of the year, are somehow threatened by a red cup. Frankly, if your faith is threatened by the existence of red cups at a chain of coffee stores, then it's probably time to reevaluate the strength of your faith. Perhaps in the process, the GOP faithful should take a look at Fox News Channel's and Donald Trump's use of the secular "Happy Holidays" greeting as well -- since, you know, we're talking about equal treatment of both sides.

Let's be clear: the GOP's victimhood act is one of the most pathetically ironic shows of political Kabuki in recent memory. It's transparently silly, and emphasizes the long-standing observation that the Republican Party is being dragged away from the grown-up table by the increasingly unhinged base. Tuesday night's debate will likely generate more childish pee-pants dancing by these self-identified tough guys who think they have the stones to operate successfully on a precipitously hostile world stage. If John Harwood, Megyn Kelly and red coffee cups are believed to be actual threats to the integrity and fortitude of the GOP presidential field, they've already lost the election. As Scarboroough said to Hewitt, he likes to win, but the infantile victim complex on display by previously unvetted goons like Trump and Carson will only serve to elect Hillary Clinton, who with every passing tantrum by her would-be GOP challengers looks more and more presidential and entirely qualified to take on ISIS, Putin, China and every other bellicose villain in the rogues gallery, while Ben Carson can't seem to deal with Howard Kurtz or Politico without disintegrating into a sobbing mess.