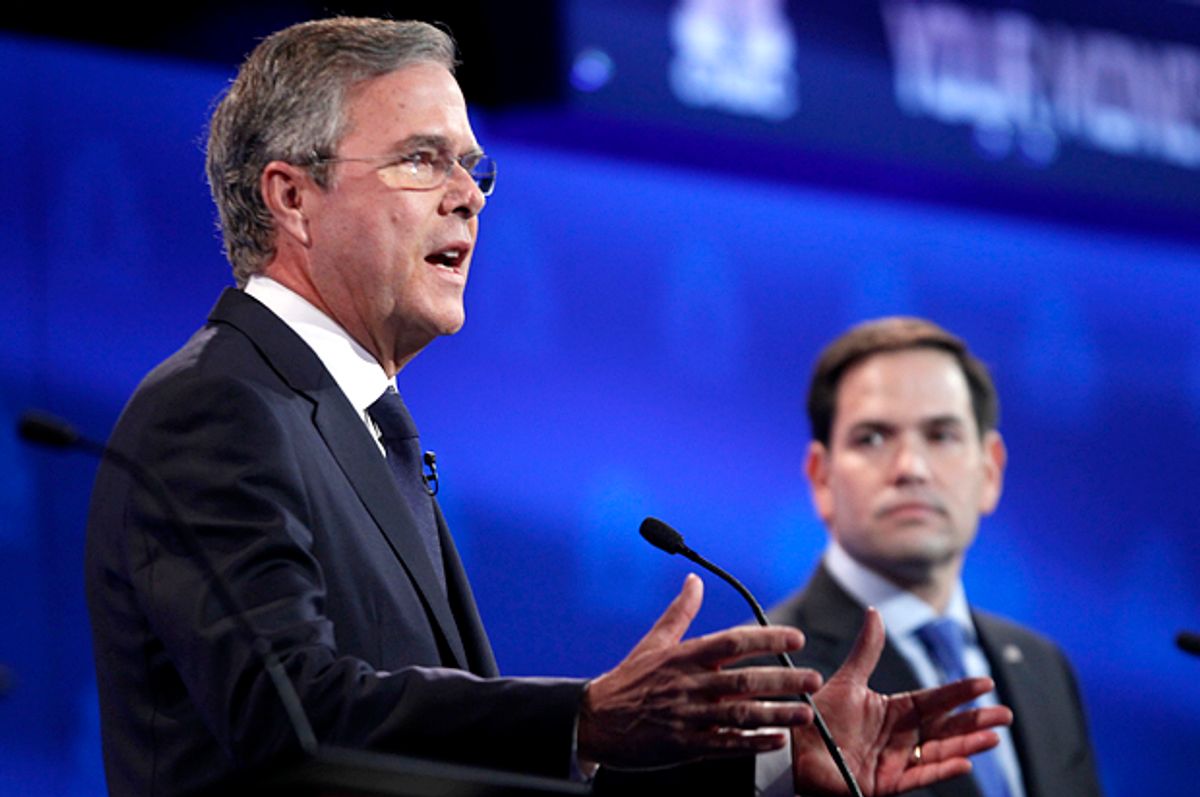 There’s yet another Republican presidential debate scheduled for tonight, and as we sit patiently waiting for the candidates to take the stage, let’s revisit one of the critical moments from the last debate. Jeb Bush, in need of a strong performance and looking to take down Marco Rubio a few pegs, let rip with an attack on Rubio’s shoddy attendance record in the Senate. Rubio was ready for the attack, easily deflected it, and then turned it back on Jeb by making him look petty and desperate. It was a disaster for Jeb, and it happened because Bush and his political operation spent the days and weeks leading up to the debate making it painfully obvious that he would attack Rubio along these lines, giving Rubio all the time in the world to prepare and practice his response.

So now Jeb is coming into this debate in even worse shape and in even greater need of a strong performance and/or a Rubio flameout. Given the pantsing he received the last time around, you’d think Jebworld would have learned its lesson about telegraphing attacks. But, alas, Team Jeb just can’t keep its mouth shut. As the New York Times reports this morning, Bush’s super PAC, Right to Rise, is sinking $20 million into anti-Rubio attack ads, and it has plans to go after his record on, of all things, abortion:

The cash-rich group aiding Jeb Bush’s White House run as filmed a provocative video casting his rival Marco Rubio as ultimately unelectable because of his hard-line stand against abortion.

That group, which has raised more than $100 million, has asked voters in New Hampshire how they feel about Mr. Rubio’s skipping important votes in the Senate.

I get that Jeb’s strategy is focused mainly on the general election and works to broaden his appeal beyond the conservative base – “lose the primary to win the general,” as he memorably put it – but I’m not sure what the hell Right to Rise is doing here. Rubio does indeed have an extreme position on abortion rights – he doesn’t support any abortion exceptions, period – that places him well to the right of the American public and the last five GOP nominees for the White House. But it’s not like Jeb is “moderate” when it comes to reproductive rights. Jeb is to the right of his brother on abortion and spent his two terms as Florida governor using the power of the state to impose his personal anti-abortion convictions on his constituents. As the Huffington Post reported earlier this year:

[Jeb] aggressively intervened in two high-profile cases to prevent a mentally disabled rape victim and a 13-year-old girl from being able to have abortions.

In the former case, involving a 22-year-old rape victim who was both pregnant and developmentally disabled, Bush asked a court to appoint a guardian to represent the woman's fetus. The woman had been raped while living in state-supervised facilities, but did not have the mental capacity to identify her attacker.

So if Right to Rise attacks Rubio on abortion, it will succeed in endearing him to conservative voters even more while not really doing Jeb any favors either.

What I don’t understand is why Jeb’s political operation is not going after Rubio on the issue that conservatives do actually mistrust him on: immigration. Rubio’s spent the past two years furiously backing away from the comprehensive immigration reform bill he passed in the Senate and taking increasingly hardline immigration positions to make amends with the GOP’s conservative base. Jeb’s already given up winning the base over on immigration and is sticking by his support for comprehensive reform, but he can pick away at Rubio’s immigration scab and unsubtly remind conservative voters of all the work he did to pass the Gang of Eight bill in the Senate (a part of Rubio’s past that he’s desperately trying to spin and rationalize). Even if conservatives don’t consider him a credible attack dog on immigration, Jeb can still offer himself to more moderate Republicans and the GOP establishment as a candidate who sticks to principle on an issue they care about, even in the face of political backlash.

But Right to Rise has its own grand designs on how to tackle Rubio and seems hell-bent on leaking those plans so that the entire world knows exactly what they’re going to do well in advance. That strategy has produced nothing but negative returns to date, but they apparently don’t see any reason to change it.