"Occupation is root cause of violence": Jewish-Americans protest at Israel's Western Wall, call for boycott 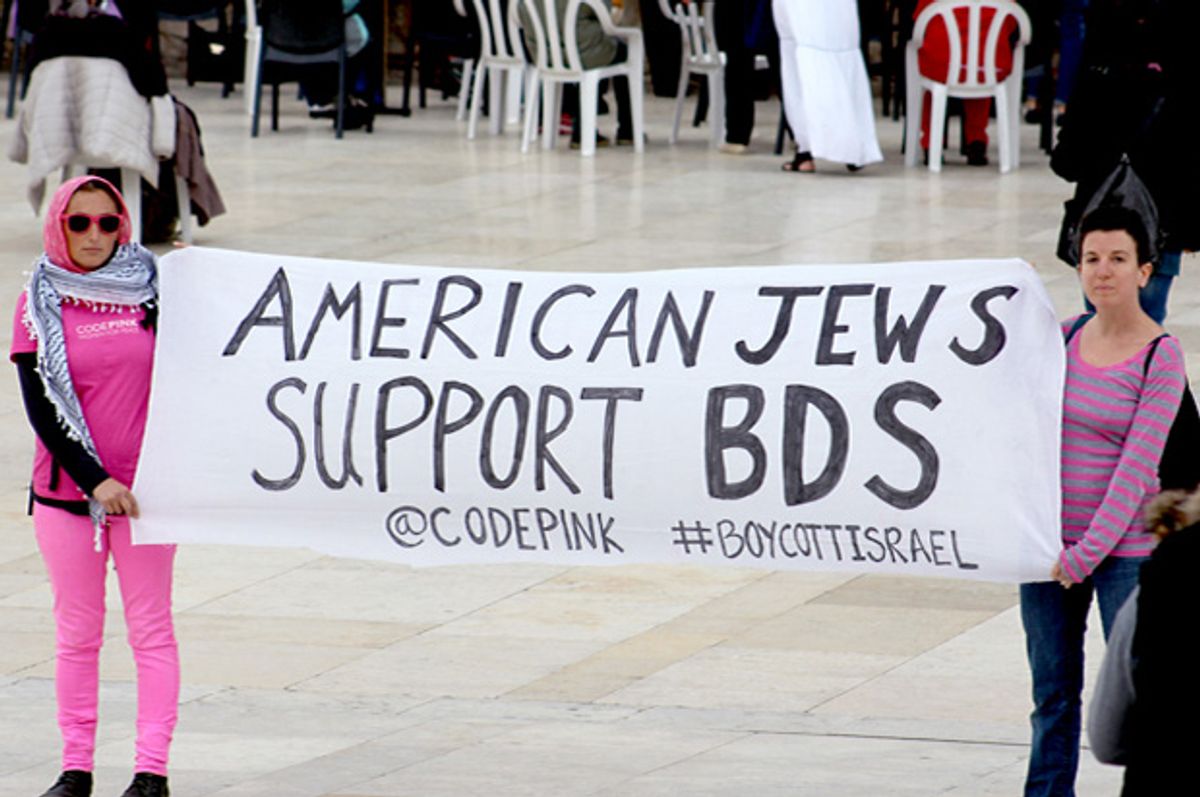 Jewish-American activists with the peace organization CODEPINK protested at Israel's Western Wall (also known as the Kotel or Wailing Wall) on Tuesday morning. They unfurled a banner that read "American Jews support BDS," referring to Boycott, Divestment, and Sanctions, a peaceful global human rights movement called for by Palestinian civil society that seeks to use nonviolent economic means to pressure the Israeli government to end its illegal occupation of the Palestinian territories, grant equal rights to Palestinian citizens, and allow Palestinians who were violently expelled from their ancestral lands to return -- as is required by international law.

After five minutes, plain-clothed Israeli authorities confiscated their banner and told them to leave. The activists, Ariel Gold and Ariel Vegosen, were part of a week-long CODEPINK trip to Israel-Palestine, where they witnessed firsthand what life is like for Palestinians living under military occupation.

CODEPINK said that, during its trip, "along with helping Palestinian farmers with their olive harvest, the group witnessed Israel's apartheid system of different roads, services, and laws for different people. They experienced major restrictions on Palestinian freedom of movement, the massive growth of illegal Jewish-only settlements on Palestinian land, and numerous human rights abuses against Palestinians."

"At this moment of escalated violence in Palestine and Israel, we are here at the Kotel to pray for an end to the occupation, the root cause of the violence," Gold and Vergosen explained. "As American Jews we take a stand in support of peace and justice for all people."

A wave of unrest has recently swept Israel-Palestine. According to the Palestinian Health Ministry, in just over a month, from Oct. 1 to Nov. 8, more than 3,000 Palestinians were injured by Israeli soldiers and/or settlers. 79 Palestinians were killed, including 17 children and four women, along with an Eritrean refugee, who was lynched by an Israeli mob after being confused for a Palestinian militant. In the same time period, eight Israelis were killed.

Addressing the bloodshed, Gold and Vergosen stated in a CODEPINK statement "We know that the root cause of the violence is Israel's occupation, dispossession, and violence against the Palestinian people and that America's financial and political support is instrumental in allowing this to continue."

"We support Boycott, Divestment, and Sanctions as a nonviolent strategy to bring about a just peace and full equality for all people in Palestine and Israel," they added. "We call on all people to stand in solidarity with the Palestinian people and boycott Israel until Palestinians have equal rights and occupied lands are returned by Israel." Salon reached out to Ariel Gold, asking her why she participated in the protest.

"We as American Jews have a responsibility to end the occupation," Gold told Salon. "There is a difference between being Jewish and being a Zionist. We believe that Judaism is a nonviolent religion; the occupation goes against Jewish values."

"We are complicit in the occupation because we are paying for it," Gold said. "As Americans, we have to take a stand to end the occupation because our tax dollars fund this violence. Right now, [Israeli Prime Minister] Netanyahu is in the U.S. asking for a 60% increase in military aid to Israel. We already give Israel $3.1 billion a year. That money could be going to our schools and healthcare."

"The reason we are supporting Boycott, Divestment, and Sanctions is because it is a nonviolent strategy to end the occupation, which is the root cause of the violence," she continued. "We have seen such a strategy work in South Africa and in the U.S. during segregation. We cannot stand idly by while Palestinians are suffering from human rights violations, such as restrictions on freedom of movement, collective punishment, land grabs, mass and child imprisonment, and more."

"Our Jewish heroes are people like Abraham Joshua Heschel who stood with Martin Luther King, Jr. and said 'Prayer is meaningless unless it is subversive,'" Gold explained. "When Rabbi Heschel participated the march from Selma to Montgomery, he said that that he felt like his feet were praying. Our action today at the Western Wall was also praying with our feet."