Passion Pit's Michael Angelakos comes out on Bret Easton Ellis' podcast: “I am saying something that I’ve never said before publicly” 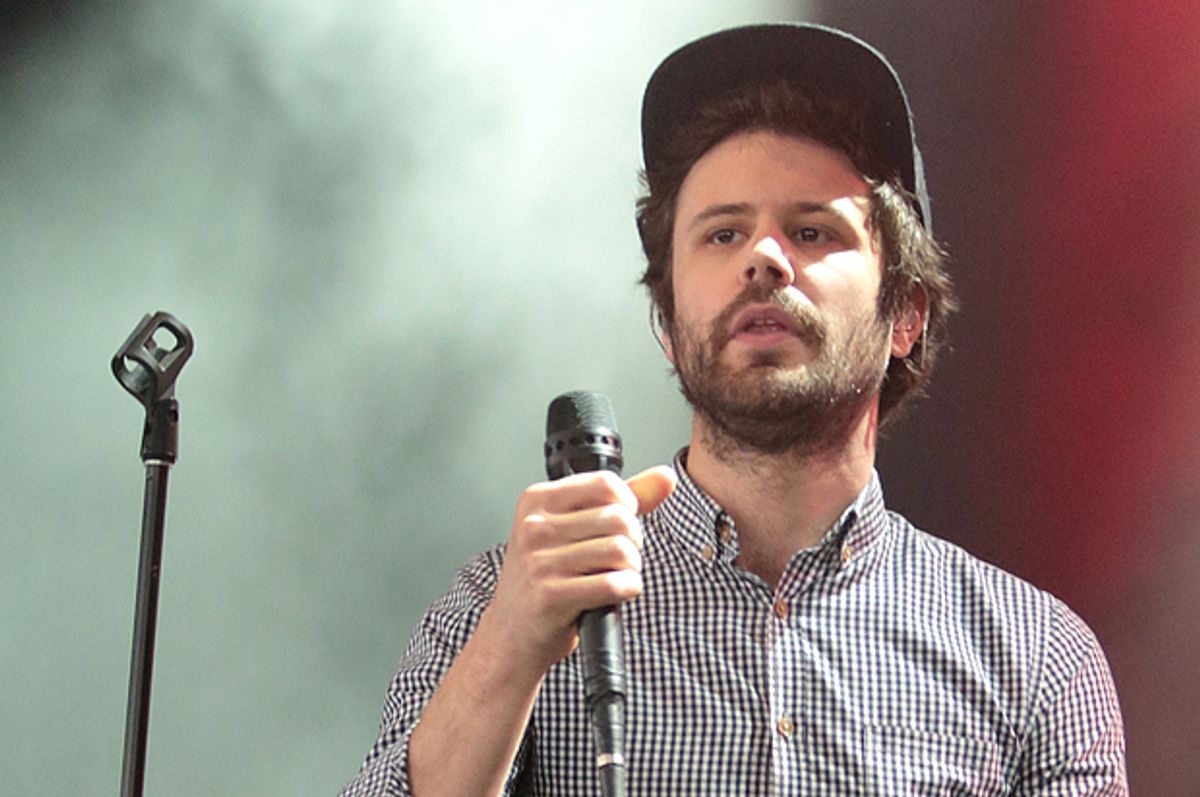 Dear Michael Angelakos -- you brave and talented man -- thank you.

Yesterday, Passion Pit frontman Angelakos came out as gay on Bret Easton Ellis' podcast. As the musician and the author’s conversation progressed, Angelakos said, “I am saying something that I’ve never said before publicly.”

And with that statement, Angelakos explained the impetus to come out:

"I've told very few people in my personal small circles because I don't know how to talk about it, you know? Talking with you—we've talked before—when someone understands what you do and what you make, it disarms you a little bit and you can just be yourself because you don't have to defend your work. ... This is the kind of situation every artist wants to be in—to talk to artists they really admire. When this was all happening recently, finally, I just decided it might be best to talk about it here. I don't really know what happened, but it's just one of those gut feelings. It's the same gut feeling I had when I said, OK, I kind of just need to talk to people about the fact that I am. I'm gay. And that's it. It just has to happen. This was exactly the type of situation where I don't feel like I'm being threatened."

Angelakos filed for divorce from stylist Kirsty Mucci in August, and credits her with helping him gain the courage to publicly come out: "When I decided to really deal with it head on—which was, I don't know, in June—she was the one who spearheaded it in a way. ... She said, 'You need to figure out what's going on with your sexuality because you can't hate yourself anymore,” he said.

This isn’t Angelakos’ first time revealing very private details to the public. In 2012 he discussed his struggle with bipolar disorder with Rolling Stone, news that was met with a mixed response from the public.

In 2013, the band posted an open letter to fans on Passion Pit’s website explaining the reasons band’s cancel shows. At the time, the band cancelled a number of shows due to Angelakos’ manic depressive episodes, the debilitating symptoms of which can be exacerbated by life on the road.

The letter read as a sincere explanation to a frustrating situation. Passion Pit wanted fans to know that the band loses out just as much (if not more) when shows are cancelled, for reasons more complex than an artist simply not feeling like going on stage that day. I remember thinking it was one of the most honest and intimate statements I’ve read from a band, and admired the band’s candor.

Other members of the media were not as impressed. The open letter to fans was dismissed by many music outlets, mocked by others, and also referred to as “condescending." What was intended to be the initial steps toward honest discourse between artists and the public about the entangling worlds of art and mental illness reaffirmed what most fear when considering bringing up the topic in the first place -- ridicule and shame.

“Sorry,” the public/media seemed to say, “we like listening to your music, but really don’t care what else you may be going through. Play our shows, damn it, or else.”

Passion Pit removed the letter from the band’s website, and the band played on -- albeit reluctantly.

That experience (fortunately) didn’t prevent Angelakos and other musicians affected by bipolar disorder like Demi Lovato and Titus Andronicus frontman Patrick Stickles from discussing their experiences with bipolar disorder and other forms of mental illness. Angelakos has become an advocate for mental health awareness, and recorded a PSA about his experience for Glenn Close’s non-profit Bring Change 2 Mind earlier this year:

Angelakos coming out as gay to the public is one step closer to blurring the line that separates his personal life from his very public professional one. It raises the question as to whether the artist’s personal life should be an open book for the public to peruse. Undoubtedly, an artist’s experiences influences the work, but at what point does the life become the prologue for analysis of the work itself?

The goal of art is to create something meaningful, to express something to be sent out into the universe in the hopes of it being relatable, or at the very least acknowledged. We’ve all had those moments in which we want nothing more than to feel less alone. Those are the times we turn to music, art and poetry to help us feel for human -- less alien to ourselves. We appreciate when someone expresses it more eloquently than maybe we ever felt it.

But it’s important to consider the implications for the artists, if we’re to take any interest in their personal lives at all. The drive to create and connect to people fuels much artistic creation. Detailing intimate thoughts and experiences while carrying on as a public figure produces torsional force most would easily snap under. In producing work that reaches broad audiences, artists release bits of themselves to be identified with, launching them into public display. As the work gains more recognition, the artist attracts more and more attention into their orbit, which I imagine can be isolating and frightening to find yourself in the center of.

But to reveal parts of yourself that align with what used to be taboo -- mental health struggles and sexual orientations that don’t align with heteronormativity -- is brave, and a hopeful indication that progress can be accomplished. It’s for these reasons that I’m grateful to Angelakos, not only for creating some of my favorite songs, but for helping me feel a little more human.