"Politics is always about lying": But you're not crazy if you think the lies are getting bigger and more frequent 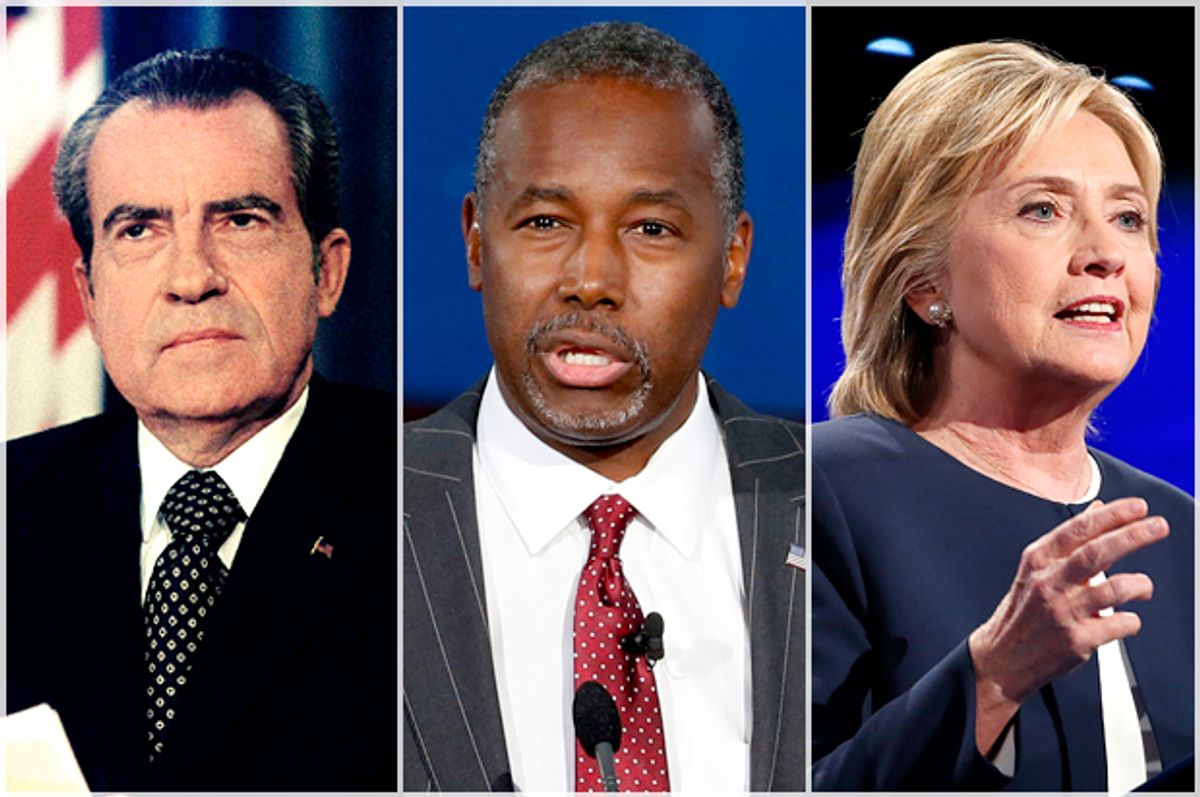 Call it what you like – fibbing, truth-stretching, or outright lying — but the sheer number of false or exaggerated statements from prominent politicians seems to have hit an all-time high.There's not just more lying, but the lies aren't going away. A Sunday New York Times story describes how “the old and powerful structure of the venerable news media as a gatekeeper, seizing on the candidates for any untruth and deeply wounding them in the process, seems to be crumbling, replaced by a more chaotic environment.”

Michael Barbaro’s story looked at untruths from Ben Carson, Carly Fiorina, and Hillary Clinton. “Deep disregard for the news media has allowed candidates to duck, dodge and ridicule assertions from outlets they dislike and seek the embrace of those that are inclined to protect them.”

Politicians have surely lied from the dawn of time. To understand the history and context, we turned to Jeremi Suri, a professor of history at the University of Texas at Austin. The interview has been lightly edited for clarity.

How new is the outbreak of lying in politics? I have a feeling we’ve had examples of it in the past as well.

What I think is different now, because of our modern media cycle and social media, is there’s an emphasis on bigger and bigger lies, as a way to grab headlines. And there’s an antagonism toward the media that plays well even in the media. Those two things together are contributing, I think, to the greater obviousness of the lying and perhaps a proliferation of slightly more of it than before.

Let’s talk about the past for a minute. Are there notorious, bald lies from American political history?

Though it’s hard to instantly fact-check a lie when someone tells you it’s a “secret.”

These days, does there seem to be a candidate leading the leagues in mendacity?

Well, I think they’re all doing a lot of it. But I think it would probably be Ben Carson.

But I will say, to be bipartisan about it, there are many things being said by Hillary Clinton that don’t check out fact-wise, a lot being said by Ted Cruz… It depends which week you ask me.

I think there’s more of it on the Republican side because there are more candidates and they’re struggling to get attention.

There’s a kind of arms race on the Republican side – you need to one-up the next guy.

That’s a good way of putting it.

Maybe there’s been another era with so many candidates – and with the truth getting bent out of shape because of the sheer numbers -- but I can’t think of one.

There’s a structural difference about the way elections happen since the early 1970s because of the development of the modern primary system. You have a much more public competition among parties for the nomination. You couple that with the fragmenting of the Republican party over the last 10 years, and you have something truly unprecedented in the number of candidates.

And it does something to the truth-telling, I think.

Is there an especially egregious lie going around these days?

So there’s a group of related lies, and very few people are telling all of them, but quite a few people on the Republican side are at least giving credence to some of them.

And to say those are lies is not to defend Obama’s policies. But these are bases on untruths. He was born in the United States; it’s wrong to say he wasn’t. He was legitimately elected…

What’s changed in the last few years? We have a faster media cycle and the force of the Internet. How has this changed the way lies circulate, or how they get debunked?

This creates a less mediated discussion – candidates can throw things out there, and there’s not an editor to fact-check. It circulates very quickly. And it becomes very difficult for the reader to separate fact from fiction, because the evidence can be doctored so easily. You can manipulate what looks real so easily.

And then there’s this competition to get things out – candidates lie so they can say something, and then they have to defend it.

But I don’t think that the media is the primary culprit here. There’s a very small number of people with a lot of money, and particular positions they want to be advocated. And they are financing lies.

You mean the Koch Brothers and so on?

I don’t want to single them out. But one of the consequences of too much money in politics, in too few hands, is it allows a few individuals, who believe things that might be untrue, to popularize their message. In a way that would have been impossible even 10 years ago in a less money-concentrated race.

Does the average voter -- and reader of newspapers and political coverage – notices or care anymore when untruths are thrown their way?

I think most Americans care – they care about untruths, about truthfulness, they think they are truthful [themselves.] But it’s become much harder to differentiate the truth from fiction, and most people don’t have the time and energy to do that.

And second, I say this as an educator, we’ve not spent enough time and energy educating people to be able to do that – preparing people.