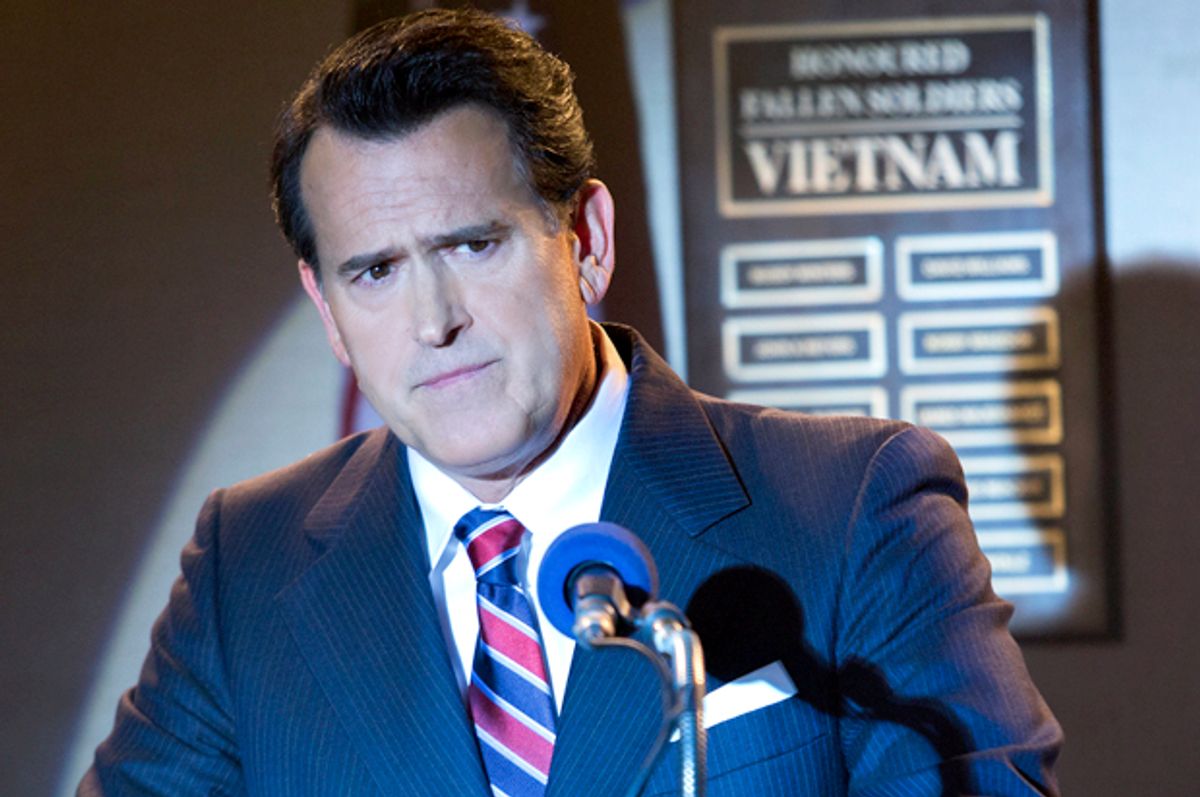 Voters in a presidential election year back a candidate for a variety of reasons, be it an alignment of values, depth of experience or, heaven help us, personality. Once that momentous November date finally rolls around – our rendezvous with destiny -- the winner tends to be the person who most effectively sells the American dream.

That thought seems laughable, given the tenor of the current presidential campaign and the quality of the contenders for the White House. But in “Fargo’s” 1979, when the dream weaver is Ronald Reagan (played to near perfection by Bruce Campbell), the citizens of Luverne, Minnesota, are buying.

Luverne is a small oasis of politeness in a barren, icy landscape, where terrible things are happening. The local crime family, the Gerhardts, has launched the first salvo in a war to halt a takeover by a Kansas City crime syndicate. Yet they still have time to hunt down a butcher’s assistant, Ed Blumquist (Jesse Plemons), drawn into their sights by his efforts to cover for his wife, Peggy (Kirsten Dunst), who happened to run down the idiot son of the Gerhardt clan, Rye (Kieran Culkin), during a nighttime drive. As is usually the case with homespun murders, the more the little guy tries to erase his connection to the crime, the deeper he sinks into the morass.

In the "Fargo" universe, and this refers to both the film and season 1 of FX’s anthology crime series, it’s the little things, the “oopsie” of it all, that propels the nicest characters to do the awfulest things. These are straight up crime tales layered with aw-shucks earnestness and a thick knit of Midwestern weird, in which good men such as this season’s protagonists, state trooper Lou Solverson (Patrick Wilson) and his father-in-law, Luverne’s Sheriff Hank Larsson (Ted Danson), struggle to mete out justice.

While season 1 felt like an extension of Joel and Ethan Coen’s 1996 film, season 2 has taken the architecture the Coen brothers built and created a parable about whether the American dream is still attainable. Yes, season 2 is set 36 years ago. Nevertheless, it speaks to our nation’s current emotional climate in a way that other modern TV period pieces have not.

Monday night’s episode, “The Gift of the Magi,” marks the second season’s halfway point, and its scheduling could not have been more brilliantly timed: It premiered the day before a Republican debate in which the current front-runners are a real estate mogul with orange skin and a bloated ego, and a brain surgeon who has a hilarious relationship with the truth, neither of whom has ever held political office.

Considering the parallels between reality and “Fargo’s” script is both entertaining and a little frightening. Reagan was California’s governor when he ran for president, but most of the nation knew him as a Hollywood actor. The difference between then and now is that Americans needed a brilliant sales pitch in his time; today, apparently, it’s enough that Ben Carson and Donald Trump have been blessed with outrageous confidence and are untainted by that evil known as political experience. Their popularity has baffled experts and frightened both average voters and mainstream Republicans.

Contrast this with Reagan’s campaign appearance in Luverne last night, tailored to deliver an injection of inspiration to his fellow Americans. Until this point in the season, the conservative legend has served as a mythical figure hovering in “Fargo’s” background, the ethereal hope few realized they were waiting for. This episode is the first time he has appeared in the flesh, and throughout the hour, via voice-over or in snippets, he speaks of a troubled and afflicted mankind looking to his fellow Americans – to the little folks, you betcha! – for hope, and urging them to help him transform the nation from one beset by a weak economy and fuel shortages into the shining city on a hill he envisions.

But that message may have come too late for the citizens of Luverne, who are at the crossroads of an explosive mob war and reeling from a multiple homicide committed on the outskirts of town. Good people suffer, in spite of the dreams and best intentions of great men.

Campbell’s Reagan is warm and self-assured — far removed from the actor’s usual campy persona — while capturing the spirit of Reagan as a showman, a guy who knows how to say all the right things but doesn’t necessarily have many good answers. In an exchange that’s humorous and devastating in equal measure, he asks Lou about his military service. Lou replies stoically that he served two tours on a swift boat in the Mekong Delta.

Reagan, losing none of his gubernatorial pompousness, attempts to relate by talking about his work on a World War II-era propaganda picture from 1942. “Bob Stagg was on loan from Selznick,” he growled. “That Nazi bastard had us cornered. We were done for. But in the end, with a little American ingenuity, we managed to, uh … oh no, no, no wait a minute – come to think of it, I don’t think we made it out of that one. Or did we? Oh shit, I can’t remember. Well, either way, it was a fine picture.”

Series creator Noah Hawley wanted to convey the idea of Reagan as a spectral force hanging over this era, in acknowledgment of the historical impact Reagan had on the nation. Thus he’s mentioned but never seen in the opening scene of the second season premiere, during an outtake of a movie where he’s left the actors waiting. More poignantly, he’s part of a defining memory for Fargo crime boss Dodd Gerhardt (Jeffrey Donovan); Dodd was christened into his life of violence during a father-son outing to catch a matinee of Reagan’s 1950 film "Moonbase Freedom."

Like every other Reagan film that has popped up during season 2 -- "Massacre at Sioux Falls," "Operation Eagle’s Nest" – "Moonbase Freedom" is a fiction, part of the service “Fargo's" Reagan renders to the larger theme of a nation aching for transformation in the wake of devastating warfare and economic deterioration, on the precipice of a new era.

The title of this week’s episode, meanwhile, references the ironic O. Henry story about a husband and wife’s sacrifices to provide each other with gifts they can no longer use, to illustrate what a mess the Blumquists are. As the episode begins, Peggy begs Ed to run away to California, but Ed is stubborn, stuck on his dream of owning his own business after this whole dead-guy-in-their-windshield business is behind them.

The Blumquist home is a maze of old magazine piles; Peggy, a hoarder, would rather cling to dreams stacked high on thin, glossy pages that whisper of a better version of herself, waiting to be actualized. She thinks the key to her transcendence is a nebulous seminar called Lifespring. By the time she comes down from the clouds and gets the money Ed needs to realize his plans, it’s too late.

Elsewhere the Gerhardts unleash a bloody ambush on Kansas City’s delegation, offing a local official in the process, which is in itself an irony; in seeking to protect their interests, they are on a road to annihilation, both from the syndicate and within. Where the Blumquists’ situation holds up a mirror to the fade-out of the American dream, the Gerhardts are a family business raging against the inevitable absorption into a larger corporate entity. Big business is a bloody game, especially in small town America at the dawn of the 1980s.

In a season ripe with surprising performances and superb, quotable writing, “The Gift of the Magi” may end up only being one of the better hours served up out of the second installment’s 10. But it delivered on its promise, largely by showing the viewer that some of life’s bleaker, brutal mysteries are timeless in their relatability, regardless of the era in which they take place.

As Lou Solverson bleakly observes during his conversation with Reagan, this is a sick world. “Do you really think we’ll get out of this mess we’re in?” he asks Reagan.

“Son, there’s not a challenge on God’s Earth that can’t be overcome by an American,” he replied confidently. “And I truly believe that.”

Lou smiles weakly. “Yeah. But how?”

Reagan responds by giving Lou a bracing clap on the shoulder and a winning smile, and walking away. Great politicians know that sometimes, the best way to keep selling the dream is by saying a whole lot of nothing. Thank you, “Fargo,” and thank you, Mr. President.