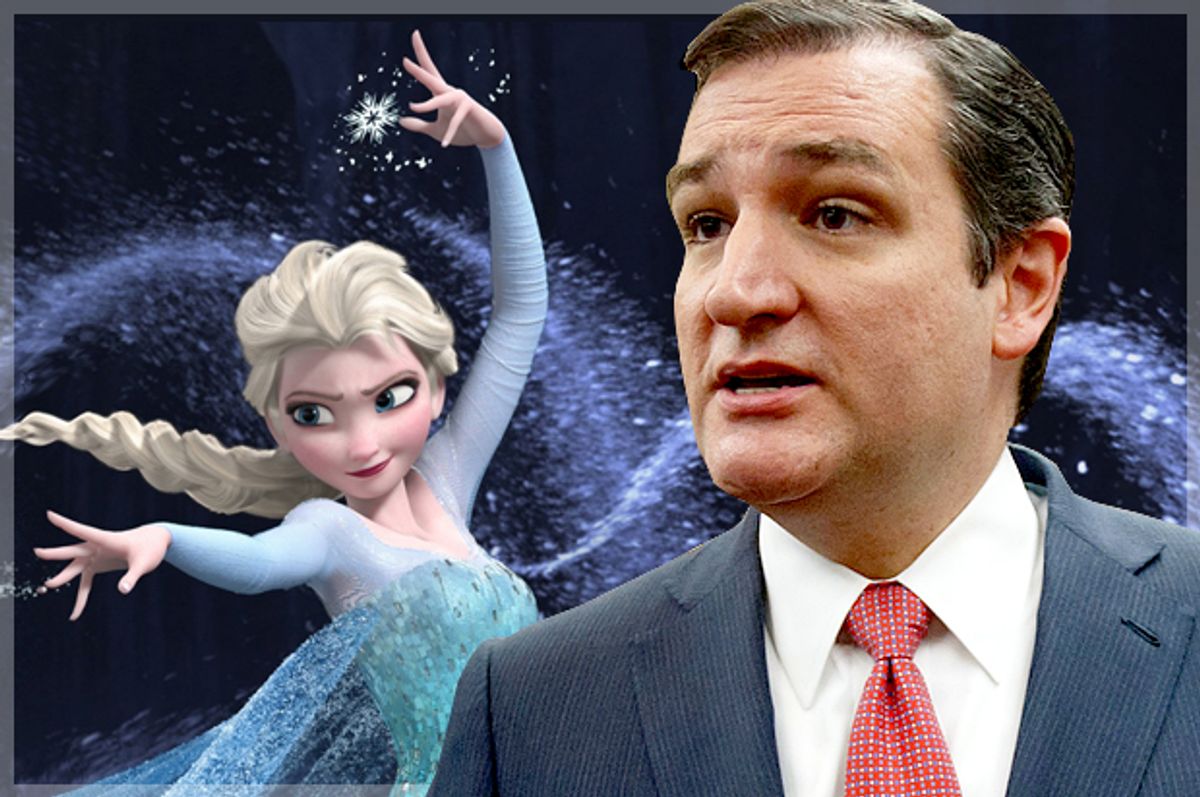 Going into Tuesday's Fox Business Channel debate, it's important to remember that the Christian right that currently runs the Republican Party really does think that women are too stupid to be allowed to make choices for themselves. Two separate news items are a reminder of how little conservatives trust women and how much they think women have to be held under firm, preferably male control---and how much this attitude influences the politics of the Republican candidates for President.

Over the weekend, candidates Ted Cruz, Bobby Jindal and Mike Huckabee attended the National Religious Liberties Conference, held by a group of hardline fundamentalists. Prior to the conference, I highlighted how the main organizer and many of the speakers have spoken approvingly of the death penalty for gay people, but the event itself was a reminder that they don't like women, particularly independent women, any better.

This was epitomized by a session at the conference run by Geoff Botkin of the Western Conservatory of the Arts and Sciences, about the perennial right-wing belief that civilization is on the verge of collapse. Botkin relied heavily on the Disney movie Frozen as evidence that modern America is in the thrall of Satan.  Yes, that cute little children's movie, which has gotten its fair share of right-wing stink-eye for having themes of female empowerment and independence, epitomized by the song "Let It Go." Brian Tashman of Right Wing Watch reports:

He likened “Let It Go” to Eve’s temptation by the serpent in the Garden of Eden, deriding the song as “Satan’s rebellion anthem” that corrupts children.

The popularity of the song and its “spirit of licentiousness” shows that people don’t want to follow the totality of the Bible, he said, warning that God “will chasten our nation” as a result of the movie’s popularity.

Even though the theme of the summit was supposedly "freedom," Botkin rails against the freedom this song celebrates, which he assumes must be "licentiousness." Needless to say, this Disney song for children is not about sex. But it is about a young woman who has been told her whole life to clip her wings and to treat her talents like a curse, and the song is about this woman deciding to say goodbye to all of that. While Botkin focuses on his fears of young women making their own sexual choices for themselves, it's clear that there's a general fear here of letting women make any decisions for themselves. Clearly, Botkin prefers the part of the movie when Elsa is locked away in her room, unable to share her talents with the world.

As Tashman says, this seething hatred of Frozen, which also has feminist messages about female friendship and not marrying before you know who you really are, is hardly limited to Botkin. The organizer of the event, Kevin Swanson, has railed about Frozen before, claiming that it will turn little girls into lesbians. The fear here is palpable: If women are allowed to be the authorities over their own lives, they might make sexual choices you don't like, and therefore they have to be locked away and kept under Daddy's firm control.

It's doubtful they'll do it, but the moderators at Fox News's debate should ask Ted Cruz if he agrees that Frozen sends a dangerous message to girls by telling them to be powerful and to be themselves instead of hiding away from the world.

Similarly, as Rachel Larris at Media Matters reports, a Fox-affiliated news station in Charlotte, N.C., ran a segment claiming, and feel free to laugh at this, that some doctor is "reversing" abortion in the area. The idea that you can "reverse" an abortion is a myth, promoted by some shady anti-choice doctors, that has been growing in conservative circles. It's not true. You can stop a medication abortion halfway through and the pregnancy may not terminate, but anti-choice doctors have been engaging in some unethical medical theater, injecting women with unnecessary shots to heighten the theatrics and make it seem like some daring attempt to "save" a pregnancy that was saved by simply not completing the procedure.

The theatrical silliness of "abortion reversal" may not have any medical value, but it does have significant value as political propaganda. The point of the shots and the supposed racing against time and the "saving" of the "baby" is all to drive home the message that women are too stupid and fickle to be trusted with legal abortion. It's all a pantomime to illustrate the anti-choice belief that women who choose abortion don't really mean it and that the silly and stupid dears immediately regret their girlish impulses and have to be saved from themselves and delivered to their true purpose, which is to have lots and lots of babies, ideally every time they have sex.

"Abortion regret" is a big deal in anti-choice circles now, and the reason for the myth is very clear:  The underlying argument is that women are too stupid to make their own decisions, and so need those decisions made for them by the state, acting on behalf of religious authorities.

This belief in the inherently stupidity of women getting abortions is tautological in anti-choice circles. They believe no woman really wants an abortion, so if a woman does choose an abortion, she clearly must be too stupid to be allowed the abortion decision. Of course, to people who don't think every woman, deep down inside, wants a baby every time she wants sex, this argument seems asinine, so "abortion regret" was invented in order to "prove" that women are as stupid as anti-choicers think. "See," the implied argument goes, "they regret it, showing it's always a bad decision, and one they shouldn't have been allowed to make in the first place."

The problem with this argument is that the real world evidence shows the opposite: Women do not regret abortions. A recent study of women who got abortions shows that 95 percent of women who get abortions say, both right after the abortion and years after the fact, that it was the right decision for them. It's hard to imagine any decision that people can make that has such high levels of satisfaction after the fact. The theatrics of rushing women to shady doctors who stick them with needles to mime "saving" a pregnancy that isn't actually terminating is all an attempt to distract people from the fact that nearly all women who get abortions feel that it was the right decision for them.

But the whole thing goes beyond abortion itself and, like with the paranoia over Frozen, shows a widespread fear and distrust in conservative circles of women to making their own decisions. Who knows what dangers await if women are allowed to be the authorities over their own lives? Better not risk it!