These TV hosts succeeded where Lorne Michaels' crew failed miserably. Here are a few of their finest segments 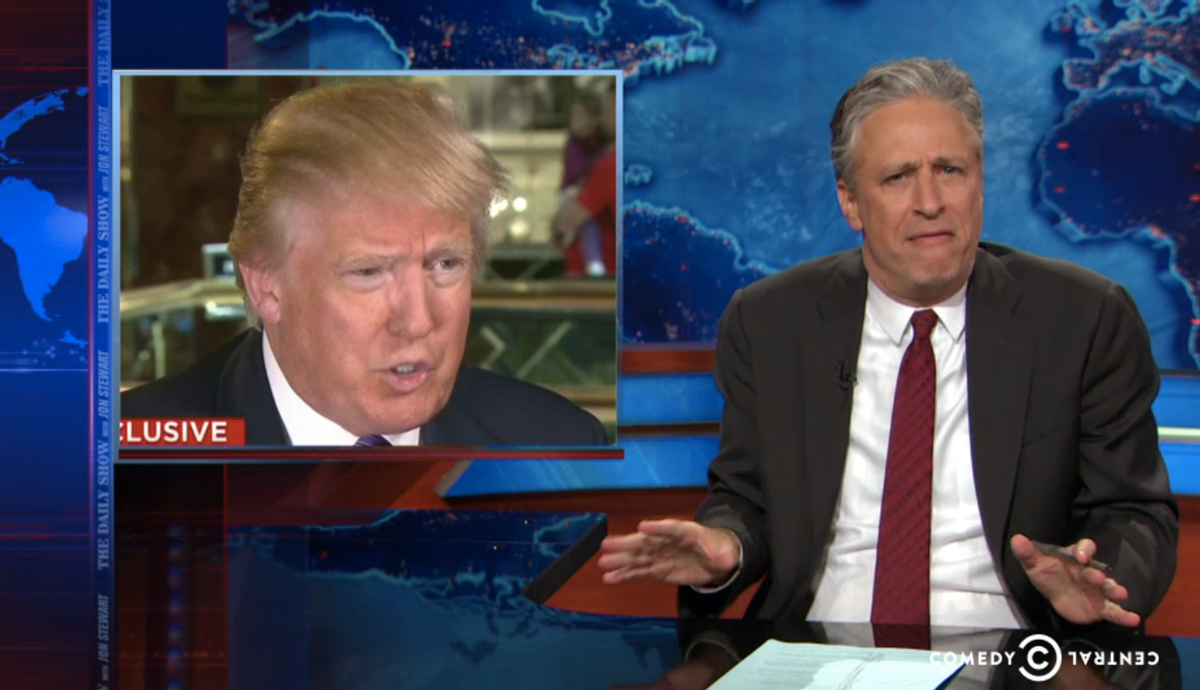 After the Saturday Night Live fiasco, it is abundantly clear that Donald Trump is not in the least bit funny. At least not on purpose. But the ill-advised show proved once again that he is ridiculous. (Pathetic is a word that also comes to mind.) In recent weeks Trump has returned to being a buffoonish parody of himself, not only when playing himself on Saturday Night Live, but in interviews, like when he cluelessly told Matt Lauer a few weeks back that he had overcome real adversity in life because he only received a small loan of a million dollars from his wealthy father. Even Matt Lauer was flabbergasted.

The real estate mogul has been a figure of fun since Spy magazine dubbed him the “short-fingered vulgarian.” When Trump declared his candidacy, Jon Stewart nearly canceled his retirement from the Daily Show. Topical comedians bowed down to the comedy gods for the gift. Their writers worried about unemployment, since the jokes issued forth fully formed from the Donald’s lips.

But then Trump’s frontrunner status lasted longer than anyone expected, and his ignorant demagoguery about Mexican immigrants began to inspire real-life thuggery. Trump wasn’t funny anymore. True, there has long been a heinous strain of unfunny with Donald, between his calls for the death penalty for the now-exonerated Central Park Five to his insistence that Obama was not born in the U.S. and could not have attended Harvard.

But once a narcisstic buffoon always a buffoon, and though SNL failed to make proper fun of Trump, others have succeeded admirably and memorably. Here are some of the top comedy bits on Trump.

1. Stephen Colbert: Mr. Trump, you look like a million dollars.

Despite the fact that Colbert’s “Late Show” is considerably less hard-hitting than his old gig, Colbert managed to skewer Trump’s irresistible tone deafness on the subject of the million-dollar loan from Papa. Not only did Trump bizarrely cite the loan as an example of the obstacles he has faced on the road to making it big, he proceeded to claim that a million dollars is nothing compared to what he has made, so inconsequential.

Colbert then told the tail of young Donald’s dangerous voyage from the out boroughs to Manhattan as if he were part of the impoverished, huddled masses yearning to be free. “Donald dared head out to a land that he didn’t already own...leaving his family blocks behind,” Colbert recounted. “Like so many immigrants before him, when he cast his eyes upon the glimmering beacon of the Statue of Liberty and thought ‘Eh, she’s a six maybe a seven if she had a bigger rack.’"

We can’t do it full justice, because it’s great. Watch here:

2. Jon Stewart: “Don’t flame out now, I got three more weeks of this!”

Jon Stewart was really burnt out when he retired from the Daily Show after 16 years. Nothing could have changed his mind, but Trump almost did. He sure made Stewart’s final weeks a hell of a lot more fun. One of the funniest segments came after the kerfuffle Trump caused when he insulted John McCain’s war record. “He’s only a war hero because he was captured,” Trump said. “I like people who weren’t captured.”

Everyone thought that was it for Trump, bedtime for Bozo, but of course it wasn’t. It only sent his poll numbers higher.

Stewart went to town. Imitating Trump’s thuggish arrogance, he said: “I like people who don’t get cancer.” This was merely the jumping-off point to hilarity. To a tape of Trump complaining how everyone insults his hair and no one comes to his defense so it’s okay if he insults women’s looks, Stewart couldn’t resist.

“First things first,” Stewart said. “Your hair is not fine." Stewart acknowledged the immaturity of picking on a man's hair, but, "That hair, that is comedy entrapment. People are not attacking your hair, they are defending themselves from something that looks like it’s going to attack them.”

There was lots more, including mockery of the terribly painful bone spur that kept Trump out of military service.

Stewart begged Trump not to flame out. “I so love this man. I feel he’s like a Jewish holiday waiting to happen. ‘We thought the craziness would only last a day. But by a miracle it burned for eight days, we should call it holyshitukkah!’”

When Trump announced his candidacy, Larry Wilmore had not been host of The Nightly Show for long. And arguably, Wilmore has been getting better and more pointed lately. Trump’s announcement was a gift for the fledgling late-night show, and Wilmore celebrated: “It’s Trump’s announcement that he is running. Good news for me, horrible news for our writers. All of the jokes write themselves.”

Wilmore then featured a mashup of Trump ridiculousness while chowing down on some ribs and string beans, including many short cuts of Trump talking about how rich and loved he is, and that he doesn’t want to brag—the whole crazy word salad, or as Stewart called it, projectile vomit of dickishness. But nothing could come between Wilmore and his comedy feast.

When Bill Maher went on the Tonight Show in early 2013 and joked that the Donald was the spawn of an orangutan, Trump responded by threatening to sue the comedian for $5 million. There is only so much ribbing Trump can take about his hair, and this one really hurt.

Maher furthered the mockery by saying he would pay $5 million if Trump could prove he was not the offspring of Mama Trump and an orangutan, riffing on Trump's offer to donate a large sum of money to charity if President Obama would release his college records. The whole joke was a riff on Trump’s persistent racist birtherism about Obama, which even the president’s birth certificate has not placated, and certainly would not have been allayed with college records.

Not understanding the joke, Trump did produce his birth certificate and then filed a lawsuit when Maher did not pony up his obvious parody of an offer. Trump eventually withdrew the ridiculous suit, but promised to refile because it’s not like he could ever admit to being the absurdly petty human being that he is.

More recently, Maher spoofed Trump’s vile comments about Mexican immigrants in a monologue about “Fucking Australians!” flooding our shores, an influx no one seems to be lamenting. Hmmmm. Wonder why.

“Australia is not sending us their best people,” Maher said. “They’re bringing drugs—yes, enough for everyone, but still. They’re rapists, okay not rapists, but they do a lot of fucking. And I assume some of them are good people.”