The GOP debate was a blizzard of garbage: Sorting through last night's mess of lies and crazy 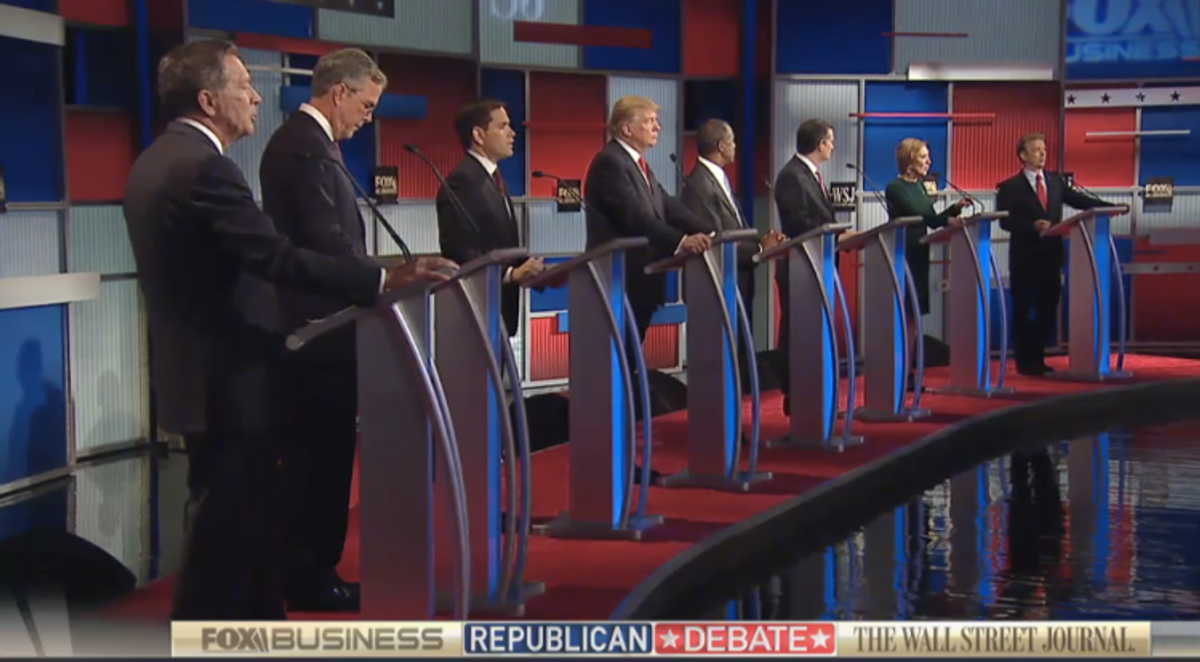 There was a moment just into the second hour of Tuesday night's debate that might have been the only honest exchange during what was otherwise a two-hour slog through a septic tank overflowing with bullshit. It came when Marco Rubio answered a moderator's question about the cost of the childcare tax credit in his deficit buster of a tax plan. His Senate colleague Rand Paul challenged him on both the cost and whether such an expensive item could even fairly be called conservative. Suddenly there was a face-off on the stage, a little crackle of electricity. These two human-shaped nullities of fetishistic sloganeering stood poised to have a conversation unencumbered by the edifices of misdirection that Republican candidates have to erect to keep the base from noticing it is basically the proverbial frog in a pot of boiling water, sitting calmly while the plutocrats who run the super PACs grab every bit of the nation’s wealth that isn’t nailed down.

For just a second, it was possible to glimpse an actual debate in the middle of this blizzard of garbage. Here were two men representing competing strands of the Republican Party – the libertarian wing of Rand Paul versus the heirs to Reagan’s tax-cuts-and-imperialism-because-AMERICA branch that has found in Marco Rubio its perfect, pliable spokesman. Here was a meta-debate in the making, with a child tax credit as the Trojan horse by which the GOP would smuggle into the silly season a meaningful talk about the contradictions between its conservative philosophy and its actual practices, the entire existential crossroads that the party has been standing in front of since the George W. Bush administration.

Alas, that would make for lousy television. The moderators jumped in and got everyone back on track, teeing up the candidates' talking points with fat pitches grooved right down the middle of the plate. Instead of a sober assessment of conservatism’s place in a fading late-capitalist empire bereft of the infrastructure to care for its people, we got a conversation so far outside the known universe it might as well have come from the other side of that wormhole in “Interstellar.”

And to think, before the debate an anonymous aide to one candidate had sounded a cautionary note about the moderators because Neil Cavuto once interned in Jimmy Carter’s White House. Turns out that, shock of shocks, no one needed to worry that the affable Fox talking head would morph into Jack Anderson the moment the red camera light went on. Cavuto and co-moderators Maria Bartiromo and Gerard Baker were so gentle they could have been whispering their questions into the candidates’ ears as the presidential aspirants drifted off to sleep snuggled in toddler beds beneath bedroom ceilings festooned with glow-in-the-dark stickers of moons and stars.

And my God, the nightmares they must be having after the adults finish the lullabies and slip out of the room. Every presidential campaign is going to exaggerate the terrible horrors inflicted on the country by an incumbent of the opposing party. But to hear the candidates talk, you’d be forgiven for being too afraid to open your front door, so convinced are you that your friendly neighborhood has been replaced by a smoking hellscape where scimitar-wielding Islamists, having established a caliphate, now roam a once-great nation ruined by Barack Obama’s feckless energy policies and Medicaid expansions. Where Vladimir Putin – “basically an organized crime figure that runs a country,” in the sophisticated geopolitical patois of Marco Rubio – is running rampant and will only stop when we start blowing his warplanes out of the Syrian skies.

On and on they went, throwing out meaningless buzzwords mainlined straight from the deepest corners of Daily Caller comments threads. Elect one of these jamokes, and they will keep you safe! Of course you will have to work more years for no pay, since all of them are in favor of raising the retirement age but not the minimum wage. Oh, and you won’t have any health care while working those longer hours farther into your dotage, because all of them will pull Obamacare out by the roots and replace it with nothing.

The candidates all did what they do. Donald Trump spouted his usual bluster. Ben Carson, as always, was his normal sonorous self. For all I know, he was taking naps standing up at his podium whenever the moderators were talking to someone else. Jeb! Bush still seems like he’s trying to play catch-up to the craziness that the party once ruled by his family has devolved into. John Kasich was prickly, whiny and ineffective. Ted Cruz is a pompous gasbag who might as well just shout “The Constitution!” as his answer to every question. Carly Fiorina repeated her unhinged foreign policy prescriptions from the second debate, when she basically promised to start World War III with Russia.

Which brings us back to Paul and Rubio. Conventional wisdom holds that the latter has the best shot at the nomination after Carson and Trump collapse. (Any day now…) I still don’t get the hype. Rubio’s strongest skill seems to be repeating nonsense as his voice climbs the register, as if saying bullshit LOUDER AND LOUDER will make it come true. (At one point he claimed that America’s banks have gotten too big because they are over-regulated, a pronouncement that surely had Elizabeth Warren throwing briefing books at her TV.) He’s a master of answers that are long on aspirational hokum – hey, did you know his father was a bartender? – and short on policy prescriptions that haven’t been hand-fed to him by AEI “scholars.”

But so what? The entire Republican primary, and really the entire party, exists somewhere outside the bounds of space and time. There is no reason to think they are ever coming back to Earth.