"The horror makes the thrill": Why the New York Times' "beautiful" war images of death and destruction won't change many minds

With the transformations in digital media, we're living in an age of “pump-you-up-to-kill-the-bad-guys videos” 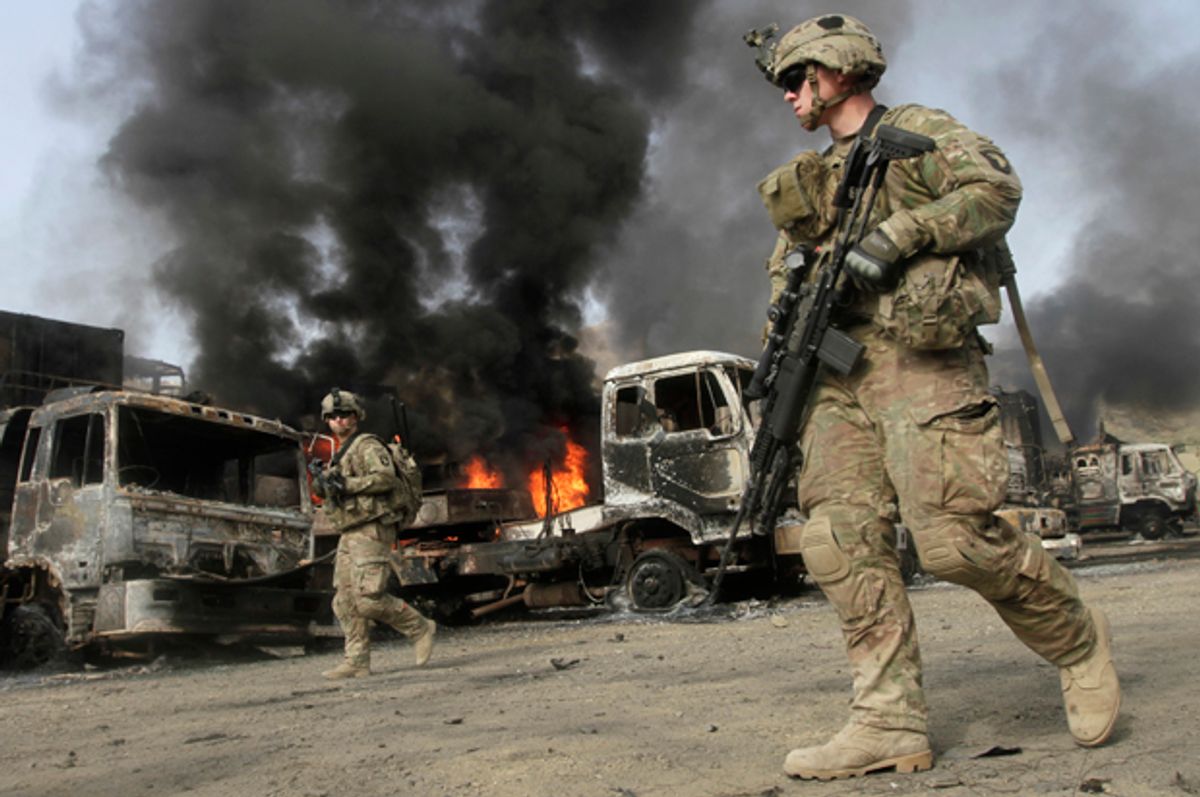 The great Harvard philosopher and psychologist William James said it best.  Speaking during the first decade of the last century, he warned that turning away from massive-scale industrial warfare “is going to be no holiday excursion or camping party.”  War has evolved into something “absurd and impossible from its own monstrosity,” James counseled, but don’t assume that documenting its “expensiveness and horror” will change many minds: “The horror makes the thrill.”

James’ intuition covers all too much of the human condition, including the early-21st century American inability to see war for what it is.  This base incapacity comes into clear view in the book “War Is Beautiful,” a decade-long compendium of front-page war photographs from the New York Times along with author David Shields’ commentary on how the newspaper has been complicit in selling the Iraq and Afghanistan conflicts via its “pretty, heroic, and lavishly aesthetic image selection.” The Times' photo-editing process is a manipulative act, Shields charges:  It’s taken military conflict’s massive death and destruction and “filtered” that “reality” into the stuff of art, images for the eye to behold rather than take in as abject lessons in historic catastrophe.

Shields makes a powerful case, but he doesn’t go far enough. Individual blindness to war has evolved into a master cultural complex, a cross-institutional block on the civilian populous overseeing its nation’s prolific projection of military power.

More particularly, with the Iraq and Afghanistan wars, we can point to a new digitized “eye for battle” in the U.S. military and American culture overall. Springing from the intersection of the post-Sept. 11, 2001, wars with the digital revolution, the eye for battle couples high-tech sensors for killing from ever-greater distances with a visual culture of motion pictures and video simulations that eroticized and modeled the action and violence of ground war.

That this promise hasn’t been realized in the War on Terror is widely recognized, while the twin impulses of omniscience and risk-free war-fighting behind it continue to drive U.S. military development and doctrine.  To be sure, predator drones spark protest and debate, but few if any officials responsible for such decision-making expect or want their use to be stopped.  On the heels of drones are fully automated weapons systems, including the combat robot, replete with day and night video cameras and thermal imaging that feed into its artificial intelligence uploaded with rules of engagement and moral code. The Iraq and Afghanistan wars have made up a bridge to post-human war-fighting. They may be the last major conflicts in which the United States relies primarily on human ground troops.

Alongside the technological enterprise of seeing everything and separating the killers from the killed, the digitized eye for battle has also closed in on the action of war, capturing its violence, and eroticizing its destructiveness and passions.  The transformations in digital media over the past 20 years include rapid advances in the synchronic capturing and sharing of moving pictures with affordable video cameras and smartphones and through the Internet. U.S. troops in Iraq and Afghanistan, armed with digital cameras, some on their helmets, shot footage of their fighting and its results, while editing software allowed them to piece together films from camp, often overlaid with heavy metal soundtracks. So began digital “war pornography” for American soldiers and Marines--and the tens of millions of the genre’s YouTube viewers.

An equally powerful component of the eye for battle has been first-person shooter combat video games--played, used and enjoyed by recreational gamers and military recruits alike. In partnering with the armed forces, video game producers turned to newly minted combat veterans in the early-2000s for uploading into their works the official tactics and the real look and feel of fighting in Middle Eastern streets. The Pentagon wanted the games to achieve “virtual presence”—the subjective sense of physical immersion in a foreign “combat environment”—which, in turn, would produce “virtual veterans”—freshly deployed troops with memories in mind and body of having already “been there,” in combat operations.

On Veterans Day, we’d do well to think about the vast limitations of the eye for battle. Instrumental in motivating young Americans to enlist, fight and kill, the eye for battle is woefully incapable of mediating the destruction that’s always at the center of war’s making. The dissonance between the excitement of combat in the mind’s eye and the physical, psychological and moral degradation in fighting helps explain the titanic psychic struggle that many U.S. military veterans experience once they come home. Perhaps the best way to honor their service is to look critically at “the eye for battle” in modern warfare and culture and make a concerted effort to take less thrill out of the horror.

John Pettegrew is an associate professor of history at Lehigh University and the author of “Light It Up:  The Marine Eye for Battle in the War for Iraq.”

John Pettegrew is professor and chair of history at Lehigh University.