Where has this Rand Paul been? Why he was the GOP debate's surprising winner

He won't win. But sizing up last night's main-stage candidates, it's clear Rand Paul came out ahead 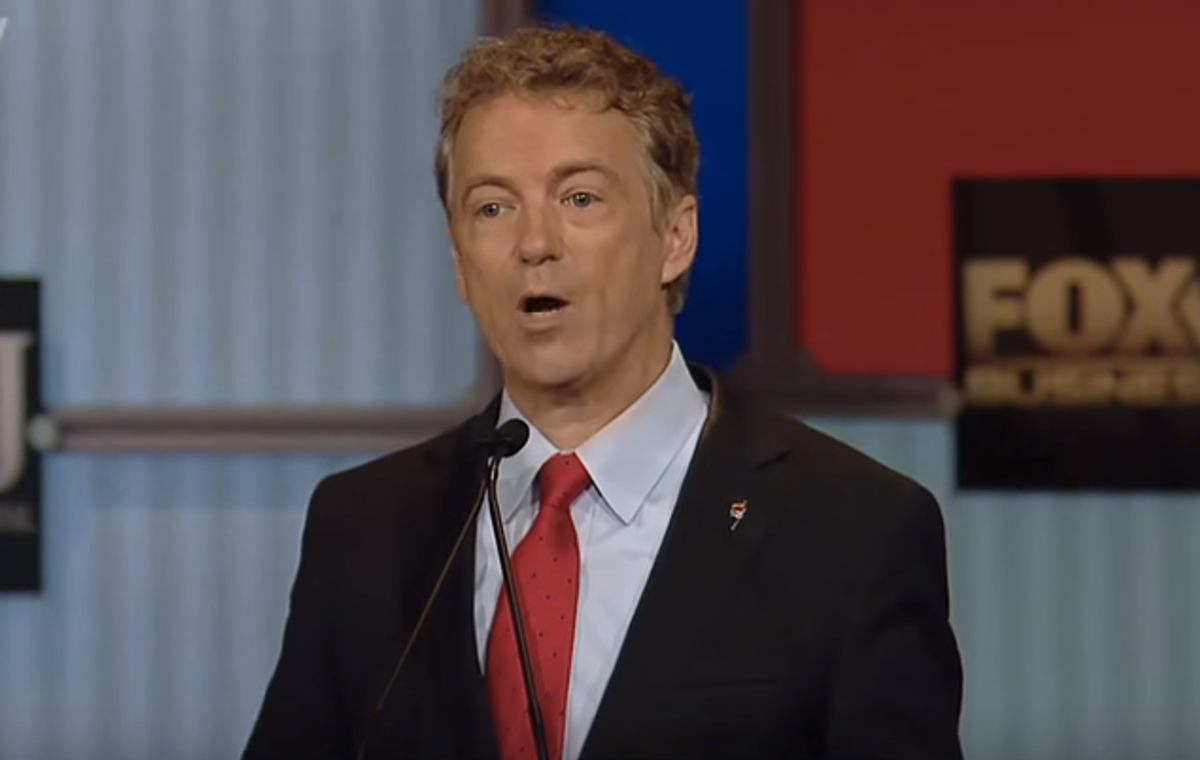 The fourth Republican presidential debate looked and sounded a lot like the last three debates. There were fewer candidates on the stage, but plenty of trite clichés and fact-free proclamations. A winner rarely emerges in these debates, but in this care it’s fairly clear who won: Rand Paul.

Paul is not going to win the Republican nomination – let’s just get that out of the way. After a series of compromises with the GOP establishment, he has failed to energize the libertarian wing of the party, the Paul family's true constituency within the GOP. Rand has, however, been one of the only reasonable voices on the stage in every debate thus far, with the possible exception of John Kasich.

Before last night, Paul was mostly an afterthought, barely able to get a word in edgewise. But he got plenty of airtime in this debate, and he used it to beat back the hypocrisy of blowhards like Ted Cruz, Carly Fiorina and Marco Rubio. After listening to Rubio and Fiorina boast about their bloated defense budgets and the need to “keep America safe,” Paul gently reminded them that telling the poor to tighten their belts while subsidizing the military-industrial complex isn’t conservative – it’s incoherent.

Paul also pounced on Fiorina’s foreign policy bellicosity. Fiorina insisted she wouldn’t talk to Vladimir Putin, but would instead surround Russia with American troops and missiles (evidently with no negative consequences), because America has to “have the strongest military on the planet and the world has to know it.” (Is it not already apparent that the U.S. has the largest military in the world?) Here Fiorina was echoing Rubio, who, like many of the Republicans, spoke as though our military consists only of water pistols and JROTC troops.

There are plenty of reasons to oppose Rand Paul’s political philosophy, but at least he has one, and it’s both coherent and consistent – that was evident last night. On taxes and foreign policy and domestic spending, Paul was the only candidate willing to say unpopular things before an audience (and a party) who wants nothing but red meat rhetoric. Paul won’t be rewarded for this, because the GOP lives in a bubble and wants affirmation more than information, but I applaud him nevertheless.

I’m tempted to say Donald Trump and Ben Carson stumbled last night, but that’s only true if you judge them by normal standards. Trump couldn’t answer a single question he was asked. His approach is to use the words winning, China, deal, losers, billions, Mexicans, wall, America, and energy in a different order every time, and hope no one notices the act. This has worked for him in previous debates and I see no reason why it will hurt him this time.

Carson wasn’t much better. Like Trump, he has no clue what he’s talking about, but he ends every remark with a charming anecdote that makes everyone forget what the original question was. His policy on Syria, for example, was to make the Jihadists “look like losers” and “we’ll win” – that’s it. There was nothing about the complexities of the region or the dangers of interventionism. And there were no follow up questions. Carson just said he knows his plan will work because he’s “talked to generals.” These are the same gaseous responses Carson has proffered at every other debate, and his numbers have improved each time. I doubt he gets a bump after this debate, but he didn’t hurt himself last night.

This was a crucial debate for Jeb Bush, and he failed once again to move the meter. His poll numbers are in free-fall right now and he’s losing the confidence of many of his financial backers. More than anyone else, Jeb needed to assert himself, to look presidential. But he’s not able to project strength on that stage.

Rubio has passed Bush in the national polls and last night it was evident why: Rubio looks like the future; Bush looks tired and entitled. The establishment was already shifting from Bush to Rubio, as this report in Politico shows. Anyone wary of Jeb before the debate likely walked away more convinced that his campaign is a becoming more and more of a long-shot cause.

Kasich performed reasonably well, but he’s not extreme enough for the conservative base. His moderation has no place in the Republican primaries. His big selling point is his executive experience, but that’s a non-starter in this climate. Trump and Carson’s success shows how little Republican voters value actual political experience.

Fiorina and Cruz did what they’ve done in previous debates. Fiorina’s great skill is convincing the crowd that the prepared speech they just heard was actually extemporaneous. She did this with aplomb last night. Cruz wasn’t as active in this debate as he was in the last one, but he didn’t need to be. His strategy is to continue coasting until Trump and Carson collapse, at which point he’ll emerge as the consensus outsider candidate. Cruz didn’t score any obvious points last night, but he did what he needed to do – and that’s enough.