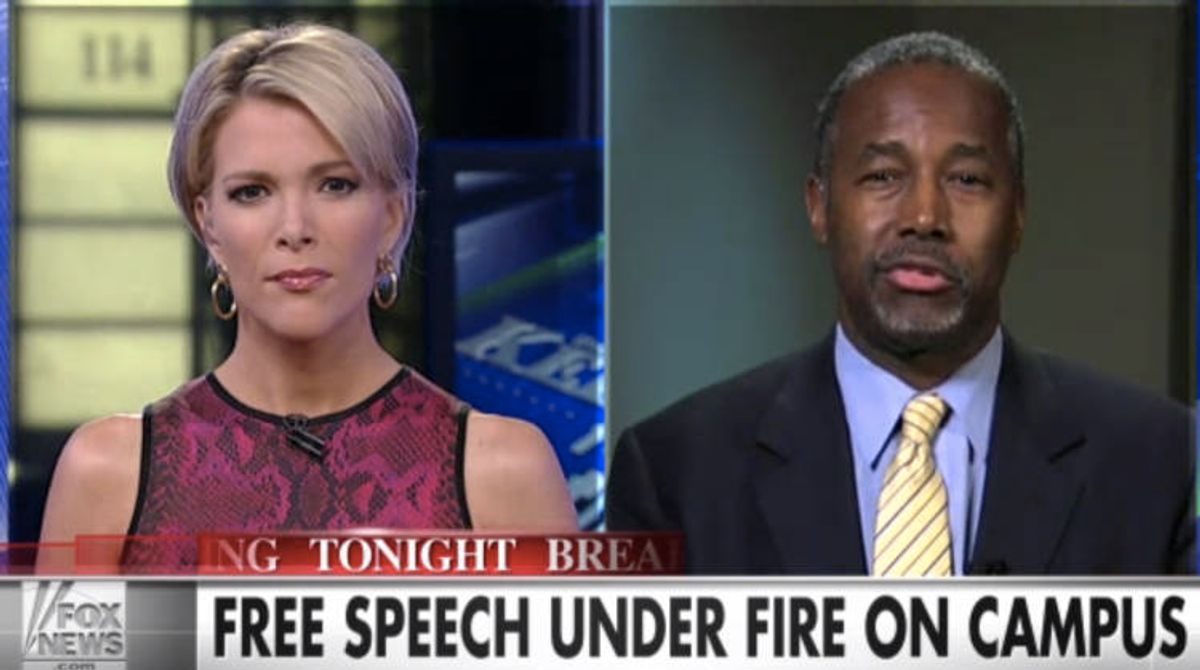 Fox News host Megyn Kelly kicked off her Wednesday evening program with a breaking news banner announcing "new evidence that what started with a campus protest in Missouri, may be spreading to more colleges and universities," referring to protests on the campuses of Yale and Ithaca College, and dedicating much of her program to slamming the student-led movements with Yale alum Ben Carson.

Kelly first described the University of Missouri boycott and protests as "a small group of angry black students managed to force the resignation of the two highest ranking officials at that school" for her viewers before asking the Republican presidential candidate to help clear up her confusion over the kerfuffle.

"What are we doing to tomorrow's generation?" Kelly cried out, asking Carson why today's black youth are unable to toughen up and face reality like Carson had done coming up from his "hard scrabble background."

"What do you make of these students who are with the dean of Yale saying, you can't wear offensive Halloween costumes. Offensive in the mind of whom? Who's to decide? I mean, anything could be potentially offensive. And so, the message was just don't do it."

"We're being a little bit too tolerant," the good doctor responded. Carson then blamed school administrators for "accepting infantile behavior" from coddled students and decried campus safe spaces as "unconstitutional" and leading to widespread anarchy:

To say that I have the right to violate your civil rights, because you're offending me is un- American. It's unconstitutional. And the officials at these places must recognize that and have the moral courage to stand up to it. Because if they don't, it will grow, it will exacerbate the situation, as we will move much further toward anarchy than anybody can imagine and much more quickly. We simply can't allow those kinds of things to happen.