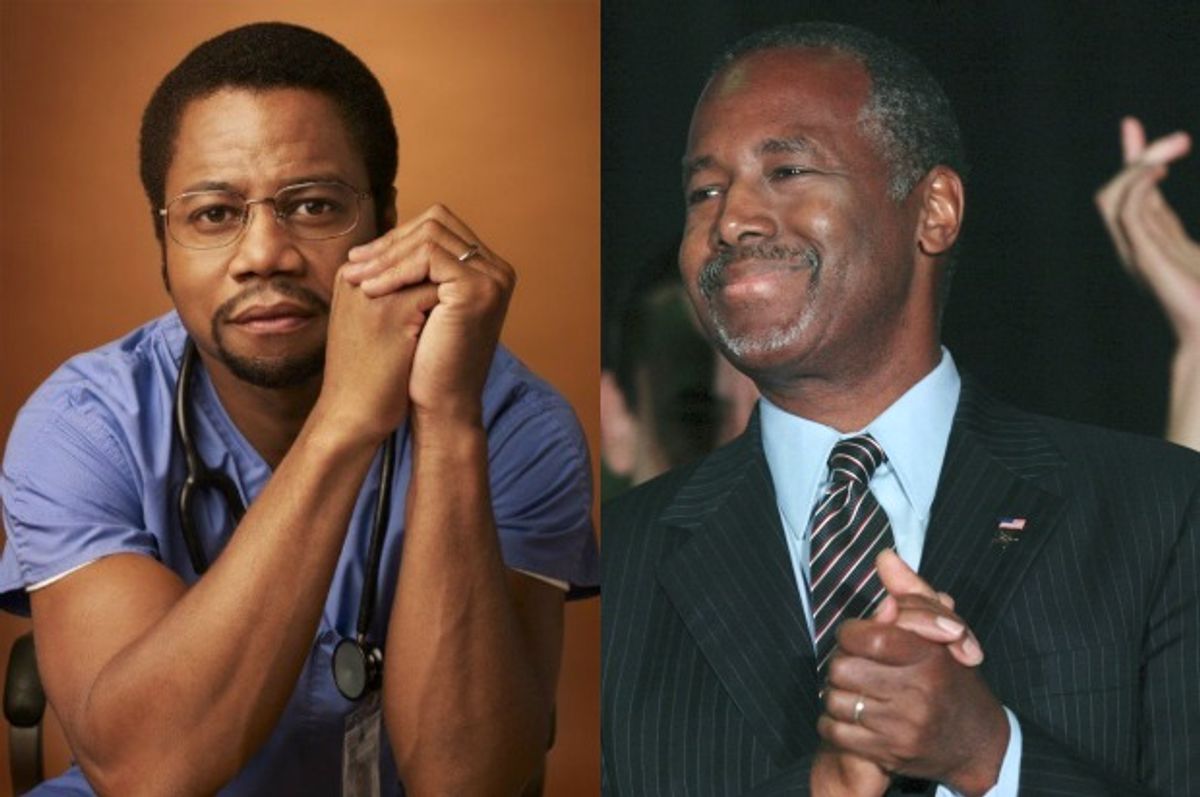 You might be aware that Ben Carson is running for president, but what you might not know is that he’s also the hero of his own movie— that is, depending on how you define the words “movie” and “hero.” Before he was the target of intense scrutiny for the Horatio Alger-esque story he spins in his autobiography, that tale was the subject of a made-for-TV movie adaptation that aired on TNT in 2009. "Gifted Hands: The Ben Carson Story" was seemingly designed for faint praise. After watching the movie, you might find yourself saying things like: 1) “I liked how … professional it all looked. 2) “Hey, none of the sets fell down!” 3) “They did a good job of pointing the camera at all the actors.” 4) “The lighting was great.” 5) “Wow, there was so much movie in that movie!” 6) “It wasn’t the worst film I’ve ever seen.”

If that’s reminiscent of the classic "30 Rock" segment where Liz Lemon has to find ways to avoid telling Jenna she hated her movie (“Oral Germ Whore?”), that’s because every moment in "Gifted Hands" feels like a "30 Rock" parody. In Tracy-Jordan-as-Amadeus fashion, we’ve got Ben Carson (Cuba Gooding Jr.) rummaging through a giant pile of books as he embarks on his masterpiece: separating conjoined twins. (The movie even heavily features classical music—just to underscore the connection.) Elsewhere, nearly every scene from Carson’s childhood appears to be an outtake from "Hard to Watch (Based on the Novel Stone Cold Bummer by Manipulate)": He can’t read! His mother can’t read! She’s in a mental hospital! He tries to beat her with a hammer!

Of course, these obstacles are introduced to show how “inspirational” Ben Carson is—overcoming immense struggle to become the worst candidate currently running for president. But it’s not that Carson “beats the odds” in "Gifted Hands" as much as the film introduces an absurd amount of plot points just to discard them minutes later—the movie’s equivalent of having him jump over hurdles that are one inch off the ground. At the beginning of the film, Carson is failing school—but just scenes later he’s a spelling bee champion and science genius. Just minutes afterward he falls in with the bad crowd (he even stabs a guy!), but don’t worry: He’ll still get into college the next scene, and we won’t discuss that whole stabbing thing again.

It’s not just that "Gifted Hands" burns through plot at a pace that would give the writers of "Glee" pause, but that no one involved with the film seems to have the slightest idea what scene transitions or pacing are. We spend an absurd amount of time watching Ben Carson study for school, but later, his wife’s miscarriage is wrapped up in approximately 30 seconds, as if it’s no big deal. (He’s even back at work the next scene!) Once we get to the dramatic conjoined twin separation, featuring the worst baby CGI outside of "American Sniper," "Gifted Hands" spends such a long time watching the hero practice medicine that the movie is actually hard to watch. You might find yourself struggling to stay awake.

If your own boredom is the biggest obstacle to be overcome in "Gifted Hands," the actors don’t look any more thrilled to be there. Playing the oldest student in the history of film (Stockard Channing should turn in her poodle skirt immediately), two-time Razzie nominee Cuba Gooding Jr. looks lost and confused; sporting Carson’s trademark goatee and glasses, his performance is less reminiscent of a “world famous doctor” than Eugene Levy's in "A Mighty Wind." Kimberly Elise ("John Q," "For Colored Girls") is much better as Carson’s mother, Sonya, but the movie all but forgets that she’s even in it. The same is true of Ben Carson’s wife (played by Aunjanue Ellis), whose role is so unimportant they don’t even bother to stage a Meet Cute for the couple.

This is because there’s no one in the film more important than Ben Carson. As Gawker’s Rich Juzwiak astutely pointed out, there’s a difference between a vanity project and vanity itself—and this is certainly the latter. If "Gifted Hands" seems to ignore a lot of the basic things that make a movie work (like character development or sticking to a consistent plot), that’s because it’s not a film at all: It’s a pamphlet for conservative ideas of pulling yourself up by your bootstraps. Just like the book before it, "Gifted Hands" reminds us that literally anyone can live their dreams—so you have no excuse.

In what has to be the film’s most egregiously awful scene (of which there are many), one of Ben Carson’s middle school teachers actually says this. After Carson wins his first spelling bee, a faculty member interrupts the applause for an important message: “Benjamin is a boy of color. He has no father in his life. He comes to us with tremendous disadvantages. There’s no reason you shouldn’t have done better than him. What’s wrong with you kids? You’re not trying hard enough. You should be ashamed.” A reaction shot—scored by melancholy tones—of Carson’s incensed mother shows that she’s clearly outraged by these remarks, but "Gifted Hands" never rebukes them. And given the fact that the film reminds us ad nauseam that his father left, it only encourages these ideas.

If "Gifted Hands" is part rags-to-riches story and part hero myth, its politics are all bullshit—and according to some critics, the source material might be full of it, too. In recent weeks, Carson’s origin story has come under fire because it’s all but impossible to fact-check. (His mother has Alzheimer’s and his brother, barely seen in the film, won’t comment on Carson’s past.) For instance, Ben Carson claims that he shielded white students during a riot at his high school, but no one remembers that happening. This scene doesn’t make it into the film, but the Washington Post raises doubts about some of Carson's own story. “[N]one who knew Mr. Carson as a youth recalled any such trouble,” the Post recently reported. “Instead, most of Mr. Carson’s former friends and neighbors remember him much as he is today: soft-spoken and studious.”

No one should be expecting "Gifted Hands" to be a documentary, but if you’re hoping to learn something insightful about the mild-mannered candidate by watching it, you’re in the wrong place. "Gifted Hands" doesn’t care about being a true-to-life portrayal of overcoming urban poverty or the struggles that black families face. Its team seems to have abandoned the pretense of caring if the movie itself is any good, either. The only reason this movie even exists is to flatter Ben Carson’s considerable ego. "Gifted Hands" might not be the worst TV movie you’ll watch this year, but it’ll certainly leave a bad taste in your mouth.