A Bloomingdale's ad is criticized for being a rape joke, but it also feeds the creepy concept of the "friend zone" 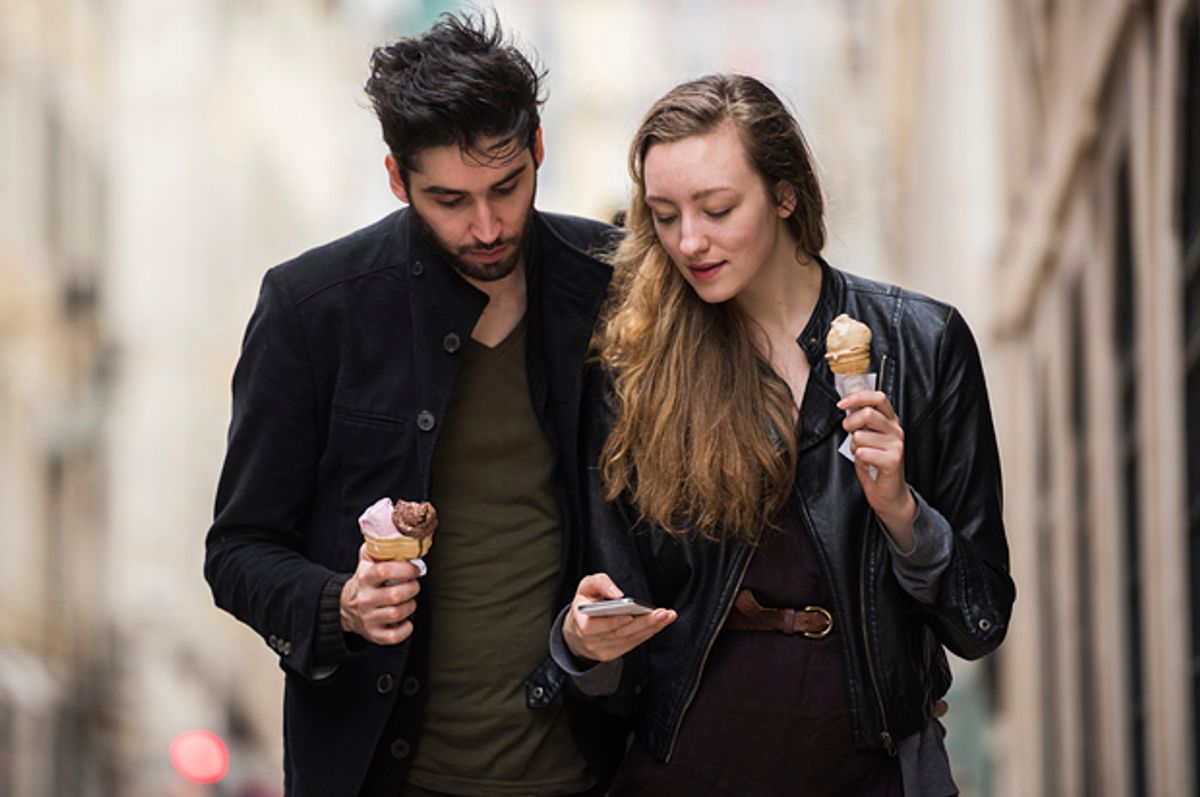 Every time a feminist uses the term "rape culture"---a term that describes a culture whose ostensible disapproval for rape is belied by the tolerance and even winking approval of forcing sex on non-consenting women---they are met with a series of skeptical jeers from people who think that it's  ridiculous to think that anyone actually thinks rape is funny or cool.

How then to explain this ad from Bloomingdale's---which is just one in a series of ads from other companies making similar jokes---which only works if you assume an audience that thinks it's funny and even sexy to refuse to take "no" for an answer.

Fascinated that throughout the editing process, nobody suggested this Christmas ad is a bad idea #Bloomingdales pic.twitter.com/zUaNJnlK7y

Bloomingdale's apologized for the rape joke in the face of widespread outrage, and many media outlets used this as an opportunity to educate audiences on the way that rapists use alcohol to facilitate their crimes, by either targeting women who have had too much to resist or even by drugging them to get the same effect.

But there's another aspect to this that has been under-discussed, which is the way that this ad speaks to and promotes male entitlement, the same entitlement that is really at the heart of why rapists rape in the first place.

This ad is a joke about the "friend zone", a concept that existed prior to the Internet but has really taken off in an era where embittered men can gather in forums and complain endlessly about how women aren't giving them the sex they believe they deserve. Being "friend zoned" means that a woman you have been trying to seduce lets you down gently by suggesting that you should just be friends. In other cases, it's when a man lingers around a woman, leading her to believe he's a platonic friend, but he's just hoping that if he does enough favors for her, she'll eventually cave and offer guilt sex in return.

This dynamic was hilariously captured in a skit from Inside Amy Schumer:

On its surface, the "friend zone" seems like a silly joke, little more than a way to express disappointment at not getting what you want. And plenty of times, it is used that way.

But most of the time, the term "friend zone" is actually used not to express disappointment, but anger. You put your time in with this woman! You pretended to like her! She owes you. Many believers in the "friend zone" assert that it's impossible for men to genuinely desire the friendship of women, and so any woman who has a male friend is fooling herself if she thinks he likes her for something other than her body.

In other words, the entire concept is misogynist to its core, built on the idea that sex is transactional, something women give to men in exchange for affection or friendship, as opposed to a mutual activity borne from mutual desire. It's a consumerist view of sexuality, where women are items to be "bought" with favors and attention: You perform five door-openings, listen to her talk about her interests three times, buy her a drink, and you have built up enough chips to cash in for one blow job. Believers in the "friend zone" have very little regard not just for the idea that women make perfectly lovely friends, but have no respect for women's desires at all, seeing it as "unfair" if a woman has sex with who she wants instead of who has "earned" access to her vagina through doing her favors.

Unsurprisingly, communities of men have grown up, largely online, around the idea that they are being cheated because they aren't getting the sex they believe they deserve. And a major theme of these communities is getting revenge on women for failing to perform to expectations. For instance, a popular forum at Reddit, called the Red Pill, is based around the assumption that women are all evil bitches and therefore men are entitled, even obligated to exploit them, belittle them and emotionally abuse them. If anyone protests, Red Pillers cite their supposed victimhood: Because women won't give up the sex men are entitled to, then all this ugly behavior is excused.

And that is why that ad is so chilling. It tells a little story: He wants her. She told him she's rather be just friends. Rather than moving on to a woman who does want him back, he lingers around this one, hoping she'll change her mind. She doesn't. He gets bitter. And one night, while she innocently thinks her "friend" is going to a party with her, he instead is plotting his revenge.

The ad is premised on the idea that a woman who doesn't give you sex is somehow taking something from you. And, it's implied, if persuasion doesn't work, then force is a legitimate option.

This ad illustrations how the logic of male entitlement has violence baked right into it. Red Pillers, for instance, argue that emotional abuse (which they call the "dread game," where you deliberately try to make women insecure in hopes that they will try to gain your esteem through sex) is a legitimate way to extract sex out of unwilling women.

As most domestic violence experts point out, however, once a man starts emotionally abusing a woman to get her to submit to his will, it often turns into just cutting to the chase and hitting her instead. Once you have embraced the idea that you're allowed to hurt women because they don't give you what you "deserve," it's hard to keep a lid on how far you'll go.

That was demonstrated most horrifically in the case of Elliot Rodger, who spent a lot of his time on forums where men tell each other that women are failing to give them what they believe they deserve. After convincing himself that his sexless life was the result of women cruelly denying him his birthright, Rodger shot up the town of Isla Vista, California, to get his revenge.

The good news is that, while there's a lot of men online stoking each other's sense of entitlement---and getting even more traction for their beliefs from ads like this Bloomingdale's one---there's also a vibrant feminist community that is pushing back, and pushing the idea that sex and relationships should be about mutual attraction, not about men paying their dues and women reluctantly putting out (or getting forced if they fail to pay what they "owe"). This pushback is best epitomized by this popular meme that turns the "Red Pill" logic on its head: The concept of the "friend zone" is clearly bad for women, as it denies their right to autonomy and suggest that they are somehow failing if they date who they want instead of who called dibs first. But it's also bad for men. This transactional attitude towards sex clearly breeds bitterness and alienation. It also makes it hard to connect authentically with women who might like you back for real, if you're always trying to game them. It's also hard to imagine sex is that satisfying if you always see it as something a woman is giving up under pressure, instead of an expression of mutual desire. So let's hope future companies learn from the Bloomingdale's example, and stop pandering to bitter men who are forever whining about the "friend zone."