GOP presidential candidates fear-monger about the Middle East and Islam, yet know nothing about either

The Republican candidates simply make stuff up when it comes to the Middle East, peddling fear instead of facts 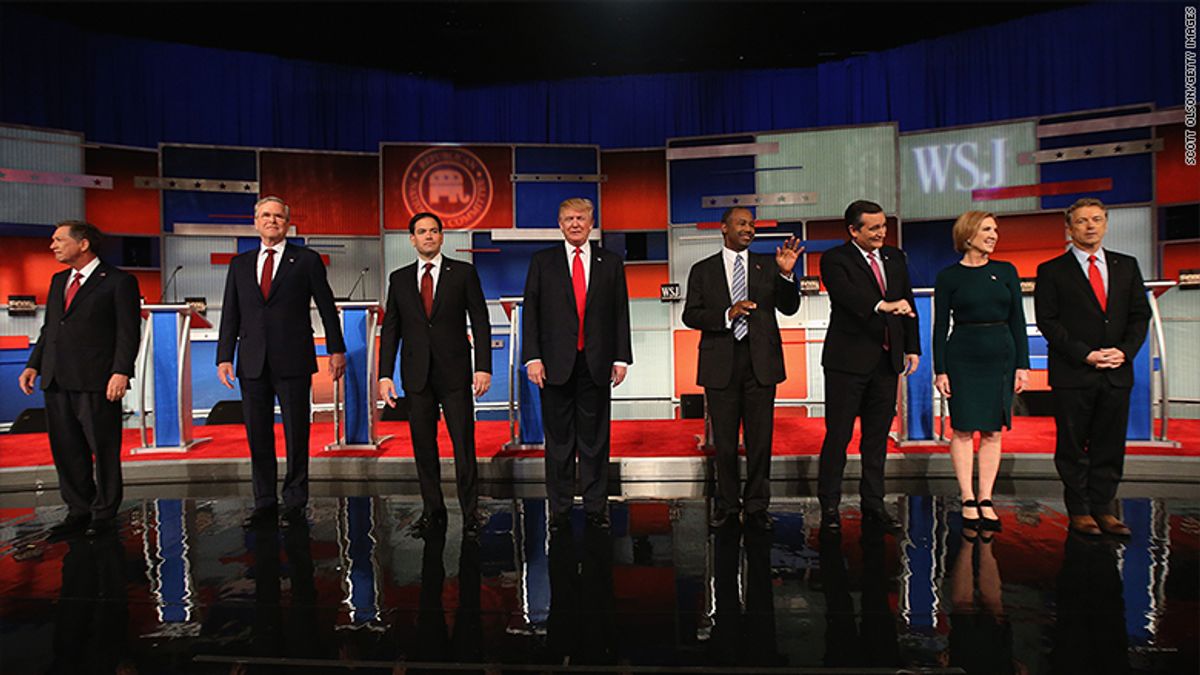 The Republican presidential candidates know virtually nothing about Islam or the Middle East, yet all they do is fearmonger about both.

Nowhere was this more evident than in the fourth GOP presidential debate, on Nov. 10. Islam was the bogeyman of the night.

Jeb Bush insisted that "Islamic terrorism" is "the biggest threat facing America today." Marco Rubio warned listeners "We can't even have an economy if we're not safe. There are radical jihadists in the Middle East beheading people and crucifying Christians. A radical Shia cleric in Iran trying to get a nuclear weapon." Ben Carson maintained we are fighting "global jihadists, and their desire is to destroy us and to destroy our way of life."

The cornerstone of the GOP's foreign policy is fear. And, although this fear may attract voters, it is based on blatant lies.

The most egregious of such lies came from Bush, who declared "If you're a Christian, increasingly in Lebanon, ... you're going to be beheaded." 41 percent of people in Lebanon are Christian. Where are the beheadings? When? Lebanon has problems with sectarianism, but not the violent extremist kind. In fact, it is a relatively democratic society, run on a unique system called confessionalism, that ensures proportional political representation from the country's various religious groups.

The lies spread about ISIS were legion. ISIS is the perfect objet d'horreur -- it is brutal and bloodthirsty, medieval and mysterious, an embodiment of orientalist tropes, a self-fulfilling prophecy brought about by the horrors of violent U.S. militarism. More importantly, Americans know virtually nothing about ISIS, so its threat can be exaggerated, inflated many times over, in order to coerce the public into supporting even more militaristic policies.

This claim is thrown around a lot, albeit with virtually no evidence. If you listened to the snake oil salesmen on stage, you'd think droves of Americans were fleeing the country and flooding Syria and Iraq to join ISIS. Yet how many Americans have actually joined ISIS?

Earlier this year, estimates varied between just 100 and 150 Americans. At most. And this is probably higher than the actual figure, for, when you look into isolated cases of Americans supposedly joining or aiding ISIS, you will see that U.S. entrapment is frequently involved. "Why does the FBI have to manufacture its own plots if terrorism and ISIS are such grave threats?" asks Pulitzer Prize-winning journalist Glenn Greenwald.

Yet name-dropping ISIS turns listeners' brains off and allows the presidential candidates to spew the most ludicrous nonsense about the Middle East.

"In order to make them look like losers, we have to destroy their caliphate," Carson said. "And you look for the easiest place to do that? It would be in Iraq." In his statements, Carson seemed to imply that all militant Salafi (that is to say Sunni extremist) groups are somehow linked. The reality is much more complex: al-Qaeda is a sworn enemy of ISIS, and violent sectarianism exists between different Salafi groups.

Trump continued dabbling with the dubious, stating as fact that ISIS "blew up a Russian airplane." Although this is speculated, it has not been proven, and is far from conclusive. (Trump also claimed "I got to know [Putin] very well because we were both on 60 Minutes; we were stablemates." While it is true that both Trump and Putin were on the same episode of 60 Minutes, they were on separately.)

According to the GOP, ISIS represents an existential threat to the very fabric of our existence. Carson insisted we must "destroy them before they destroy us." Rubio claimed that "They are coming to us."

The idea that ISIS poses any kind of significant threat to the U.S. is hardly based on fact. ISIS is a horrific fascistic group, but its danger has been greatly exaggerated. The people who should really be afraid of ISIS are those living in Iraq and Syria; this is one of the reasons millions of refugees have fled these countries, seeking asylum elsewhere.

How large ISIS is exactly is unknown. Estimates vary wildly, but it probably has just 40,000 - 50,000 members. The U.S. media may often fearmonger about it (fear sells), but the truth is Americans are not threatened by ISIS. The much bigger threat they should be concerned about is right-wing terrorism, which is on the rise, no thanks to the increasingly far-right Republican Party.

Equally questionable claims were made about other Middle Eastern countries. On overall Middle East policy, the presidential candidates again exposed their ignorance -- and hypocrisy.

Kasich insisted that Saudi Arabia is "fundamentally our friend," yet pointed out that the theocratic absolute monarchy sponsors "radical clerics" who "preach against us." What Kasich failed to mention is that the Saudi regime also proselytizes around the world, using its enormous oil wealth to spread its specific strain of Islamic extremism, Wahhabism -- a strain that happens to be similar to that preached by militant extremist groups like al-Qaeda.

U.S. diplomatic cables released by WikiLeaks show how Saudi businessmen and members of the Saudi royal family are the "chief funders of al-Qaeda" and other Salafi groups. Yet Kasich affirms that they are "our friends."

Kasich also said Egypt has "been our ally and a moderating force in the Middle East throughout [its] history." Egypt is under the iron fist of Abdel Fattah el-Sisi right now, a draconian dictator who violently overthrew the democratically elected government and massacred more than 800 peaceful protesters at Raba'a Square in just one day in 2013.

Sisi's regime shoots protesters in the streets and arrests journalists who speak out. An estimated 40,000 political prisoners languish in Egyptian prisons. But Egypt is technically secular, so therefore it's a "moderating force."

In Jordan, Kasich likewise asserted "we want the king to reign for 1,000 years." So much for wanting democracy in the Middle East.

The mendacity continued. While warning about Russia, Bush claimed "It is tragic that you see Iraq and other countries now talking to Russia. It wasn't that long ago that Russia had no influence in the region at all." In the real world outside of Bush's imagination, Russia has long had influence in the Middle East, especially when it was part of the Soviet Union. During the decades of the Cold War, many Middle Eastern countries, including Syria, Iran, Iraq, Egypt, Libya, and even Israel worked with the former USSR. Even after the collapse of the Soviet Union, Russia maintained a relationship with numerous Middle Eastern nations. How long ago is "long ago"? Over a century ago, in Czarist Russia?

Fiorina, too, joined the club in making her own demonstrably false claims. She lamented that the U.S. is not giving weapons to Jordan; this is false. She argued the U.S. has not armed the Kurds; it may not be giving as many as some would like, but this is again false.

In one of the more outlandish moments, Trump wrote off the Joint Comprehensive Plan of Action (JCPOA), known colloquially as the Iran nuclear deal, as "one of the worst deals ever made -- one of the worst contracts ever signed, ever, in anything, and it's a disgrace." Such a position exposes just how extreme U.S. politicians are vis-à-vis the international community.

The JCPOA is an global deal that took years to come into fruition, and was deliberated by the world's most powerful countries, including not just the U.S. and Iran, but also the U.K., France, China, Russia, and Germany, along with the European Union. It is supported by the vast majority of the planet, and widely seen as a balanced, moderate deal -- that, if anything, is harsher on the Iranians than it is on the other parties.

Rubio continued with the distortions. He claimed that "we have a president that treats the prime minister of Israel with less respect than what he gives the ayatollah in Iran." Just one day before the debate, however, Obama met with Israeli Prime Minister Netanyahu in the White House.

The GOP presidential candidates present the Middle East (excluding Israel) as a mostly unvariegated blob of violence and extremism, and, in doing so, expose just how little they know about it. They lie about the big things and the small things alike. And they depend on such lies to garner them votes, peddling fear instead of facts.