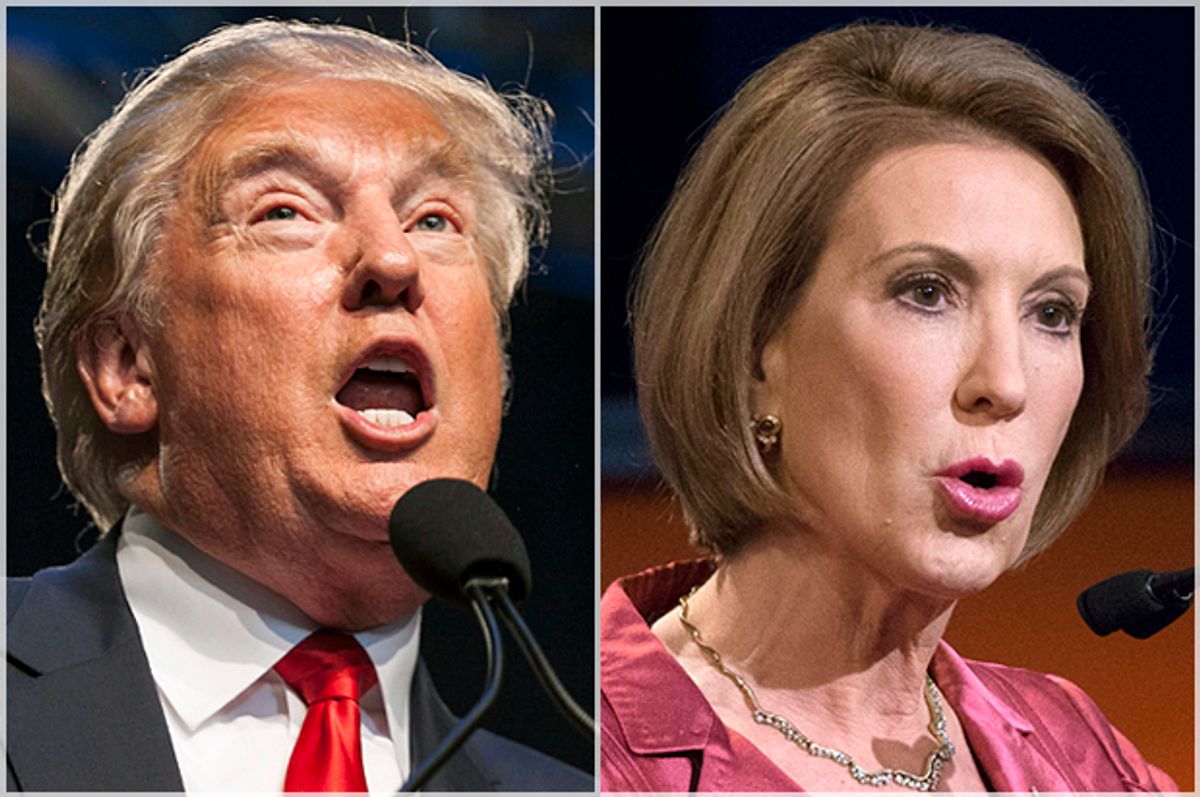 The cold, joyless afterglow of a Republican presidential debate is typically when reporters and fact-checkers sift through what the candidates said on stage and discover – to great shock and consternation – that pretty much everything they said was wrong. This is a symptom of the post-truth era of GOP politics in which candidates’ positions are untethered to observable reality, and they feel confident that debate moderators won’t challenge them. If they do get challenged, they’ll just restate their position over and over until people just give up and stop bothering to correct them.

This week’s Fox Business debate fit neatly within that framework. Just pick a subject area and you’ll discover that pretty much every candidate said something either wildly misleading or inarguably false. On financial regulation, Jeb Bush was completely backwards on what Dodd-Frank does and Carly Fiorina wrongly blamed the subprime mortgage crisis on the federal government. On climate change, Rand Paul tried to pin the decades-long decline of Kentucky coal on Barack Obama’s environmental regulations. Donald Trump warned about China taking advantage of the Trans-Pacific Partnership (China is not part of the TPP). Ben Carson said that every time the minimum wage goes up, people lose jobs (nowhere close to being true). They should know better – and most of them likely do – but they don’t care.

What struck me, however, was how the candidates spoke about the Affordable Care Act. Put simply, nearly everything they said about it was completely wrong.

Let’s start with Carly Fiorina, who’s proven herself a devoted practitioner of post-truth politics over the last few months. Asked what she would do to “alleviate pressure on small business,” Fiorina said her first priority would be eliminating the ACA. “Obamacare has to be repealed because it’s failing,” she said to enthusiastic applause from the audience. “It is failing the very people it was intended to help but also it is crony capitalism at its worse.” That’s demonstrably untrue – since the ACA was implemented the uninsured rate has plummeted and people who’ve gained coverage are better able to cover the costs of medical care. But, in spite of the reams of data showing that Obamacare is actually helping lots and lots of people, Fiorina declared “Obamacare is not helping anyone.”

Then there’s Donald Trump, who roped Obamacare into his tirade against the Trans-Pacific Partnership. “It’s 5,600 pages long. So complex that nobody’s read it,” Trump said. “Like Obamacare. Nobody ever read it. They passed it, nobody read it. And look at mess we have right now, and it will be repealed.” This is an expression of the longstanding conservative freak-out over a snipped-from-context Nancy Pelosi comment from 2010. The idea Trump’s trying to get across is that the people who wrote and passed the Affordable Care Act don’t understand how it works, which is nonsense, but very satisfying to conservative voters who live and breathe Obamacare hatred.

Moving on, Ted Cruz attacked Hillary Clinton as an avatar of Washington “cronyism,” and as an example of that cronyism he offered the ACA:

CRUZ: I’ll give you an example of that, which is the congressional exemption from Obamacare, which is fundamentally wrong, and I’ll tell you this, if I’m elected president, I will veto any statute that exempts members of Congress.

Right here you have a pure expression of post-truth politics. There is no “exemption” for Congress in Obamacare. There never has been. It’s a silly myth that’s been circulating since the ACA was in its gestational period. The reality is that members of Congress and their staffers have additional obligations under the ACA, thanks to a provision inserted into the law by Sen. Chuck Grassley, Republican of Iowa. But Cruz got a round of applause from the audience – and stone-faced silence from the moderators – for repeating a lie that’s been debunked for five years running.

The lying even extended down into the undercard debate. New Jersey’s Chris Christie, newly bounced from the main stage due to abysmal national polling numbers, reluctantly got into a spat with Louisiana’s Bobby Jindal over which of them was the better governor (spoiler: they’re both widely loathed in their states). In defending his record against Jindal’s onslaught, Christie said “we stopped Obamacare in New Jersey because we refused to participate in the federal exchange.” As National Review’s Ramesh Ponnuru pointed out, that statement makes no sense – even if you allow that Christie misspoke and meant to say that New Jersey refused to set up its own state-based Obamacare exchange, he still didn’t “stop Obamacare” because the state just defaulted to the federal exchange. And, of course, Christie happily accepted Obamacare’s Medicaid expansion funds. Despite what Christie insists, Obamacare is very much happening within New Jersey’s borders (and the state’s uninsured rate is dropping as a result).

But Christie and the rest of the candidates have come to understand that relentless, inveterate lying carries less risk than honestly grappling with the facts as they exist. They know that horror stories about Obamacare and the economy are what Republican voters want to hear, and they know debate moderators aren’t likely to call them out. And even if they do get called out, they can just retreat behind the “liberal bias” shield and trust that the conservative media will rally to their defense. Lying works, so they see no reason not to.