Too often, female producers and songwriters are seen as outliers rather than legitimate artists 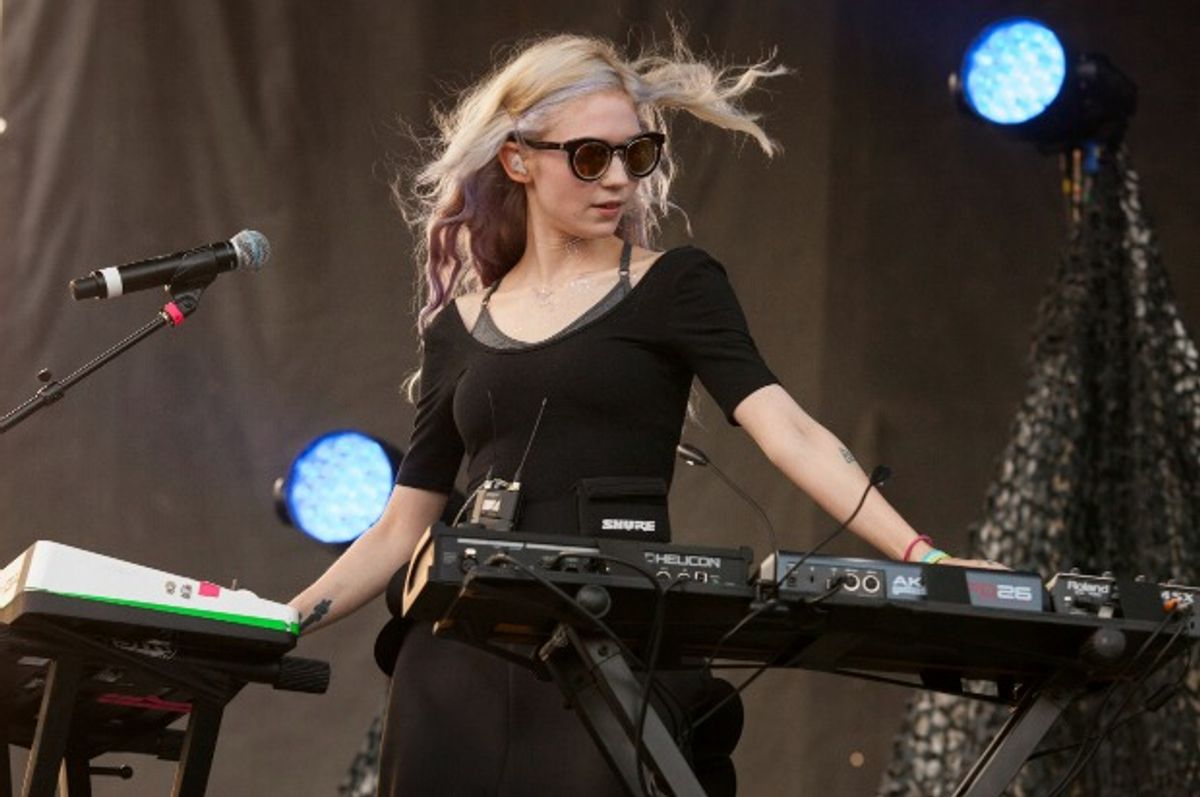 Last week, the Canadian artist Claire Boucher (aka Grimes) released her first new album in three years, "Art Angels." The wait was worth it: The 14-song collection is a meticulous blend of genres and approaches, from classical-influenced electropop (“Flesh Without Blood”) and synthpunk (standout “Kill V. Maim”) to dreamy, chart-ready pop (“Artangels”) and ’90s R&B (“Butterfly”). "Art Angels" assimilates these diverse influences so seamlessly, it’s tough to pigeonhole the album; if anything, Boucher uses familiar sounds and inspirations as a springboard to mix-and-match sounds with impunity.

Lyrically, the record is just as eclectic and wide-ranging—“more happy and angry” as she told The Fader recently—and features songs from the point of view of different characters: “There’s Screechy Bat, who’s the metal one. There’s one that’s super vampish and sexy now — I don’t know her name yet, but she’s like the Ginger Spice.” Accordingly, "Art Angels" holds nothing back. “California” seemingly alludes to people who want to reduce her to a stereotype (“When you get bored of me, I’ll be back on the shelf,” “You only like me when you think I’m looking sad”), while the hip-hop-tinged, pogo-electro highlight “Venus Fly,” Grimes repeatedly asking pointedly, “Oh, why you looking at me? Oh, why you looking at me against them?”

Boucher has always addressed musical and societal intricacies—and people’s inability to reconcile such complexities—in interviews and on Tumblr, especially a 2013 post in which she touches on frustrations she’s faced being a public figure. Among other things, she mentions the sexism she’s encountered as a musician: “I’m tired of men who aren’t professional or even accomplished musicians continually offering to ‘help me out’ (without being asked), as if i did this by accident and i’m gonna flounder without them. or as if the fact that I’m a woman makes me incapable of using technology. I have never seen this kind of thing happen to any of my male peers.”

Boucher’s disgust is understandable, as she learned how to play violin and ukulele for "Art Angels," produced and engineered the album herself, and even created the artwork. It’s a DIY effort that should be cheered and championed, not seen as an anomaly. But Boucher isn’t alone in having her creative output undermined. In a recent Salon interview, Natalie Merchant discussed stepping out on her own to record “Tigerlily,” and how “excited” she was to be making an album “without being bossed around by anyone. …There were definitely decisions made in the recording process with producers in the past that I’d felt like I’d been kind of bullied. I was oversensitive, probably, and that’s just the way I felt. But I thought – whether I sink or swim, succeed or fail, I want to be making decisions.” And in a Pitchfork interview from earlier this year, Bjork described several instances in which her production work was deemphasized, in favor of the contributions from a male co-producer.

To hear these sentiments coming from Merchant and Bjork—both of whom have been professional musicians since they were teenagers—was sobering. Sadly, it wasn’t surprising: Musicians considered to be along the “kooky female” continuum often have trouble being taken seriously as anything but a wacky novelty. Just ask Tori Amos, who’s been fighting off that pernicious label since she broke out as a solo artist, or the perennially minimized harpist Joanna Newsom. Or consider Lady Gaga, whose creative fashion sense often sees her reduced to a caricature, and Solange Knowles, whose music and style have been described as such. Or even take Babymetal, the all-girl Japanese metal group that’s often been treated with a mix of curiosity and condescension—and branded with a hefty dose of the “kooky” adjective. This isn’t limited to music, either: Through the years, actresses from Geena Davis and Swoosie Kurtz to Zooey Deschanel and Helena Bonham Carter have all been called kooky for one reason or another—as if cultivating a look or career approach that’s even the slightest bit unorthodox is strange.

Women and girls who don’t conform to society’s ideal of what they “should” be—whether it’s the “cool girl” or its various offshoots, or some other invisible, impossible-to-live-up-to metric—are shoved into the “weird” box instead. Often, this tag comes with the added baggage of having their art devalued (as Grimes has discovered) or seen as strictly niche (see: Joanna Newsom). Either way, the “kooky” descriptor diminishes the boundary-breaking nature of an artist’s music, and instead emphasizes outward appearances. In some cases, musicians become known for perceived behavior instead of what they actually have to say, thereby relegating more interesting (or important) nuances to the background. They’re reduced to a digestible trope or a one-dimensional character.

In other cases, being outspoken places impossible (and unfair) expectations on artists and what they choose to discuss, as if deviating from the “kooky” script is verboten. In a recent Noisey interview, Boucher says, “Everyone is always like, ‘How do you feel about feminism? How do you feel about feminism?’ and it’s like maybe I don’t wanna fucking talk about feminism, maybe I just wanna be a female producer, because it’s like even being a female producer is so rare it drives people fucking crazy. It’s like my sheer existence is like a political act, I think, to a lot of people. It’s not to me.” During that same interview, she expressed similar annoyance with “being gendered” by being tagged with the label of female producer: “It’s like, maybe the reason there aren’t so many other people besides men feeling like they can produce is because people act like it’s a fucking bomb that’s exploding.”

As Boucher so acutely observes, women being asked (or simply talking) about their experiences in music is frequently fraught with ignorance. Asking women in the music industry to talk about the experience of being a female whatever—DJ, musician, producer, writer, executive, etc.—is demeaning; after all, nobody would ever ask a man, “What’s it like being a male guitarist?” Assuming that just because she’s a woman with opinions about feminism means she’s up for talking about feminism 24-7, in every interview, is equally misguided—if not insulting, especially if it’s an artist, like Grimes, who has a new record she’s excited to discuss.

Yet it’s also problematic that people still find it strange that Boucher’s a producer. It’s representative of the bias and misogyny that still permeates the music industry, which critic Jessica Hopper underscored over the summer, when her Twitter feed became a place for women and other marginalized groups to describe their brushes with oppression. Sexism is clearly a systematic, ingrained problem, one that needs to be rectified. Figuring out how best to talk about this is the challenge, however: How can we discuss and address the unique experiences women have had in music —whether negative or positive—while not treating the group like they’re mystical unicorns? Certainly approaching interviews and criticism from a music-first perspective helps. But there also needs to be a profound shift in how female musicians like Boucher are treated and viewed: as complex human beings with malleable and valid moods, preferences and artistic interests, not quirky lucky charms.