Kentucky senator seemed adrift before Tuesday's debate, but he seems to have found his cause, and it's a good one 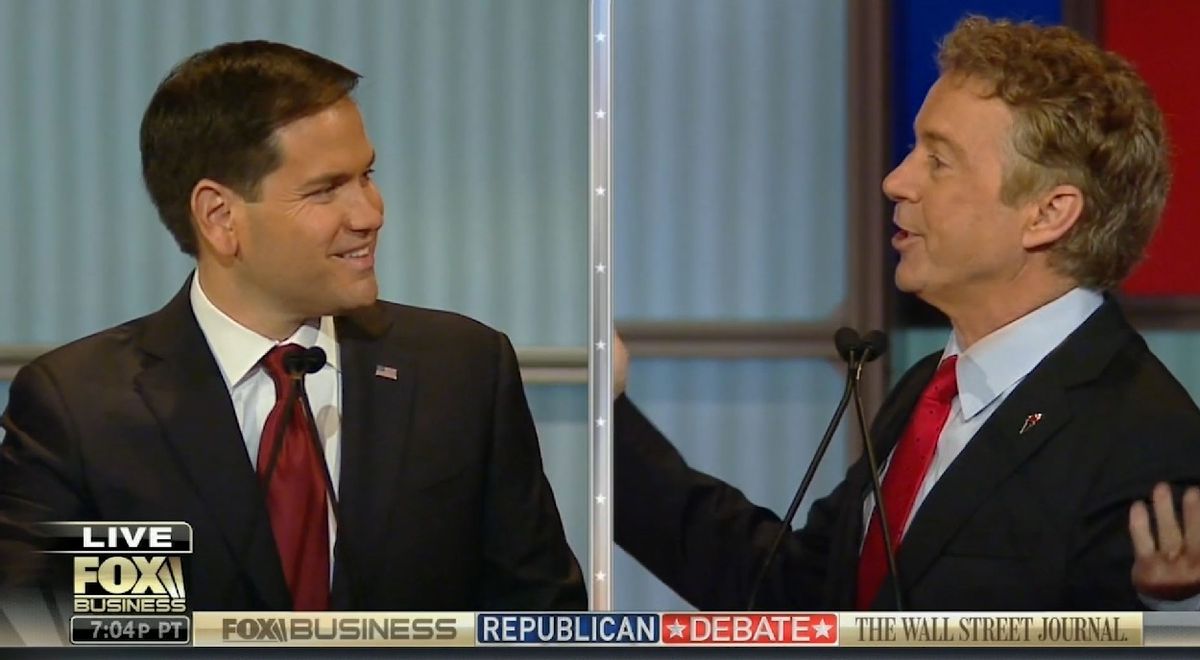 Fox Business's Tuesday night Republican debate was equal parts thuddingly dull and thoroughly truth-averse, save for one interesting moment when Rand Paul took a moment to troll Marco Rubio about defense spending, and not just because Paul managed to unnerve the usually slick as a snail Rubio. Admitting that we spend a lot of money and that's not very "fiscally conservative" is a third rail in Republican politics and yet there Paul was, looking alive, hollering, "We need a safe country, but did you know, we spend more on our military than the next ten countries combined. I want a strong national defense, but I don’t want us to be bankrupt."

It wasn't like he declared himself an atheist or anything, but in a debate format geared towards maximum tedium, it was pretty entertaining. Indeed, for people who don't live in the conservative bubble, it helped make Rand Paul seem like the sanest person on the stage last night, though that's like a 2-year-old beating a bunch of newborns in a foot race. But the audience wasn't really  having it. Paul got a smattering of applause, but it's not clear if it's because anyone agreed with him or that they just liked that someone was bothering to entertain them for a moment.

At this point, the only reasonable cause Paul has to run for president is that he hates Republicans and enjoys exposing, every chance he gets, how they are a bunch of lying hypocrites with this entire "small government" talking point. It can't be that he wants to win, since trolling people about their delusions is not known as a way to win friends.

To hear conservatives talk, this principle of "small government" is sacred, inviolable and the supposed Democratic opposition to it stems no doubt from their ideological commitment to evil. Why we are supposed to love "small government" is rarely explained. Like daylight savings time or that rule about not taking the Lord's name in vain, it just is, and not for we mere mortals to question.

If you do start to question it, it becomes immediately apparent that finding a Republican who legitimately wants to shrink the size of the government, on principle, is harder than finding a Republican who has warm things to say about Planned Parenthood. On the contrary, one strong consistent trend over the past century is that Republican presidential administrations contribute more to the federal debt than Democratic ones. Even though almost no one knows it, deficit spending under President Obama has been consistently dropping, now shrunk by a $1 trillion compared to what the federal government had to spend to recover from the Bush recession. Principled adherence to "small government" would simply not lead to voting Republican, if only out of fear that all that war-mongering rhetoric would lead to more expensive adventure wars like the previous President Bush gave us.

And, as Paul compulsively points out, this is partially because Republicans love the military. Watching Tuesday's debate, you would get the strong impression that cutting even one dollar of military spending is the equivalent of sending a cruise ship full of free weapons to ISIS and bringing them over to the United States to be let loose in Miami. When you actually start to prod conservatives, you will quickly discover that "small government" isn't a principle at all, and doesn't even touch the truly sacred principles like profligate defense spending.

That's because "small government" is and always will be a cover story for the real principle at stake, which is halting government activities aimed at ameliorating injustice and inequality. If you listen carefully to any Republican who is not Rand Paul, you'll see that the concept of "big government" only encompasses two ideas: Regulations on business that protect workers or the environment and social spending.

To be clear, even the category of "social spending" that qualifies as "big government" is exceedingly limited. Anything spent on middle class or wealthy people is not "big government," but if the money goes to help lower income people---especially if they are perceived as disproportionately people of color---then all hell breaks loose. In practice, this means that Republican voters don't treat Medicare and Social Security or other social safety net programs for the middle class as "big government". In numbers, that means that only about 10% of federal welfare spending is considered "big government" by your average Republican politician.

Consider: The term "big government" doesn't cover Social Security, which is a quarter of the federal budget. But it is used frequently to slur "Obamaphones"---a program that provides low cost cell phones to low income people---which costs our federal government $0, because it's paid for directly by telecom companies and not through federal taxes.

And, of course, "big government" is rarely, if ever, used by conservatives to slur unnecessary regulations passed on abortion clinics for the sole purpose of reducing abortion access, or to raise the alarm about police overreach, such as "stop and frisk".

None of this is new or particularly hard to figure out. Which is why it remains such a mystery that Rand Paul is running for president. Surely he must know that "small government" is a code term for "squash the little guy" and not an actual declaration of principles about government spending and overreach. You can't spend more than five minutes around Republicans without seeing that quite clearly. Nor does he really articulate why you should want a literal small government if it's not to advance the "squash the little guy" principle. There is no converting people to his point of view, since "small government" doesn't appeal as a principle without this overarching need to reassert unjust power systems. Hell, even Paul doesn't really believe his own nonsense, since Mr. Small Government still wants to use government power to force unwilling women to give birth.

The only explanation that makes sense is that Paul's a troll and that his campaign is a very expensive way to get some lulz at the expense of other Republicans. In an election cycle featuring Donald Trump, it's not even the oddest motivation there is to run for president.