Matt Berninger has always been funny: "I actually think The National's stuff has more humor than people pay attention to"

Salon talks to The National frontman about his new collaboration EL VY, "angsty dudes" records and his sly humor 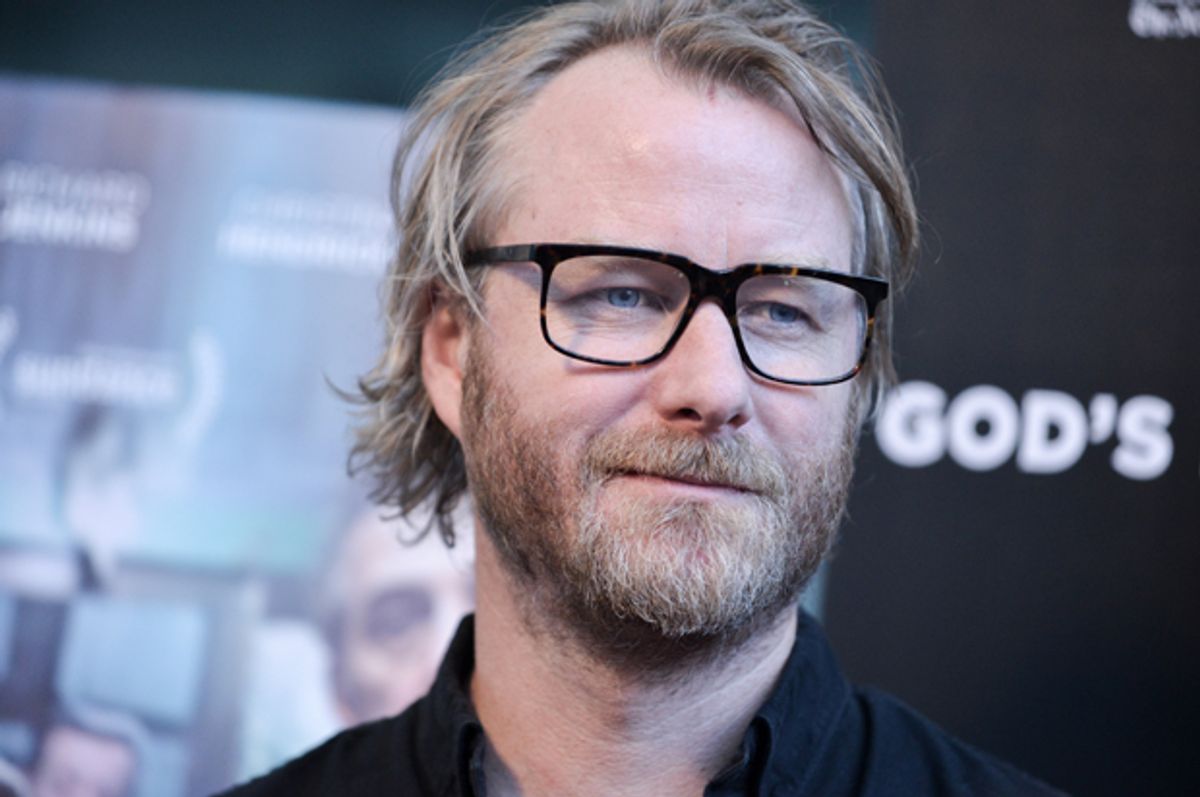 EL VY is the sort of project indie rock enthusiasts dream of happening. Matt Berninger, the tearjerking baritone singer and lyricist from The National, teamed up with Brent Knopf, the mastermind behind Ramona Falls and member of Menomena, to write "Return to the Moon." The album dropped the last week of October and the two are currently on tour in support of it.

It’s a record occasionally trafficking in brighter fare than Berninger’s main project. Though it’s unafraid of slipping into shadows, the overall tone is far less anxious. To put it in perspective, they’re covering “She Drives Me Crazy” by Fine Young Cannibals on tour and releasing videos of Berninger dancing around in public. This isn’t necessarily the sort of stuff you crack open a bottle of wine and cry to. Still, the lyrics he contributes to EL VY succeed for the same reason they do in The National: they’re relatable, self-aware and humanist. For that matter, they’re funny, too — just in a more obvious and goofy way than his contributions to his main band have been.

I talked to Berninger about whose music he finds compelling, whose jokes he finds funny and who he ends up being under the stresses and joys of criticism, creation and collaboration. "Return to the Moon" may be getting pigeonholed as his “funny” album, but he was still way more upbeat, eager to joke and ready to laugh than anyone quick to caricature sad singer-songwriters would suspect.

One thing I really enjoyed about "Return to the Moon" and [The National's] "Trouble Will Find Me" before this is how you've been referencing bands you're into within the music itself. You've got Beatles and Minutemen references alike through the new one and those are obviously pretty different bands. Is there a throughline you can see through all your favorite music regardless of genre? Characteristics you're into regardless of how they're executed musically?

Like, is there a common thread in my record collection? It would probably be frustrated, angsty, melodramatic dudes mostly. (Laughs) I bet you'd see lots of depressed British guys in my record collection. I think the reason I have a lot of music references in our own music is that I'm always writing sort of about myself. Sometimes I put it through characters and I use stories that aren't so specifically autobiographical. A lot of it is. But I think music is such a part of my identity. I think people use music or sports teams or whatever to define their tribe. I don't know how old I was when I discovered The Smiths but I knew The Smiths were for me as opposed to, say, Van Halen. The truth is Van Halen is probably a bunch of depressed dudes too who are similar to Morrissey in a lot of ways. So no disrespect to them. (Laughs) But The Smiths were for me. That kind of thing was me. It's an identity thing and that's why it comes into the songs a lot.

In other interviews you've done about EL VY, it seems to keep coming up that this project features more autobiographical material.

Well, the EL VY stuff has more details about Cincinnati and whatnot. I wouldn't necessarily say it's more personal than the other stuff I've done. I can't write a song unless I feel personally connected to it. So it's not like I'm divulging or exposing myself in this EL VY record more than I do with The National. I'm an oversharer in all regards; I'll write about whatever. I'm not very guarded. EL VY just has more details about Cincinnati or whatever so that's what that means.

People also seem to really be highlighting the dark humor of this new record. Who are some of the people you find funniest?

For musicians, I think Nick Cave is hysterical and Tom Waits, too. Leonard Cohen has a whole song about his boner. The dark humor is just a way to exorcise some of your demons by writing absurd, borderline lyrics. "I'm the Man to Be" is the main one like that on this record, with the autoerotic asphyxiation in it. (Laughs) I don't know, I was just making fun of myself. It wasn't really a plan to try to be funny. I was just writing along to the music and it ended up going that way. I actually think The National's stuff has more humor than people pay attention to. I don't care, I'm not trying to set the record straight or anything. This record just went in a goofier direction.

The record starts out brighter than it ends. It ends really melodramatically and melancholy. It's a little bit of a bait and switch with the beginning of this record, considering where it ends up going. None of that was an idea or an approach. It just was the best sequence for it. The songs and the music itself defined this as what it would end up being. Brent and I didn't have many conversations at all about what kind of record to make. It always happened kind of organically.

What's it like being at the other end of the music journalism machine, where people are constantly trying to extrapolate what you're trying to do or accomplish? Does that have any bearing on your psyche?

I think good music journalism is one of the hardest things to do. It's really hard to write about music so I'm impressed by anybody who does it well. You can't just describe an album and give it a number. You have to have a perspective or point of view. Good music journalism goes beyond just rating a sequence of songs. It tries to talk about the record in a context and it's hard to do well.

People talking about this record in the context of things Brent and I have done before in other bands is something they should do and it makes total sense. I read all the reviews. The bad ones I read once and don't look at again and the good ones I read 10 times. (Laughs)

You guys had a file of about 450 songs and ideas, right? How do you even begin to vet that big of a number down to what you ended up with?

Brent just writes and writes and he had all these ideas. He's a very meticulous organizer. When I asked him if he had any leftover stuff, he had a folder where he said that's everything he had that he hadn't used yet. He said, "How much do you want? I have a lot." I said, "Just send me everything." I didn't realize how much there was going to be, but it was kind of easy.

I made a 12-hour playlist and I'd just listen to it. If there was something on that 12-hour playlist I found myself connecting to on whatever level, I'd pull that file and throw it into another folder. It got filtered down to about 20 or 30 things very quickly. Out of those 20 or 30 things, we'd tinker around with those and send them back and forth, but half didn't even make it on the record. Then there's four or five songs on there we wrote in the last two or three months before we mastered it. Some of it started a long time ago and other parts came about pretty immediately toward the end. "I'm the Man to Be" was the last thing that came together; it kind of came out of nowhere.

I assume part of the reason you did this project was because you liked Brent's music a lot. Are there any other contemporary groups you're enamored with right now? Not necessarily to collaborate with but just more modern stuff that's been resonating with you?

I love The War on Drugs. I don't think I'm gonna do any more new collaborations. Maybe I will. I'm a big Menomena fan and a big Ramona Falls fan but the biggest reason this record happened is because Brent's a pal. I like the guy. If Brent and I were building a boat together, I'd have a blast building a boat with him. But I don't know how to build a boat so we made a record together. (Laughs) That's kind of how it happened.

Does most of your collaborative work go smoothly? Are there times you decide there's a cross you need to die on?

With both The National and this thing, I think I've changed a lot. I used to be a hard person to collaborate with. I don't think I'm an easy person to collaborate with now but I'm easier. There's this thing where you get really frustrated when you think the other person isn't hearing the same song you are. In the first eight years of The National's collaboration, we'd fight a lot because we'd be so worried the other people weren't hearing what we were hearing. I think we all realized it doesn't matter if they're not. It's better than what you had in your mind anyway. Let it be a little bit out of your control, let it be a hybrid, let it have multiple dimensions and perspectives and, since it's a rock song, let it have conflicting things from what you've wanted it to do.

I've very much loosened my grip on the whole creative, collaborative process and I'm much more open to other people's ideas than I used to be and it's becoming so much more fun. I used to sweat and belabor and stress out and lie awake about songs. I still do but it doesn't cause me angst anymore. I've come to love the whole reckless process of making songs. Nobody's going to get hurt by a rock song, so you can do whatever you want with it. If you're feeling connected to it, you should just keep chasing it.