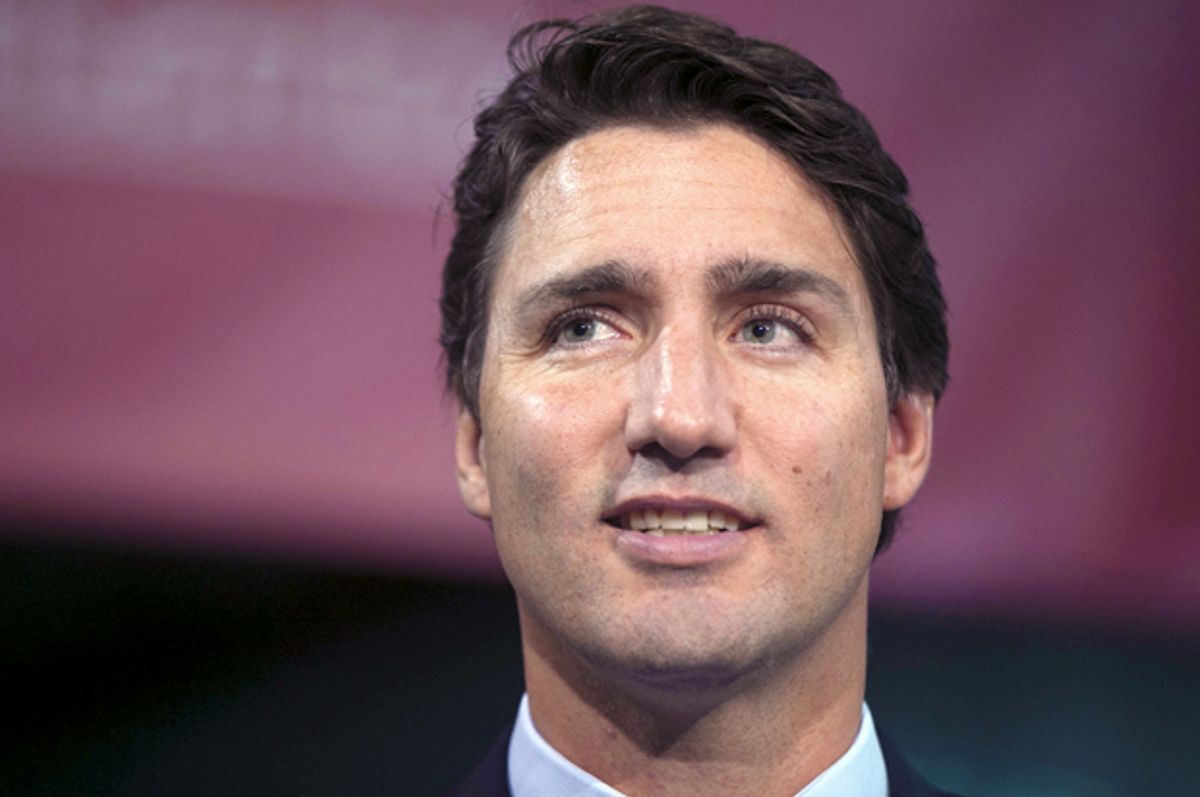 The newly-elected leader’s continues receiving praise for his first political move, because of how bold it is, even if it’s how government should always operate—with equal gender representation. When announcing the selection of his new cabinet, made up of 15 men and 15 women (a 50-50 split), one reporter asked Trudeau why he felt it was important to build his team with gender equity in mind. His short, sweet response urged everyone to get comfortable with a new reality: “Because, it’s 2015.”

More from The Daily Dot: "Parisians use a hashtag to offer safe places to stay in wake of terror attack"

Those three words took a life of their own on Twitter, where his quick, off-cuff response set off a number of inspired hashtags like #BecauseIts2015, affirming the need for governments to ensure that the people in power represent the population they’ve sworn to serve. The move was simple, but the impact was profound—and it sends a message to other countries, including the United States, about an easy way to address gender disparities in government, starting at the highest executive levels.

Although President Obama’s administration is arguably the most diverse in American history, men still make up the wide majority of his cabinet. According toWhiteHouse.gov, Obama’s current 23-member cabinet (including members out of the presidential succession line, but who have cabinet-level rank) includes 16 men but only 7 women, who are outnumbered by about a 2-to-1 ratio. In contrast,women comprise a slight majority of the U.S. population, representing somewhere close to 51 percent of Americans.

And in the prior administration, President George W. Bush’s cabinet looked even worse. Of the 21 cabinet and cabinet-level officials advising Bush on vital national interests, only five women—at most—served at the same time during his presidency. With an abysmal 4-to-1 ratio, women were even more outnumbered in the Executive Branch during the early 2000s. And as for Bill Clinton, during his time in office, he too only had (at most) five women working alongside each other—with men primarily running the show.

This is why Trudeau’s move in Canada is a step in the right direction: It’s not only the right thing to do, it’s also not that hard. If the United States really wanted to follow suit, it easily could. But for the past 16 years, and then some, it’s chosen not to.

There’s a reason for all the Internet’s excitement about Trudeau and his approach—so far—to being a world leader. Just because a politician enters the highest office in their land, it doesn’t mean they have to follow the established norms and practices of their predecessors, let alone replicate the institutional problems that make it hard to govern well. Even if previous administrations didn’t have gender equity in their cabinets or other appointed positions, change can happen when leaders accept their mandates from the people and approach their duties with a fearlessness that engenders good faith with the public.

Far too often, voting constituents head to the ballot box either with good faith that their preferred candidate will bring the sea change they’ve longed for—or they despair exercising their civic duty because it’s a vote for just another cog in the machine. Even worse, constituents can get easily disillusioned when the “reform” candidate takes office, only to become the politician they promised they wouldn’t be.

More from The Daily Dot: "Neil Gaiman reflects on 'Sandman' as he closes the loop on the beloved series"

But Trudeau, in the early days of his time as Prime Minister, seems to be building that trust, and making decisions that move closer to creating equity and justice for women in Canada. Given that many of his contemporaries still struggle to achieve gender equity at the executive levels of government, his cabinet could serve as a global model for what politics and lawmaking can look like when the people in power reflect the people they serve.

That’s why the Internet buzzes with excitement about Trudeau. Gender equity in his cabinet isn’t only good news for Canada—it’s a beacon of hope for the rest of the free world.