Modern Republicans can be relied on to invoke the memory of good ol' Ike. Just one problem: He would've hated them 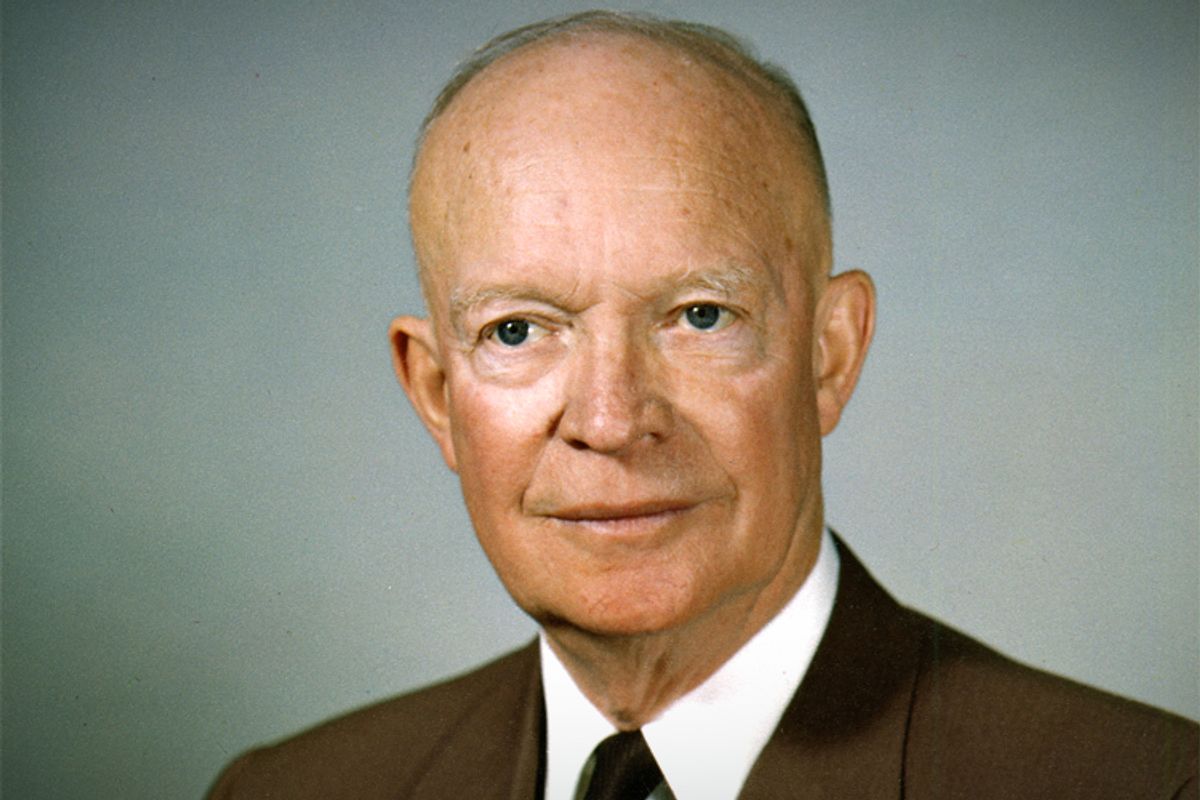 Donald Trump likes Ike. Or to be more specific, he likes one of Dwight Eisenhower’s most notorious policies as president, Operation Wetback, which deported somewhere around 250,000 to over 1 million Mexican immigrants in the early 1950s -- inhumanely, it should be added (in a particularly bad case, 88 braceros died of sunstroke). At the fourth GOP primary debate, Trump brought up the 1950s program, to try and show the American people that his plan to deport 11 million undocumented immigrants isn't really that big of a deal (of course, it is a big deal, and would probably cost more than a half trillion ​in taxpayer dollars and sink the economy in the process). While The Donald was mostly correct about the brutal program (although he exaggerated the number), he did forget to mention that the crackdown on illegal immigrants during this time was also accomplished by expanding visa and legal migration opportunities; indeed, in some cases, “unlawful migrants were driven down to the border and made to take one step across the border and come back in as a legal bracero worker, a process referred to as “a walk-around statute.”

It is just like a modern Republican to pick out one of the most detestable policies of the Eisenhower presidency to praise. When you look at the 34th president’s overall administration, it is true that Eisenhower was a good president — indeed, for a Republican, he was great president. Unlike the Republicans of today, he was moderate and reasonable, and not wholly owned by the wealthiest Americans. It was Eisenhower — the first Republican president after the New Deal — who refused to go after social programs that had been enacted, to the great dismay of the more conservative factions of his party. It was Eisenhower who said the following in a letter to his brother:

Should any political party attempt to abolish social security, unemployment insurance, and eliminate labor laws and farm programs, you would not hear of that party again in our political history. There is a tiny splinter group, of course, that believes you can do these things. Among them are H. L. Hunt (you possibly know his background), a few other Texas oil millionaires, and an occasional politician or business man from other areas. Their number is negligible and they are stupid.

Oh, how times have changed. The oil millionaires (billionaires, today), the corporations, the extremist factions -- they have won the battle over the GOP’s soul. The Republican party has abandoned the moderate Republicanism of Eisenhower for the ultra-conservatism of the John Birch Society. It was, after all, Robert Welch — the founder of the Birch Society — who called Eisenhower a “dedicated, conscious agent of the communist conspiracy,” because he did not fully embrace McCarthyism or aggressively go after unions and dismantle social welfare programs. Sen. Ted Cruz, R-Texas, has joked about President Obama — who is closer to Eisenhower politically than today’s Republicans — being a communist.

“Workers have a right to organize into unions and to bargain collectively with their employers,” said Eisenhower. “And a strong, free labor movement is an invigorating and necessary part of our industrial society.” When was the last time you heard a Republican calling a strong labor movement a necessary part of our society? This sounds like something Sen. Bernie Sanders, I-Vermont, would say. Today, union-busting is a source of pride for Republicans. Scott Walker even claimed that his war against workers and unions in Wisconsin had prepared him to fight the Islamic State.

Look at taxes, and the same picture appears. Today, Republican candidates are releasing absurd tax plans, one based on the Bible (Carson), one that would add over $10 trillion to the deficit (Trump) and one that would straight up abolish the IRS (Cruz). They are all waging an anti-tax jihad that benefits the wealthiest Americans and cares little about fiscal responsibility. When Ike was head of state, the top marginal income tax rate was 92 percent. Just imagine a Democrat proposing something like that today.

And of course, who can forget Eisenhower’s famous farewell address, where he coined the term “military industrial complex,” and warned about the growing influence of the defense industry — which profits off of war and fear — on our political system. Here is the important section of the address:

We have been compelled to create a permanent armaments industry of vast proportions. Added to this, three and a half million men and women are directly engaged in the defense establishment. We annually spend on military security alone more than the net income of all United States corporations... The total influence -- economic, political, even spiritual -- is felt in every city, every Statehouse, every office of the Federal government. We recognize the imperative need for this development. Yet, we must not fail to comprehend its grave implications... In the councils of government, we must guard against the acquisition of unwarranted influence, whether sought or unsought, by the military-industrial complex. The potential for the disastrous rise of misplaced power exists and will persist. We must never let the weight of this combination endanger our liberties or democratic processes.

Many disastrous, but extremely profitable wars later, Ike’s warning was largely in vain. And it is his party that has become a kind of appendage of the military industrial complex -- the defense industry spends tens of millions on lobbying each year and contributes millions to Republican candidates (and the Democratic party, though not as much). The Bush years, with Dick Cheney’s very own Halliburton getting nearly $40 billion in contracts, would have made Ike turn over in his grave.

The Republican party long ago gave up being a reasonable party that actually governs, and Eisenhower would certainly be unwelcome in it today. Trump says Eisenhower was a great president, but if he looked a little bit closer at his presidency and his actual policies — beyond Operation Wetback — he would certainly alter this position. Robert Welch would be glad to see the GOP turning its back on that “agent of the communist conspiracy,” and embracing his deranged and paranoid vision of America.