He's not always right, but Maher's posing provocative questions, and answering them with intelligence, consistency 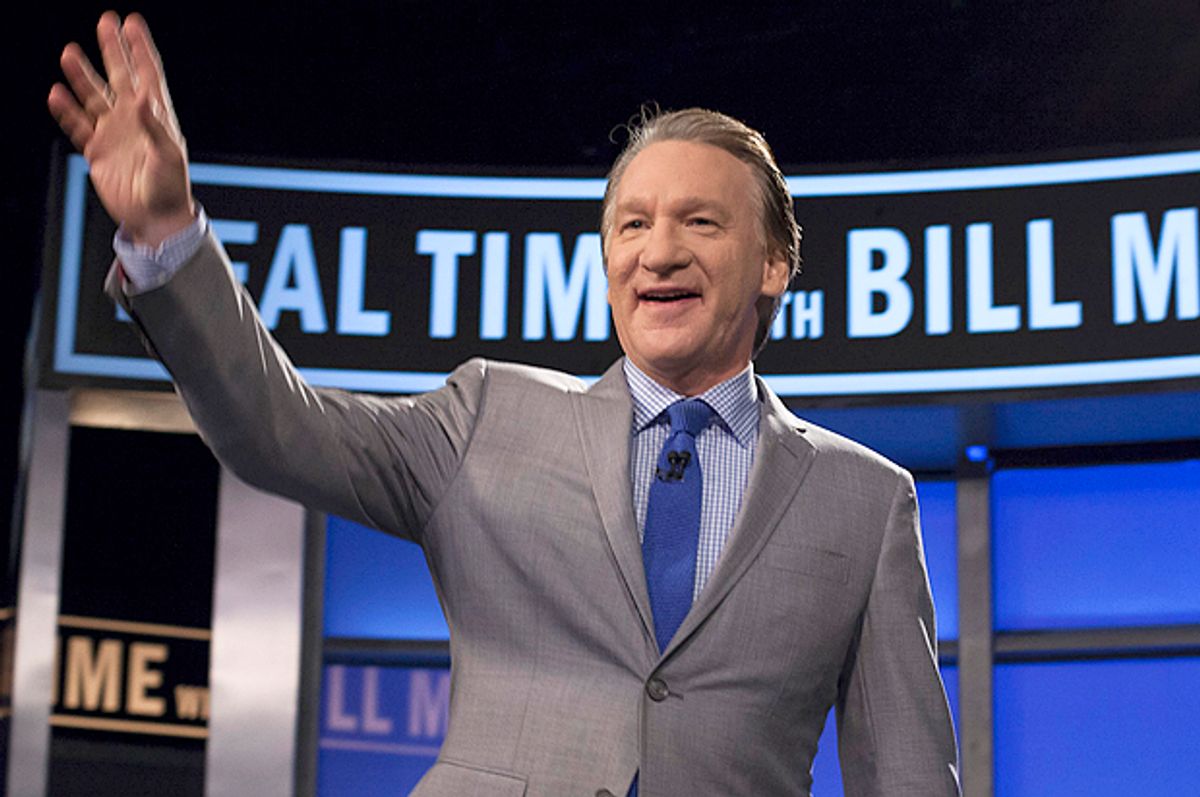 Bill Maher has made his mark as the comedian who refuses to toe the party line—any party’s line.  He has come under attack by both the right and the left for his positions. This week’s show exemplifies his unflinching desire to muddy the waters of extremist thinking and get viewers to ask tough questions and refuse pre-packaged scripts.

He hit the spotlight after September 11 when he rejected the idea that the 9/11 attackers were cowards. Talking with conservative pundit Dinesh D’Souza, Maher stated: "We have been the cowards. Lobbing cruise missiles from 2,000 miles away. That's cowardly. Staying in the airplane when it hits the building. Say what you want about it. Not cowardly.” The comment cost him his ABC show. But he soon landed back on his feet with HBO for “Real time with Bill Maher.”

This week’s show, which tackled both the Paris attacks and campus protests over racial discrimination, reminds us why Maher is a comedian we need to watch.  In the wake of the crises on the campuses of University of Missouri and Yale and on the heels of the Paris attacks, Maher rejected the fundamentalist thinking that often tends to frame these issues.  With regard to the student protests, he attacks racism, but defends free speech.  And in connection to the Paris attacks, he asks why liberals refuse to condemn the oppressive fundamentalism connected to the version of Islam practiced by terrorists.

While we might disagree with his positions, Maher makes some provocative points.  Even more important he asks viewers to resist intellectual extremism and dogmatic ideologies.  This means that we can condemn Islamic extremism without condemning all Islamic people.  And it means that we can fight structural racism while also wondering if the student protesters’ demands are reasonable.

Let’s be clear. Bill Maher can say some outrageous things.  He once compared his dogs to “retarded children.”  But it would be a mistake to dismiss his interventions because they come from a comedian known for being caustic and controversial.   Again and again Maher is willing to ask the questions no one wants to ask.  And one of his key themes is frustration over simple-minded responses to complex issues.

After opening with a sign of solidarity with the French people, he asked: How can we respond in a way that allows us to forcefully condemn the attackers while avoiding a full-scale condemnation of Islam?  In an interview with Asra Nomani, Maher wonders why liberals “will not stand up against Sharia Law, which is the law in so many Muslim countries, which is the law of oppression?” Discussing extremist thinking with Nomani, he states, “I am absolutely sure that ISIS thinks that everything they do—every horrific crime, every atrocity—is an act of justice, and an act for god.”

Maher’s point it that there is an Islamic extremism that is real and the left has lost the vocabulary for speaking about it meaningfully.  In an effort to avoid demonizing an entire religion, he argues, there has been silence on the very real threats of Islamic extremism.  It is an issue that drives Maher nuts and it’s one that will immediately get him called out as an Islamaphobe.

Listening to Maher rant about liberals who are soft on terror, it might even seem like he is on the side of right-wing nut jobs like Ann Coulter. But he’s not on her side at all.  The trouble is that in moments of crisis such nuance almost inevitably gets lost.

He has an unfailing ability to stick his finger in our wounds and ask us why we are surprised that it hurts.  Speaking about University of Missouri, Maher reminded viewers that the university’s president was “a clueless white guy” but “not a war criminal.”  “The question I’m asking is, do we purge clueless people from their jobs. Is that where we are with the battle against racism? Maybe the answer’s yes.”

For what it’s worth, the panel concluded that, yes, the firing was the right outcome.

He then turned to the Yale case.  After quoting from an op-ed that said students were losing sleep, not going to class, skipping meals, and not doing homework as a result of the controversy, Maher characteristically asked, “About an email over a Halloween costume that doesn’t even exist? Over an email? Who raised these little monsters?”

When Maher takes the free-speech position on instances of hate speech, racism, and intolerance he always excites the right. Right-wing outlets like Breitbart will cite him as evidence that the struggles for social equality are a cover for intolerance.

But they will only cite part of what he says.   They will omit mentioning the part of his show where Maher explicitly goes after the idea of the white male as a victim. In a rant on rising suicide rates for white males Maher stated: “It’s hard out there for a wimp, and that’s why tonight I’d like to remind white people of something very important they may have forgotten: You’re white, cheer the fuck up. Jesus, look at history. It’s always a great time to be white.”

He went on to list examples of white privilege:  “Cops don’t shoot you for having your hands in your pockets. When people follow you around a store, it’s because they want to help you find something. Major party presidential candidates aren’t proposing to deport you. You can walk through an entire wedding reception without anyone trying to order a drink from you. And how about this perk? If you’re white, you’re much more likely to be not in prison.”  That’s the sort of thinking we will never see from Coulter.

In the same show Maher criticized some student protesters, praised others, and called out white privilege.  In the same show he called liberals extremists for not going after Islamic extremism.  It’s tricky terrain for comedy and it’s likely to get misunderstood.  But Maher doesn’t care.  If there is one ongoing passion in his work, it is that he won’t back down and he won’t make things easy.

Maher’s trademark comedy refuses to be channeled easily into ideological silos.  And whether we agree with him or not, his desire to ask tough questions and derail fundamentalist positions is a welcome intervention in a media landscape dominated by extremes.