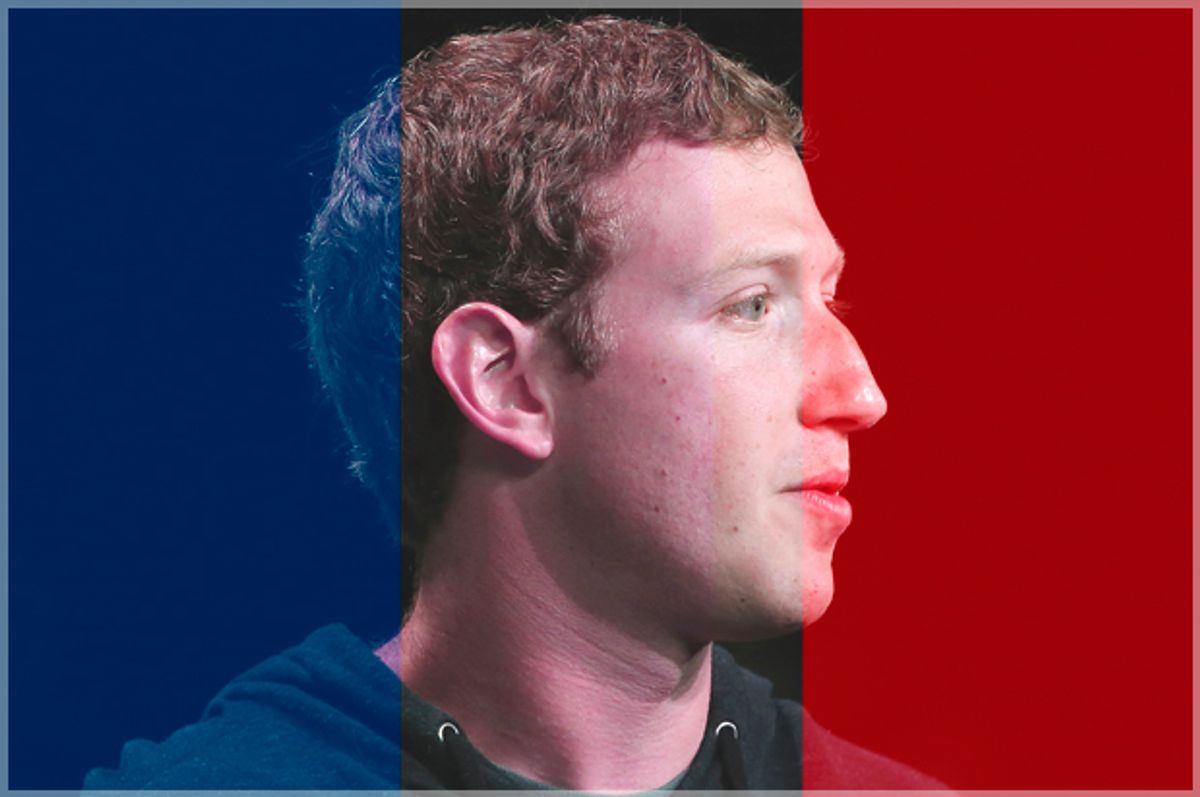 My Facebook profile picture is a white cat. It’s not a real cat. It’s a cat-object created out of rabbit fur, a quirky birthday gift my niece received from one of her tween classmates. She insisted that I use her photograph of it as my Facebook avatar. So there it is, and it will probably stay the rabbit-cat until the next time my niece gets an Idea in her head. It has not been French-flagified on Facebook. I am not about to change it.

My niece is half French. My brother-in-law is French, from France. Through them, I have family-in-law in Paris and its environs. One of them lives in the 10th arrondissement, where the worst of the terrorist carnage unfurled. The French relatives are not French-flagifying their pictures on Facebook. It is ludicrous to assume that their indifference to screening a tricolor flag over their profile photos--a move that, bluntly, requires more tech-savvy than I care to use up brain cells to learn--somehow suggests that they are secretly sympathizing with the terrorists. They’re simply too sorrowful, too exhausted to worry about the semiotics of their social media usage.

More to the point: Since when has an affirmative declaration that one is #Standing with X, Y, or Z, or announcing #Je suis Charlie, #Je Suis Paris, etc., become a performative requirement on Facebook, at the risk of being trolled by outraged strangers policing the allegiances being pledged inside Facebook nation? That emotional energy is not only misplaced, but ironically demonstrates self-involvement masquerading as empathy for others.

For even as I write these words, my niece is sitting in French class at school conversing en français, unaware that a few blocks away, the Yard at Harvard University is being evacuated due to an unconfirmed bomb threat. My niece would panic if she knew, because her mother—my baby sister forever, no matter how old we both get—works there. This morning, a similar bomb threat was issued for Cambridge Public Schools, though that threat was dismissed as a hoax, and the public schools remained open. My niece is too young to be on Facebook and even if she were, the fact that I did not overlay my profile picture with the French flag would mean very little to her. She wants and needs adults to be in the room. A digitized French flag over that weird rabbit-cat she adores will do nothing to assure her that the world is not collapsing, and that her friends and family are safe.

French-flagifying your Facebook profile is a nifty way to let others know that you’re standing with France or whatever, but it is an empty signifier of sympathy that rings hollow in the face of ongoing and very real threats of violence erupting around a world that now includes our backyards. And so, as Claire Bernish wrote pointedly:

“I refuse — despite my partial French heritage — to cloak myself in nationalism of any stripe or star, particularly not now. Because, besides victims in Paris, an incomprehensibly astronomic number of people have been grieving loss of the highest order for some time — in places whose names roll off our tongues as if it’s accepted that violence simply happens there — and a majority likely couldn’t guess the colors on these victims’ flags.”

These are the flags of Lebanon, Syria, Israel, Palestine, Afghanistan, Yemen, and so on, places where explosive, unexpected violence is a daily occurrence, and emotional exhaustion has become the default.

In the wake of the latest attacks on Paris, the New York Times reported,

“Monuments around the world lit up in the colors of the French flag; presidential speeches touted the need to defend “shared values;” Facebook offered users a one-click option to overlay their profile pictures with the French tricolor, a service not offered for the Lebanese flag.”

Thanks to social media, nonetheless, the ideological uses of patriotism stand starkly illuminated, throwing into high relief the political limits of the claim “all lives matter.” (For how long? To whom?)

Frenchify your avatar to your heart’s content, or leave it the way that it has always been. Either way, the attacks on Paris illuminate one terrible new reality: that #Je Suis Paris is now literally true. Pledging allegiance to the red, white, and blue does nothing but make you look good to people with the time to criticize you. Meanwhile, Harvard Yard stands locked and emptied, as bewildered students mill around helplessly, watching as the Boston and Cambridge Police, Homeland Security, the Fire Department, Department of Mass Transportation, and heavily armed officers gather to assess the threat. It looks a war zone. Because to all extents and purposes, it is.