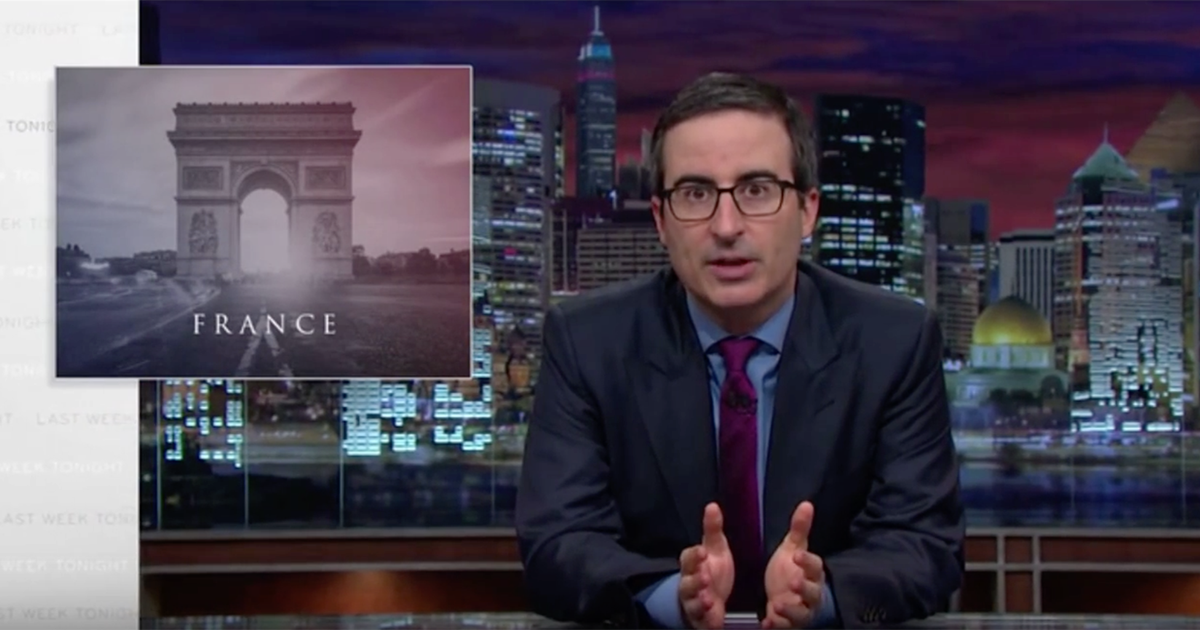 Ah, the advantages of premium cable to express immense anger and frustration. Sunday's "Last Week Tonight," featured John Oliver's profanity-laced tirade that George Carlin would be proud of. From SNL's solidarity, to Colbert's shaky voice of concern, to even Bill Maher's anger, comedians have spent the weekend trying to help the world come to grips with yet another tragedy. Oliver went another route, and instead completely lost his shit.

"Sadly, we must begin with a few words about France which, on Friday, suffered the deadliest attack on its soil since World War II," said Oliver at the top of the show. "Look, it’s hardly been 48 hours and much is still unknown, but there are a few things we can say for certain. And this is when it actually helps to be on HBO, where those things can be said without restraint, because after the many necessary and appropriate moments of silence, I’d like to offer you a moment of premium cable profanity."

And that's when he let ISIS know exactly what they can do with themselves in many varied positions:

"First, as of now, we know this attack was carried out by gigantic fucking assholes—unconscionable flaming assholes—possibly working with other fucking assholes, definitely working in service of an ideology of pure assholery," Oliver said. "Second, and this goes almost without saying: FUCK THESE ASSHOLES! Fuck ’em, if I may say, sideways."

Oliver's third and most important reason was a testament to the Parisian people and culture, which he said will forever endure. "And I’ll tell you why: If you’re in a war of culture and lifestyle with France, good fucking luck! Because go ahead, bring your bankrupt ideology; they’ll bring Jean-Paul Sartre, Edith Piaf, fine wine, Gauloises cigarettes, Camus, Camembert, madeleines, macarons, Marcel Proust, and the fucking croque-en-bouche. The croque-en-bouche! You’ve just brought a philosophy of rigorous self-abnegation to a pastry fight, my friends! You are fucked! That is a French freedom tower!" he said of the pile of decadent caramel drizzle and creme-filled goodness.

"So, to the people of France, our thoughts are truly with you and I do not doubt that there will be more to say about this as events unspool, but for now, we are going to continue with the rest of our show…"

And so the Sunday night in Oliver's Church of Our Lady of Perpetual Exemption. Check out the video below and also a huge congratulations to Oliver and his wife Kate Norley on the arrival of their first child, a baby boy. May he have his father's politics.