I heard the shot that killed my neighbor, but I refuse to be afraid.

After a tragic shooting and a Fox News interview gone wrong, I had to grapple with what it means to feel safe. 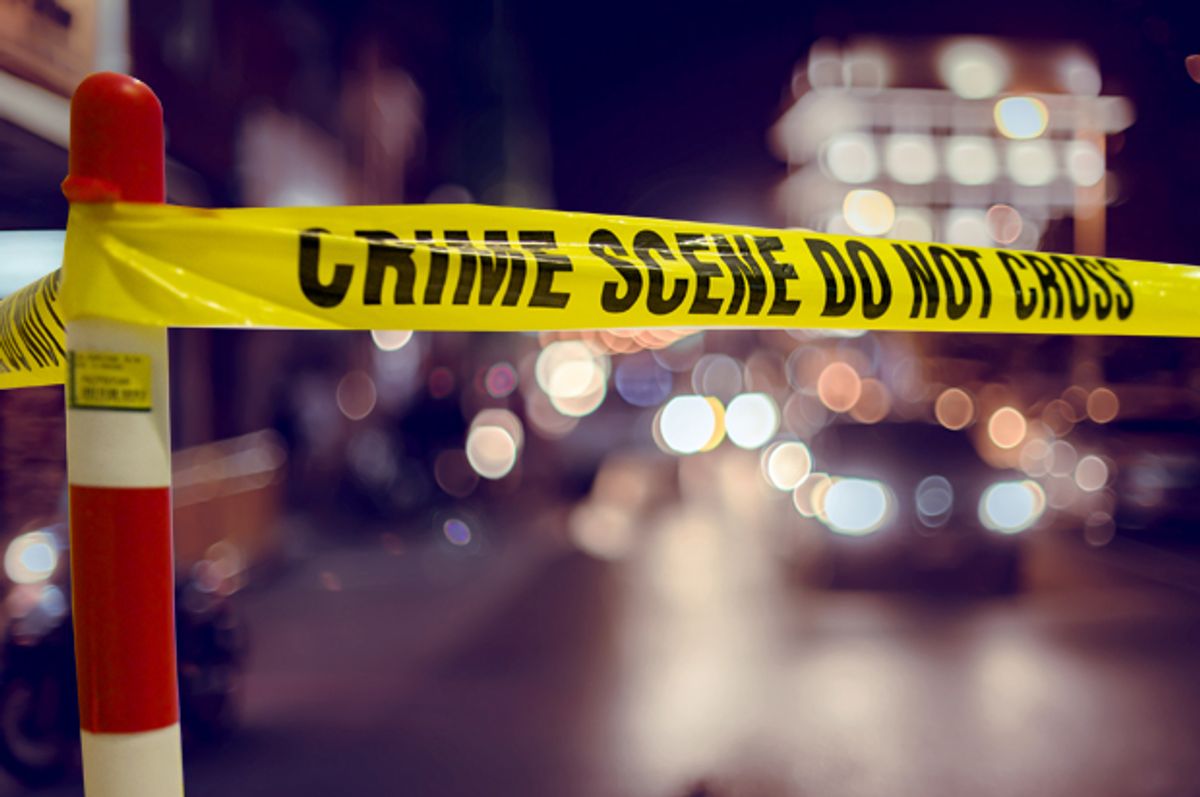 We heard the first shot shortly after 9 that night. My girlfriend and I had just finished watching TV when a quiet though resounding boom halted our conversation. As I often do when I hear a gunshot, I hoped it was just kids shooting off fireworks, even though I knew that wasn’t likely. A gunshot seems to vibrate on a lower, more unsettling frequency.

Remy and I recently moved from Fresno, California, to Saint Paul, Minnesota for work. In Fresno, my house was shot at once while I was watching TV in a nearby room. Gunshots often disrupt the gentle hum of that small city. Before Fresno, I lived in Denver, where I also heard people shooting guns on a routine basis. I’ve gotten somewhat used to violence occurring near my home, but the blast of a gun has never ceased to scare me.

On this night in Saint Paul, I knew it wasn't fireworks I'd heard, but I held out hope that no one was hurt. About 20 minutes after the first shot, we were about to fall asleep when we heard another one, this shot much louder. Remy got up, looked out the window and said, “We should go downstairs.”

She unlocked the front door and walked onto the porch. I followed. Cold air blew through the window screens. Just down the street, a woman spoke on the phone, her voice shaky but purposeful as she said, “He’s been shot.” A wail of sirens pierced the night, and, within two minutes, an ambulance and multiple police cruisers pulled up. Remy and I went back inside, not wanting to gawk. Back in bed, we watched blue and red lights dance across the ceiling.

The next morning, Remy told me that our neighbor died just after getting rushed to the hospital. It’s been a month since the shooting, and I still haven’t comprehended the fact that someone murdered him. I’d seen him walking to and from his car but had never met him. Remy also said that the first boom was indeed a gunshot—another shooting happened just a few blocks away. Thankfully, that victim only suffered a relatively minor injury to his upper arm. Multiple police cruisers were still parked outside our neighbor’s house. Yellow crime-scene tape cordoned off the area where the man was shot.

After Remy left for work, a local journalist knocked on our door and asked if I would answer a few of her questions. I doubted that I had anything to contribute to what she already knew, but I tried to be helpful. I then asked her if the police had caught the shooter or released any additional information. She said what I would read in multiple articles that morning: they weren’t sure if the two shootings were related, nor was there a definitive motive for either one.

A TV reporter came to the door a few hours later. In his mid-40s, the man wore a blue suit and tie with a white button-down shirt. With his neatly arranged brown hair and dimpled chin, he looked like a congressman from the '50s or '60s. He worked for Fox News and asked if I’d be willing to do an interview with him. A cameraman waited outside. I agreed, on the condition that I could do it anonymously and without showing my face. The reporter then asked me a few questions (without the camera rolling) about when I’d moved here.

I sat on the front steps during the interview, watching the crime-scene tape quiver in a light breeze. When the cameraman started rolling, the reporter immediately asked, “Did you expect this when you moved here from California?” and, “Do you feel unsafe living in this area now?”

Located in east Saint Paul, our neighborhood has a reputation for being violent and crime-ridden. Until the night of the shootings, however, my experiences here have been almost entirely pleasant. Our next-door neighbor, a Hmong man in his mid-50s, hosts large barbecues and doesn’t seem to mind that our crazy dog barks at him constantly. Our other next-door neighbors, a white couple in their 30s, have a baby but haven’t yet complained about my obnoxiously loud drumming. A Catholic church that’s recently been converted into a mosque sits on the corner of the block, and live music occasionally spills from its doors. Our street, Orange Avenue, is lined with trees and lower-middle-class, pre-tract-home-era houses, each with a neatly cut front lawn.

The reporter was trying to get me to emphasize my fear, but I said that I still felt safe here—that, rather than fear, I mostly felt sorrow for the man who had died and for his family. But after the interview was over and I had time to contemplate the murder, I began thinking a lot about what people really mean when they talk about feeling safe in certain neighborhoods. Speaking with other white people, I’ve noticed that “safe neighborhood” routinely doubles as racist code for a whitewashed hegemony.

I used to live in a predominantly black and Latino neighborhood in Denver. Once, when my cousins came over to visit, they both said that they worried about getting mugged while making the 100-foot trip from their car to my front door. It was a quiet and peaceful spring day, and I think they said this because they’d seen a group of black guys walking down the street. My cousins lived in Parker, an extremely white suburb of Denver, which they and their parents routinely described as “really safe.” Around this same time, I told a couple from Littleton—another mostly-white Denver suburb—that I lived in Five Points, to which one of them replied, “But isn’t it really dangerous over there?” Considering that the Columbine shooting had ravaged this couple’s family and community 11 years prior, their question confounded me.

I personally feel less safe in predominantly white neighborhoods, partly because whites are most often victimized by other white people when it comes to violent crime. According to a Bureau of Justice Statistics report from 2013, 56 percent of violent crimes against whites were perpetrated by whites. The same report also shows that white people were far more violent than any other individual racial group in America. And yet, despite these facts, white reporters and citizens often use violence in diverse areas to justify their choice to live in racially homogenous neighborhoods, many of which have direct connections to the redlining, blockbusting, and racist real estate covenants of the mid 20th century.

I grew up in an overwhelmingly white town in Wyoming, and, from an early age, I knew that violence can occur anywhere. Everyone I knew in Rock Springs owned at least one gun. After the Columbine massacre (which happened when I was in seventh grade), the idea of an entirely safe neighborhood, town, or city seemed like an illusion. Dylan Klebold and Eric Harris showed us that anyone—anywhere—can pick up a gun and kill someone. James Holmes, Adam Lanza, Dylann Roof, and Christopher Harper-Mercer’s acts have echoed this truth in the most ghastly ways imaginable.

Instead of making me feel unsafe in my neighborhood in Saint Paul, the shooting of my neighbor reaffirmed my sense that, during a time when guns are so easily available, indiscriminate murder is always possible, no matter where you live. This reality terrifies me, but I try not to let my upbringing in a racist culture exacerbate that fear or foster a false notion that a white neighborhood equals a safe neighborhood.

During my interview with the Fox reporter, the victim’s identity was released. Htoo Baw was a 54-year-old husband and father from Myanmar. The reporter saw Baw’s name and said, “It’s an ethnic name.” I bristled at what I seemed to me a familiar and casual racism, and regretted that I’d done the interview, which aired that evening. Following my dialogue about feeling safe in the neighborhood before the murder, images of blood on the sidewalk appear as the reporter says, “Now all of that has changed.” I’ve since wondered if this reporter would have covered Baw’s death at all if there weren’t any white people living in my neighborhood, considering that so much violence in minority-majority neighborhoods doesn’t get news coverage—especially if it’s “gang related.”

“Do you feel safe?” the reporter asked me. I wonder if he would have posed the same question to an African-American man. I wonder why it’s only after white people like myself begin to infiltrate an area that we bother to ask the question.

J.J. Anselmi's first book, Heavy: A Memoir of Wyoming, BMX, Drugs, and Heavy Fucking Music, is forthcoming from Rare Bird Books in January 2016. He's a regular contributor to The A.V. Club and The Quietus. You can find more of his writing here: www.jjanselmi.com