GOP candidates talk about "radical Islam" and a "clash of civilizations." They don't even know what they don't know 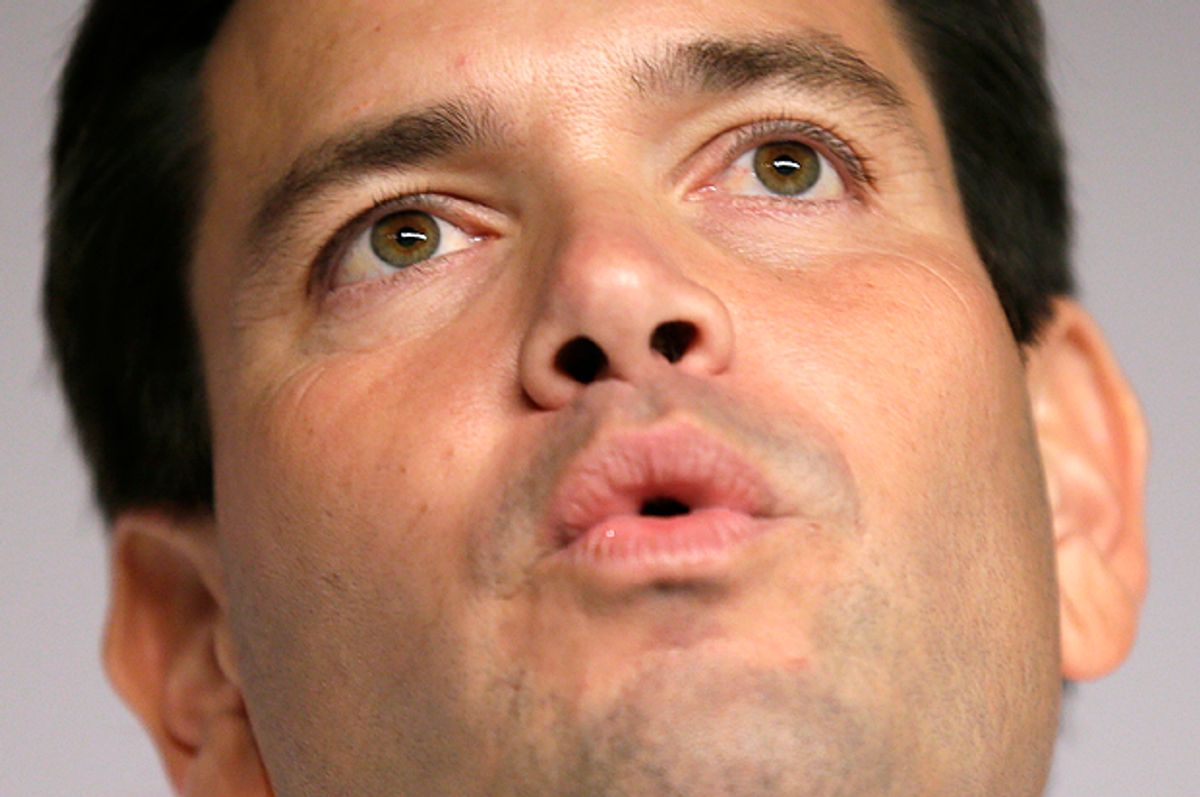 In the days immediately following 9/11, George W. Bush's approval skyrocketed from the 50 percent range it had been hovering around to a stratospheric 91 percent. Now, the entire GOP field of floundering wannabes is desperately hoping that the terrorist attacks in Paris can work the same sort of magic on them. Unable to come up with anything remotely positive for the American people to rally around, they're eager to take the utmost advantage of fear, forming a blatant de facto partnership with the terrorists by amplifying the terror their acts inspire.

Second-tier candidates Marco Rubio and Ted Cruz were particularly virulent and vacuous in their responses. "This is a clash of civilizations, and either they win or we win," Rubio said in a campaign video—a theme he echoed repeatedly. “They literally want to overthrow our society and replace it with their radical Sunni Islamic view of the future.”

So, Islam is like the Nazi Party? This isn't Ben Carson speaking. It's not Donald Trump. It's the Republican establishment's “new hope” answer to those two!

Also focusing on semantics, Ted Cruz made his patented move for jugular. “We must immediately recognize that our enemy is not ‘violent extremism,’” Cruz said in a statement. “It is the radical Islamism that has declared jihad against the West.” It's a serious threat that can only be met by tearing our own vaunted values to shreds, he quickly went on to explain. “It will not be deterred by targeted airstrikes with zero tolerance for civilian casualties, when the terrorists have such utter disregard for innocent life.”

As Rubio and Cruz's careless comments may remind us, semantic formulations divorced from reality are prime symptoms of everything wrong with how we've responded to 9/11 and everything after it—as well as to the threats leading up to it.

There's so much foolishness being spouted just now, it's a real challenge to focus on the root of what's wrong with it. But the “clash of civilizations” rhetoric is especially appealing, and especially far off the mark. Samuel Huntington's 1996 book The Clash of Civilizations popularized the phrase, but conceptually it was an unholy mess, made worse by the fact it clashed so fundamentally with Huntington's own views in his earlier 1991 book, The Third Wave: Democratization in the Late Twentieth Century. In a perfectly-titled piece for the American Prospect, “The Clash of Samuel Huntingtons,” Jacob Heilbrunn wrote:

Where Huntington I claimed that a third wave of democracy was washing across the globe, Huntington II now seems to argue that it never amounted to more than a momentary splash.The Clash of Civilizations holds that the United States is in decline, that democracy is limited to Western cultures, and that America must accept Asian authoritarianism as a good thing.

Those who use the phrase today escape from this incoherence by adopting another: Western Civilization is both universal and uniquely American, depending entirely on context, mood, and which day of the week (or hour of the day) it is. Hence the GOP candidates near-unanimity in conflating anti-immigrant rhetoric with anti-terrorist rhetoric. Mike Huckabee, for example, followed up calling ISIS “a threat to western civilization,” with his top proposal being “Close our borders instead of Guantanamo.”

One thing's for certain: if anyone's eager to embrace the “clash of civilizations” rhetoric, it's ISIS. As the Guardian recently pointed out, this has been laid out specifically in advance:

In February this year, in a chilling editorial in its propaganda magazine, Dabiq, Isis laid out its own strategy to eliminate what the writer, or writers, called “the grey zone.”

This was, Isis said, what lay between belief and unbelief, good and evil, the righteous and the damned. It was home, too, to all those who had yet to commit to the forces of either side.

The grey zone, Isis claimed, had been “critically endangered [since] the blessed operations of September 11th”, as “these operations showed the world” the two camps that mankind must choose between.

Over the years, since successive violent acts had narrowed the grey zone to the point where by the end of 2014 “the time had come for another event to ... bring division to the world and destroy the grey zone everywhere.”

That was what the Charlie Hebdo attacks were supposed to achieve. And because they failed, the most recent attacks were far more bloody. But while ISIS has been very adept at taking advantage of and recruiting a small fraction of discontented youth, both in the Middle East and Europe, it is ultimately just as clueless as the GOP candidates who share its outlook. As David Shariatmadari pointed out for the Guardian, "Isis hates Middle Eastern civilisation too," and he went on to elaborate:

The word civilisation has its origins in the Latin civis, a citizen, itself derived from an earlier form meaning “to settle.” The corresponding Arabic word is madaniya, its root maddana, “to build cities.” We talk of “returning to civilisation” when we come back to town from the countryside. Civilisation is about living together, people pooling their resources, sharing the same space. Cities work best when people are free to move about unmolested, to work and play, to learn and to be entertained.

Isis represents the opposite. In its centres of power, normal life is suspended: there is only one correct way of doing things. Religious minorities are killed or forcibly converted. There is fear everywhere and no pleasure. These are military cantonments, not cities in the usual sense.

ISIS has been very shrewd in promoting its alternative to civilization—but we are the ones who've opened the door for them by destroying civilization, first in Afghanistan starting under Jimmy Carter and Ronald Reagan, then in Iraq, under Bush. In the Nation last month, Lydia Wilson reported, "What I Discovered From Interviewing Imprisoned ISIS Fighters," and what she discovered was boys deprived of civilized life, just when they needed it most:

These boys came of age under the disastrous American occupation after 2003, in the chaotic and violent Arab part of Iraq, ruled by the viciously sectarian Shia government of Nouri al-Maliki. Growing up Sunni Arab was no fun. A later interviewee described his life growing up under American occupation: He couldn’t go out, he didn’t have a life, and he specifically mentioned that he didn’t have girlfriends. An Islamic State fighter’s biggest resentment was the lack of an adolescence.

No wonder, then, that ISIS struck out at Parisian nightlife, at everything its recruiting pool had missed out on. It's not a war, or even clash of civilizations. It's war of barbarism against civilization—except for one thing. We started it. Afghanistan under the Soviets was not a paradise, but it was a civilization. And we chose to destroy it, to “give the Soviets their own Vietnam,” as the rhetoric went at the time. And we chose the most hardline mujahadeen to do it for us—not the ones with most support, but the ones least inclined to stop fighting, ever. Because that's what we wanted: We wanted barbarism. We thought we could deploy it tactically and strategically. We still do, with our drone strikes, and the rest of our selective air war. We were wrong then, and we're still wrong today. But we've accumulated so many more mistakes since then, it's impossible to even keep track, much less begin to correct them. And for that, of course, we'd first have to want to correct them.

Not the GOP candidates, though. They'd much rather keep on making every mistake we've ever made, and calling people names is just the least of it. As long as they're out of power, there's only so much damage they can do—though ISIS will surely make the most of their rantings. But if one of them should win office in 2016? The clash of barbarisms would be amped up as never before.