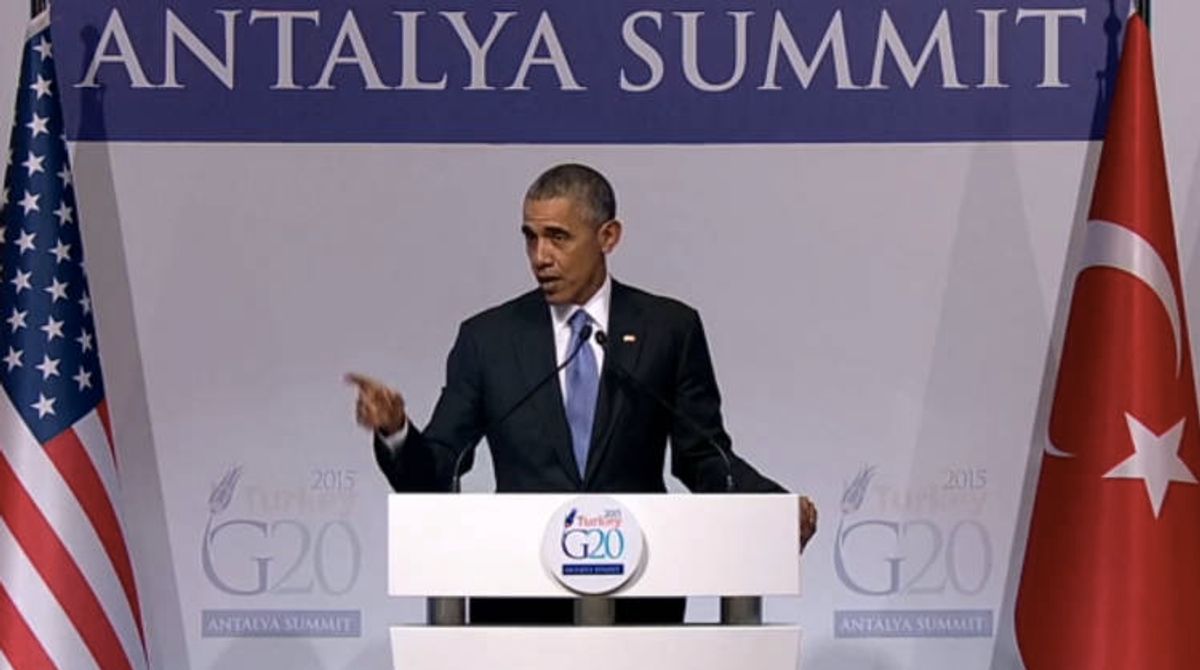 Speaking at a news conference at the G20 summit in Antalya, Turkey, President Obama denounced ISIL as "the face of evil" but warned against the "dark impulse" to discriminate against Muslims and called out Republican presidential candidates for their "shameful" scapegoating of Syrian refugees following the terror attacks in Paris.

Reassuring Americans that the Syrian refugees relocated to the U.S. will undergo "rigorous screening and security checks," Obama did not back down from his prior pledge to increase the number of Syrian refugees over two years.

"Slamming the door in their faces would be a betrayal of our values," the president said, mentioning that the majority of refugees fleeing the war zone are themselves victims of terror. "We can and must do both," the president said of accepting refugees while fighting ISIL.

The press conference was then opened to questions and a clear pattern of thinking from the Western press emerged:

"Is it time for your strategy to change?"

"Have you underestimated their abilities?"

"Do you really understand this enemy well enough to defeat them and protect the homeland?"

"Why can't we take out these bastards?"

A clearly frustrated Obama pushed back forcefully against the prevailing media narrative in the room that he had acted weak in the face of an unprecedented international terrorism crisis.

"The only thing they are doing," Obama explained of his critics, is "talking as if they are tough."

"When you listen to what they say, what they propose, many of the things they suggests are things we are already doing," Obama said, dismissing the "bellicose" rhetoric of his critics. "Folks want to pop off and have opinions about what they think they would do, present a specific plan. If they think that their advisors are better than the Chairman of my Joint Chiefs of Staff and the folks on the ground, I want to meet them," he defiantly demanded.

"When I hear folks say maybe we should accept the Christians but not the Muslims. When I hear political leaders suggesting that there would be a religious test for which a person who is fleeing from a war-torn country is admitted, when some of those folks themselves come from families who benefited from protection when they were fleeing political persecution, that’s shameful, that’s not American, that's not who we are” Obama said, pointing to the reckless rhetoric of many GOP presidential candidates, including Texas Senator Ted Cruz and Florida Senator Marco, whose parents fled Castro's Cuba. “We don’t have religious tests (for) our compassion,” Obama forcefully insisted.

Obama urged elected officials to not feed the "dark impulse" to scapegoat all Muslims for the actions of terrorists and called for Republicans to follow the example of former President George W. Bush, who called Islam a religion of peace in the days following 9/11, and to not fan the flames of a religious war.

“ISIL does not represent Islam, it is not representative in any way of the attitudes of the overwhelming majority of Muslims,” the president insisted. "It is very important that we do not close our hearts to these victims of such violence and somehow start equating the issue of refugees with the issue of terrorism."

Watch President Obama respond to his critics, via NBC News: