Stop smiling at this liar: Benjamin Netanyahu will not get away with this much longer

Netanyahu goes unchallenged in Washington, again. The next generation of progressive activists won't allow that 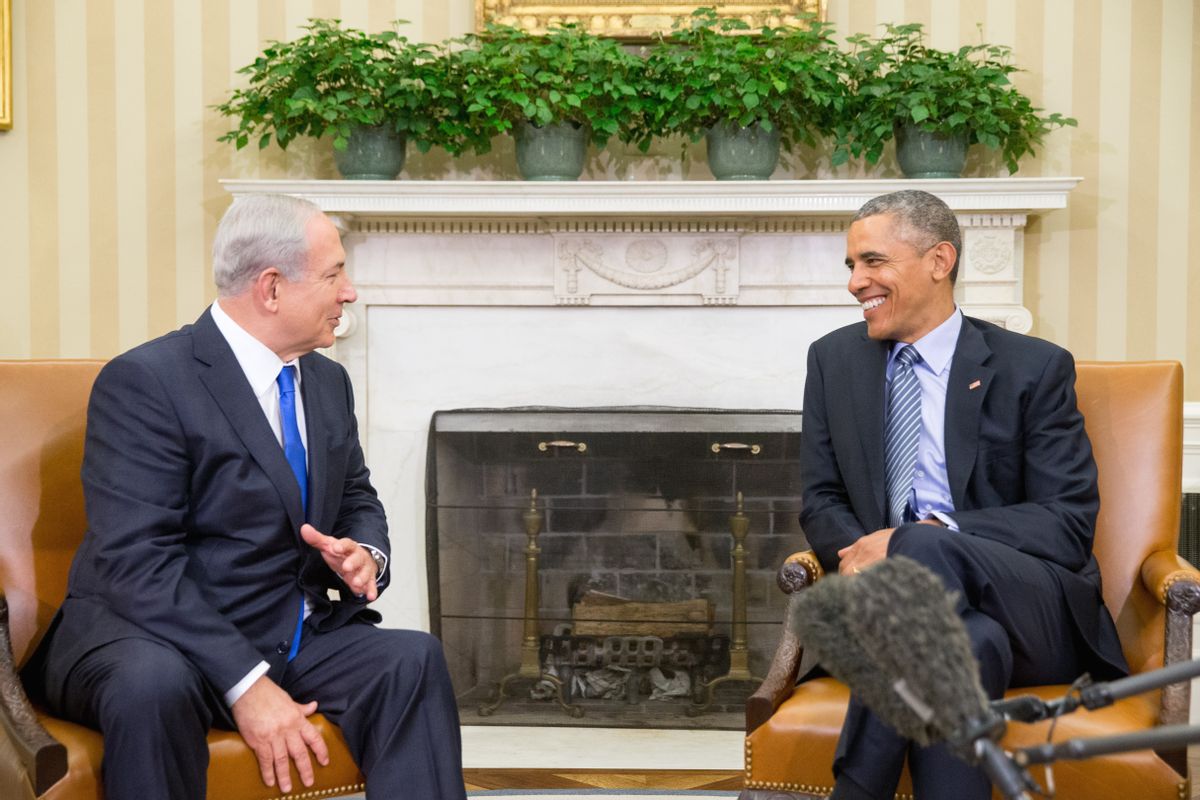 President Obama's restraint in his joint press conference Monday with Israeli Prime Minister Netanyahu was noteworthy. Many a lesser politician would have burst out laughing when Netanyahu claimed that he remains committed to the two-state solution.  Netanyahu is, after all, a man who has dedicated his political career to destroying the two-state solution. Of course, it would also have been entirely appropriate for President Obama to press Netanyahu publicly on the matter after a previous over-the-top lecture by Netanyahu in the president's own home.

Between Monday's meeting with Obama and Tuesday's spectacle of a prostrate Center for American Progress (CAP) with its hour-long softball interview of Netanyahu, there was fertile ground for criticism of Netanyahu’s multiple misrepresentations. Anybody who bought the prevarications Netanyahu packed into his short visit simply has not been paying attention. CAP's president, Neera Tanden, evidently has not been paying attention as a variety of outright lies and misrepresentations passed by unchallenged.

Netanyahu's ability to ingratiate himself with the faux leftist leadership at CAP is an indication that the immense progress the Palestinian freedom movement has made among grass-roots American progressives has not made its way fully into the U.S. Congress or the leadership of a leading progressive institution.  Many progressive leaders are out of step with younger activists who recognize that nearly 50 years of dominating another people is unacceptable.  When the generational change comes – nobody seems to be able to predict when for me – the Democratic Party may well be shaken to its core.

Already hawkish Democrats and Republicans alike are scrambling to criticize the European Union for slapping warning labels on products that come from Israeli settlements in the occupied West Bank. In reality, this is just a first step in our effort to get Europeans on board for Palestinian freedom.  The next step will be for Europe to ban all settlement products for being made in colonies illegal under international law. Members of the U.S. Congress may not heed international law, but they should at least heed Palestinian private property rights, which are frequently trampled in the establishment of these settlements. Were white South Africans establishing such colonies and treating Palestinians so abysmally we would long since have moved from labeling to banning such products and Palestine would be much farther along the road to freedom.

As we enter the final year of President Obama’s eight years in office, we must take stock of how things have changed internationally for Palestinians. Europeans are slowly moving into our camp and recognizing that Israel and its right-wing leaders are an impediment to peace.  Things are also changing for the better with grass-roots Democrats. But President Obama himself, after a promising beginning, has fallen short.  Ben Rhodes, assistant to the president and deputy national security adviser for strategic communications and speechwriting, may criticize Israelis and Palestinians alike for failing to make the necessary compromises – truth be told it is Israel that ought to comply with international law – but the Obama administration itself has failed to educate the American public as to why what Israel is doing in occupying another people for almost half a century is morally wrong and inconsistent with the values of Americans and people around the world.

President Obama and much of his team seem to be throwing in the towel on further progress in the peace process, apparently content to have pushed through the Iran nuclear deal over Netanyahu’s objections. Now the U.S. government may well provide an additional $2 billion per year in military aid to Israel as a consolation prize to Netanyahu for his not having prevailed on Iran.  This will make the Palestinian situation in the occupied West Bank and Gaza more grim and make Israel more likely to follow a belligerent course of action with Arab neighbors. President Obama, rather than calming the region, is bequeathing to his successor an Israel bristling with arms and inclined to use them in a world where few major powers urge Israel to take a different path. Instead, he should be calling out the Israeli government for policies that are self-isolating and for the false belief that it can manage this conflict, forever extending the date of Palestinian freedom. It simply will not work and only guarantees intermittent violent conflict into the future.

So what should President Obama do in his last year in office?

Realistically, President Obama is unlikely to do any of these. Consequently, he will deliver to his successor a region that is likely to catch fire repeatedly in the next four to eight years. Israel will not feel inclined to negotiate unless there is pressure, probably not just from the Europeans but from the Americans as well. Israel’s leaders have determined that they prefer expansion into occupied East Jerusalem and the West Bank more than they prefer the prospects of immediate peace with Palestinians. These leaders seemingly think they can have expansion and calm at the same time. The current situation belies that false notion yet Israel’s extreme leadership, with its increasing fascism, thinks it can impose inferior rights on Palestinians and avoid international criticism and raging conflict.

Israel’s policies are creating a nightmare for future American leaders who will have to choose between an apartheid Israel and the necessary Palestinian freedom American leaders have wrongly downplayed for decades.