We expect comedians to comfort us: "SNL," "The Daily Show," and comedy's new ritual of public mourning 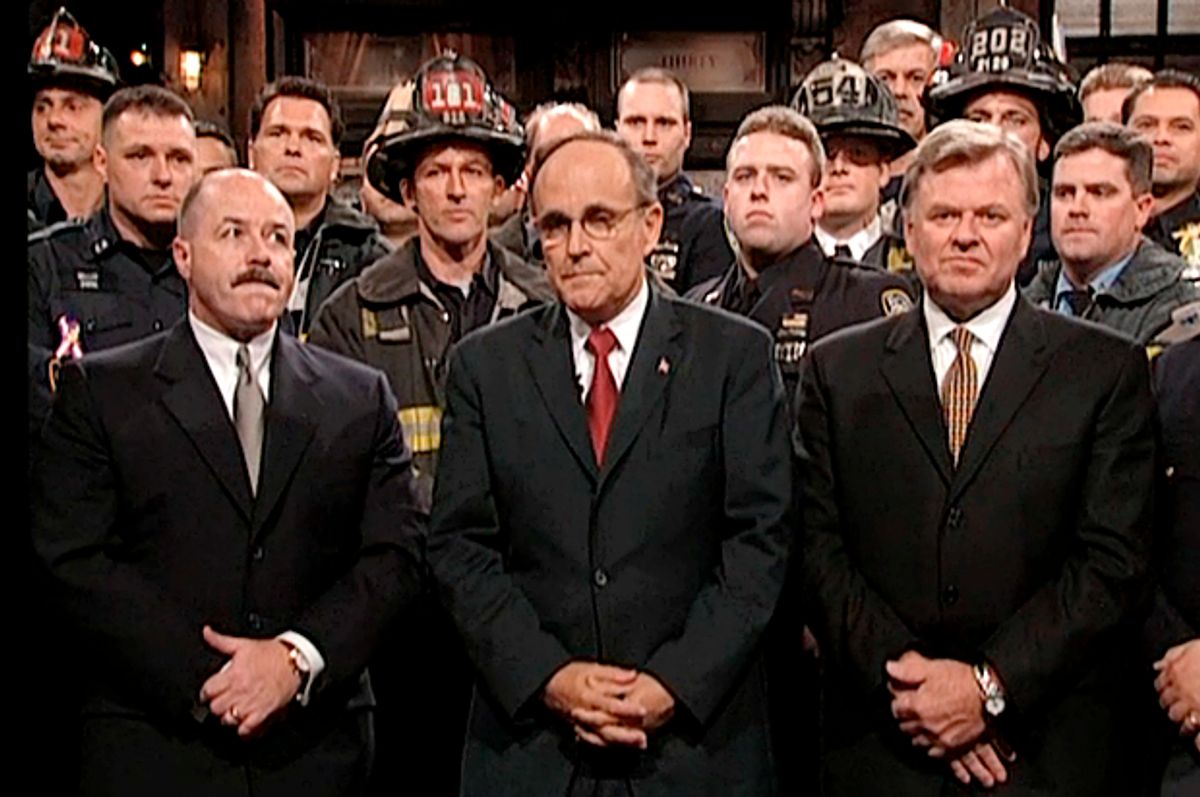 We’ve heard a lot by now about comedians – Amy Schumer, Chris Rock, Sarah Silverman -- as today’s public intellectuals. During Jon Stewart’s heyday, many viewers considered “The Daily Show” a more reliable guide to the news of the day than straight news programs. Television audiences now look to Stewart alums, including the lighter-weight Trevor Noah and the comic-manic John Oliver, to connect with political and social issues in a substantial way.

All of this makes perfect sense, but it’s led to something that comedy shows -- news-driven and otherwise – probably did not bank on: Comics now have to make public statements in the wake of tragedies, and it’s not always a natural move for them. So far, the major comedy shows have done this pretty well. Even Bill Maher, who could have emerged with a stream of xenophobic nonsense, did not embarrass himself.

But as tragedies – terrorism, school shootings – multiply, will comedians find themselves forced into a corner, giving the same earnest address each time, with just the details changed? Are comedians limited by what they can get away with the same way that speeches at funerals often tend to sound the same no matter who's giving them?

Could these civic consolations become earnest or predictable, in the way The Onion seems to be mocking when it drags out the headline "No Way To Prevent This,’ Says Only Nation Where This Regularly Happens” after each public shooting, with just a change to the photo and dateline?

Most comedy and satire, of course, follows different rules than public consolation or catharsis: They often turn on discomfort, mockery, or pitting one side against another. Is there a smart, creative way for a comedian to deal with tragedy?

The standard we’re still living with was set by "Saturday Night Live" a few weeks after the September 11 attacks. There was probably no other way for a show – one strongly associated with New York, with a wide-ranging and generation-spanning audience – to avoid opening with a tribute of some kind. “Our hearts are broken, but they are beating, and they are beating stronger than ever,” a bespectacled Mayor Rudolph Giuliani said, surrounded by members of local police and fire forces who he called heroes. “We will not yield to terrorism.” Even Bernie Kerik got applause.

The camera then moved over to Paul Simon playing “The Boxer” on an acoustic guitar. The symbolism of this fixture of New York music, appearing after the city’s longtime mayor, was pretty hard to miss: These solid, longtime figures were still standing, despite the horrific attacks; likewise, the city and its spirit would continue.

SNL also used music after the shooting in Newtown, Connecticut in December 2012, with a children’s choir singing “Silent Night.”

This weekend's "SNL" worked in the same lineage: Cast member Cecily Strong, in a black dress, led the cold open with, “Paris is the city of lights. And here in New York City, we know that light will never go out. Our love and support is with everyone there tonight. We stand with you.” She spoke first in English, then in French: It was understated and classy, striking just the right tone.

"SNL"’s responses were all effective in a broad-based way that did not take strong political stands or risk alienating part of the viewership. Another approach was Oliver’s profanity-laced take: We are not sadly resolved to persevere, but defiantly resolved to insult the terrorists. (His rant turned heavily on variations on one piece of anatomy.)

This was less consoling, but had the advantage of being actually funny, which may be important on a comedy show. Or is it?

As thoughtful as "SNL"’s nods to tragedy have been, it’s hard not to wonder if there might be only a limited number of ways comedy can do this. In the classical world, up to Shakespeare and beyond, plays were divided into comedies and tragedies. There might be sad moments in one, and funny moments in the other, but the categories were pretty strict, and this may say something about the way western culture tends to engage emotionally.

So far these shows have avoided being mawkish on one hand or inappropriately irreverent on the other. It’s not an easy line to walk.

The real test of whether there’s any room left on the tightrope will be how Noah handles it on “The Daily Show” tonight. He’s got perhaps the best writers in the business, and they’ve had a few days to prepare. But Noah lacks the gravitas of Stewart, who would have likely offered both anger and sentimentality in heavy doses: Stewart's inability to hide behind the news with the anchorman's detachment became a major part of his style.

Tonight’s “Daily Show” may make audiences pine for Stewart they same way they did the first week or so after he left — or maybe there’s more room in that awkward little corner than it might seem.