My friend asked me to shave his b*lls 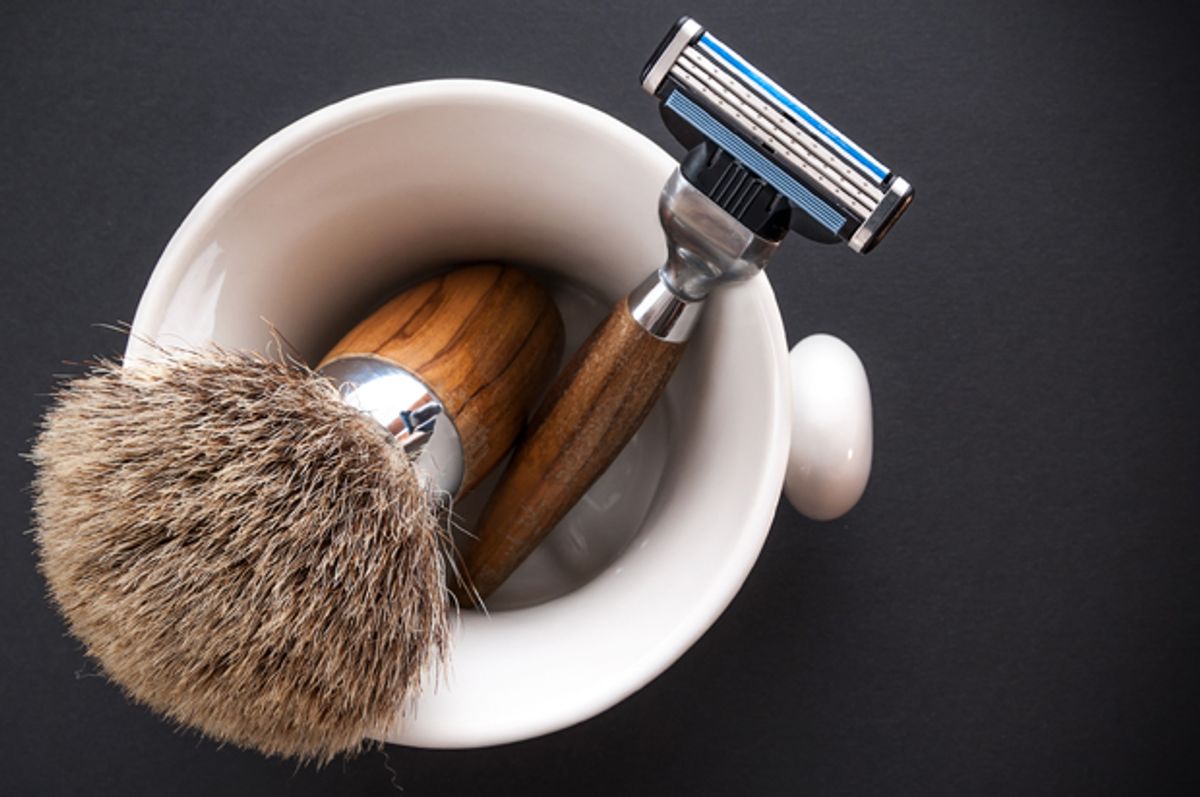 They say nothing helps you get over one man like getting under another. I say the sex isn’t really necessary. Nothing makes you forget one man like having another one’s genitals staring you in the face like a sullen proboscis monkey.

The trinity before me belongs to my friend “Chow,” who is getting a vasectomy tomorrow.

“I got to shave my balls,” he said on the phone. Before I fully realized what I’d done, I agreed to help him out with this endeavor, to be his scrotal Sassoon.

And I want to help because I’m really proud of Chow for getting a vasectomy. A man taking control for his own fertility isn’t just responsible; it’s sexy. This is a guy that doesn’t get pushed around, not by chance, not by cha-cha.

Plus, I thought the shaving idea was funny, like a subplot on "Modern Family."

In addition having the weirdest plans of anyone I know that day, I got the gift of finding out there’s a World Vasectomy Day, and it’s on my birthday: November 13. I kind of love the idea of men on a global scale focusing on their genitals on my birthday, even if it’s not directly on my behalf.

“Men on a mission to save the planet!” is how filmmaker Jonathan Stack, co-founder of World Vasectomy Day, describes this annual initiative to educate the public about vasectomies and get the conversational balls rolling about about men taking part in family planning. Considering that most men curl up like pangolins at the mere mention of vasectomy, it’s fascinating to talk to guys who can’t wait to discuss it. They are on a mission! And just like a superhero, one even wears a mask.

The mask is a surgical one and behind it is World Vasectomy Day co-founder, Florida urologist and vasectomy virtuoso Douglas Stein.

“I did general urology for 17 years and found that the biggest unmet need was vasectomies for low-income people,” says Stein. Stein has become the vasectomy services provider for 34 counties in Florida under the federal program Title X, dedicated to family planning services for low-income people.  A meeting with Ramon Suarez, founder and president of No Scalpel Vasectomy International, led Stein to do this work internationally.

Stack was making a film about Stein’s work and while traveling with him in Kenya and was inspired to create World Vasectomy Day to celebrate the men who were taking responsibility for their fertility. While any doctors anywhere can participate, this year’s event is headquartered in Nusa Dua, Bali, Indonesia.

As you’d expect from family planning champions, the date and location are no accident.

From Nov. 7 to 12, Nusa Dua also hosted the International Family Planning Conference, a gathering of major players in that field including the Bill and Melinda Gates Institute for Population and Reproductive Health. Stack hopes to get World Vasectomy Day on their radar to be part of that conversation.

“We will be live streaming from Bali, but due to cultural issues, it won’t be as ‘open’ as last year,” Stack says, referring to live, on-camera vasectomies (during which some patients blithely chatted with interviewers), which Stein was able to do at events in Australia and Florida.

Men in the video give reasons for wanting vasectomies that include environmentalism, taking the burden of birth control off a wife who has had two C-sections, and taking part in the cause of improved international family planning. According to the World Health Organization, 800 women die each day from complications from pregnancy and childbirth, 99 percent of them in developing countries.

“We will also set up Skype calls with doctors' patients while doing vasectomies,” Stack says, something that will take place in other locations around the world as well.

Last year, 500 doctors performed 3,000 vasectomies on the day of the event. This year Stack hopes for 4,000. And although it’s more about discussion than numbers, all that brotherhood around a positive cause helps a lot.

“What a man is afraid to do alone, a thousand men together don’t hesitate,” Stack says. “Who is going to jump out of the boat and storm the beaches of Normandy by himself?”

I can’t offer Chow brotherhood, just support, which is why I’m spending my first free Saturday in months watching video tutorials on nut-shaving: I’m afraid of giving Chow an accidental vasectomy in his own bathroom.

In one video a doctor shaves a scrotum like he’s erasing a chalkboard. In under a minute the patient is as slick as a china teacup. He says it’s best to work quickly and not lift the razor off the skin, which is just the opposite of the way I planned to do it: with agonizingly slow deliberation. I even plan on bringing my spiffy new magnifying glass to identify difficult terrain.

“Wow, you really have a lot of hair,” I say, sitting on the edge of the bathtub in which Chow stands, pawing at his pubes like kid who's lost a baseball in some monkey grass. I hope when it’s all gone he doesn’t cry like Shelby did in "Steel Magnolias."

At first I’m tentative, but within minutes I’m Edward Scissorhands, clipping away, getting rid of the brush. Soon there’s enough hair in the bathtub to make a toupee.

“I’m going to take it and make a voodoo doll,” I tell him. He screams and washes it down the drain.

Prelim trim done, Chow stands there nude, bobbing up and down and grinning, getting a breeze down there for the first time, I’m guessing, since puberty.

Chow isn’t showing an ounce of trepidation and I’m impressed with how cool he is, even eager, about taking this big step.

It’s the kind of attitude that inspired Jonathan Stack, the willingness he saw in men around the world. World Vasectomy Day as a way to celebrate their decision, which isn’t always an easy one.

“Evolutionarily, you don’t want to exit the gene pool,” he says. But “you also don’t want more kids.”

People construct narratives to help do the tough things they need to do, Stack says, and for men across cultures, it was the altruism of having this procedure done to improve the lives of their families that spurred them to action.

People “find the best in themselves and what (these men) found was love of their children, love of their wives,” and the thought that they were doing this for them.

It’s also a very effective one. In fact, going seedless is the most effective birth control for men, according to the CDC in 2011, with a failure rate of .15 percent.

It’s also less expensive than accidental fatherhood. Planned Parenthood puts the cost of a vasectomy at $0 to $1,000, and it’s worth checking with your county health department or insurance company to find out if a free or low-cost option is available. In contrast, a baby born to a middle-income U.S. family in 2013 -- planned or not -- will cost $245,340 to raise to age 18, college not included, according to the U.S. Department of Agriculture (with various adjustments for location and projected inflation).

Despite these pluses, there are a lot of complicated layers to Stack and Stein’s quest for making vasectomies available to more people who want them, from the logistics of setting up medical operations in places that might not be very well-equipped to cultural differences in regard to family structures and how such procedures are viewed. It makes the mission that much more admirable.

“Our objective is to make vasectomies available to those people who recognize their own limitations and who want a dependable way to stop having children when they choose to do so,” Stein says. It’s not about dictating smaller family size. “We prefer to say 'have no more children than you really want. Every child is a treasure and should be treasured,'” which might be easier when you’re not spread too thin.

Considering all this, a vasectomy could be the kindest cut of all.

Chow was a brave and conscientious patient. He had no trepidation about his vasectomy and once I cleared the brush even did his own shaving. Why did either one of us think he couldn’t? Maybe it’s just nice to have someone with whom you can act like a goofy kid the night before you do something so grown up.