"Why can't we take out these bastards?": Why the media's apocalyptic Paris response should be making you very nervous

Following the horrific events in Paris, establishment press figures have been united in one thing: A call for war 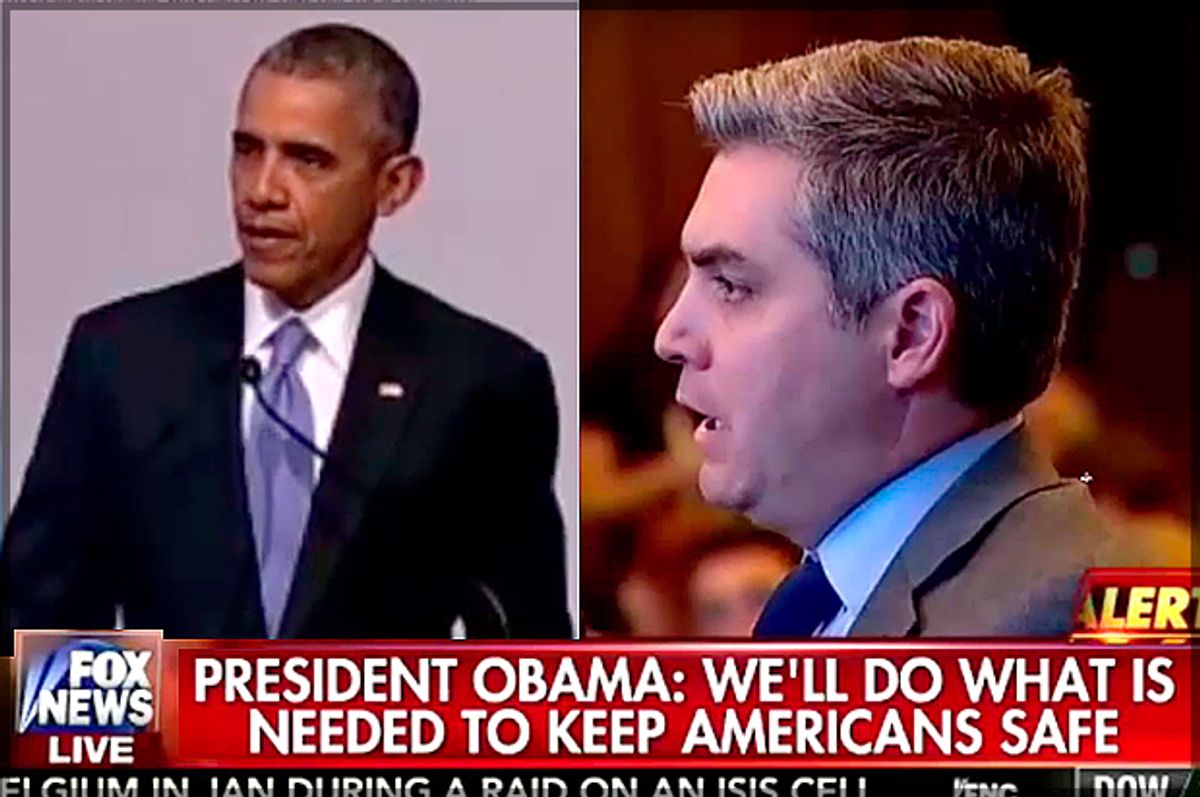 "Why can't we take out these bastards?" CNN's Jim Acosta asked President Obama at a press conference on Monday.

Acosta's language may have been rougher than some might have used, but he was speaking for a press corps whose thirst for an apocalyptic confrontation with ISIS has been let loose by last Friday's attacks in Paris.

Ever since that terrible day, much of the establishment media has eagerly reverted to its default position when it comes to foreign policy: the more hawkish, the better.

The Sunday shows were dominated by such talk. NYPD commissioner Bill Bratton turned up on both CBS and ABC's Sundayshows, warning darkly that if spy agencies couldn't monitor cell phone communications, ISIS might be able to attack New York more easily. Unsurprisingly, he was met with little skepticism. ABC viewers were then treated to the sight of Bill Kristol, a pundit who  would invade his local grocery store if he had a problem with it, calling for 50,000 American troops to combat ISIS.

On Monday morning, subscribers to Politico's highly influential Playbook newsletter were greeted with Mike Allen's pronouncement that the best person to listen to about Paris was former deputy CIA chief Mike Morell, now on the CBS payroll. If they turned on Allen's favorite show, MSNBC's "Morning Joe," they could have seen Joe Scarborough ask James Stavridis, the former Supreme Allied Commander of NATO, if NATO should go to war with ISIS. Surprise! Stavridis thought that was a great idea.

It's not just American media, either. British viewers watching Sky News on Sunday were treated to one of the more blatantly warmongering interviews you are likely to find anywhere, as anchor Dermot Murnaghan demanded that Diane Abbott, a left-wing member of the opposition Labour party, sign up to British bombing in Syria. "Even if it's just a gesture, why not join?" he asked—a stunningly casual way to discuss deadly military action—adding later that any strategy to combat ISIS should involve "trying to kill as many of them as you possibly can."

Listen to the language being used here. "Kill as many of them as you possibly can." "Take out these bastards." This is the hyper-macho language of some two-bit action movie, not a foreign policy strategy. It's also evidence of the way that a supposedly "objective" press can reinforce one very narrow view of the world through its own ideological insularity.

It has been said many times before, but it's worth saying again: what do these people think has been going on all this time? Despite the current narrative that paints Obama as some pacifist hippie, the US is currently conducting military operations in Iraq, Afghanistan, Syria, Libya, Yemen, Pakistan, Somalia and god knows where else. We have been in Afghanistan for 14 years. We have been in Iraq for 12 years. What has any of this gotten us? For one, it got us ISIS. It should hardly be controversial to say that the rise of ISIS is directly connected to the American-led destabilization of the Middle East. It didn't even exist a few years ago. Does Jim Acosta seriously believe that more of the same would stamp it out?

It now appears that the overwhelming majority of the people involved in the Paris attacks were Europeans, people whose relative luxury and safety in the world were nevertheless overwhelmed by intellectual and ideological forces whose complexity far outmatches the force of any weapon. Does Bill Kristol think we should pulverize Belgium back to the Stone Age?

It takes ideas and emotions of immense and terrible power to convince someone that they should murder people in a concert hall one by one, or blow themselves up outside a stadium. How many bombs, how many guns, how many troops, how many Orwellian tactics do the hawks now crying out for "something to be done" think will be useful in fighting that ideology, when decades of war has helped to fuel it?

It is a real tragedy that, rather than attempt to grapple with any of this, so many in the elite media beat the same drums we always seem to hear at times of crisis. We are in desperate need of new ways to think about this fragile world of ours. Instead, we get "take out these bastards." Some things never change.