Following last week's horrific attack, those in power have reverted to the same old self-destructive thinking 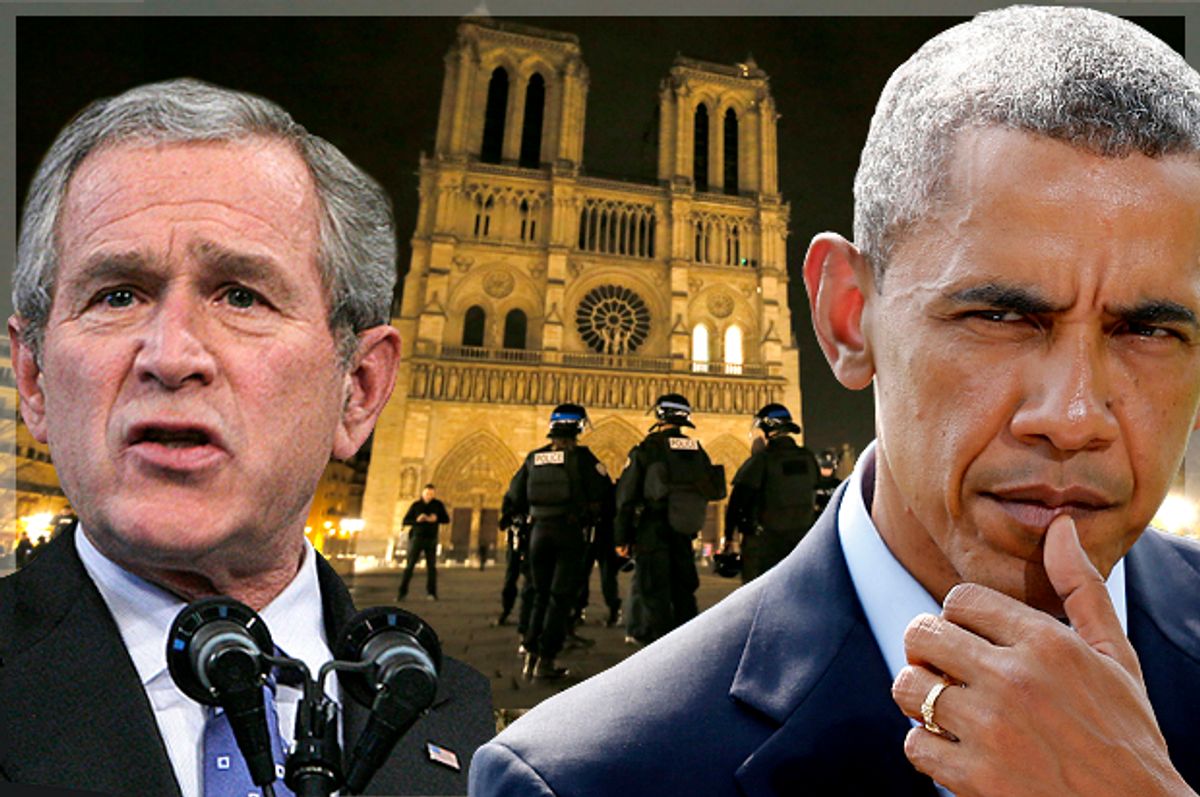 Last Friday’s massacre in Paris, which followed hard on the heels of similar outrages in Baghdad, Beirut and over the Sinai, is an unmistakable sign that ISIS has now embraced the Al-Qaeda tactic of spectacular mass-casualty acts of terror. The movement’s acolytes have, in just 36 hours, murdered hundreds of people of all faiths and creeds on three continents.

As grotesque as these acts of terrorism have been, they are guided by a political logic: ISIS is looking to swell its ranks and funds by appealing to the most nihilistic impulses of thousands of young people vulnerable to its extreme ideology, and also to sharpen those divisions in the societies it targets that best serve its goals. In Iraq and Lebanon, ISIS seeks to re-kindle civil war between Sunni and Shia; in Paris its strategic goal is to turn European societies against their Muslim minorities — both dynamics from which experience has taught the extremists that they can profit.

Each new terrorist attack reminds us of the total failure of the War on Terror. After 14 years of disaster, the policies enacted by the Western powers should be thoroughly and drastically re-examined before digging us all deeper into the quagmire of endless violence.

How many terrorist attacks do we need to suffer through before citizens start demanding a radical shift of strategy? And how long before their leaders stop falling into the Islamic extremists' traps?

Rethinking the war-on-terror approach requires developing a new paradigm that takes into account the collapse of the postcolonial world order. Every Middle East model of governance backed by an ideology has failed spectacularly, from Pan Arabism to Baathisim, simply because they weren't able to offer a life of dignity to millions of Muslims. Yet, today, Western powers continue to bet on the bankrupt model of the authoritarian strongman such as Egypt’s President Sisi, accompanied by a fixation on militarized answers to the problem of terrorism. Shockingly, Western leaders seem to be coming around to accepting the Israeli vision of living in a permanent state of war.

Massive invasions of Iraq and Afghanistan, the bombardment of Pakistan, Afghanistan, Somalia, Yemen, Libya, Iraq, and Syria, years of operations that have killed senior Qaeda figures like bin Laden, Zarqawi, and Ayman Al-Awlaki — and even mid-level boasters like ‘Jihadi John’ — have done little to degrade ISIS, let alone destroy it.

Whether we live in Western or Arab capitals, the War on Terror has only escalated the risks to our security. Western news agencies may dutifully parrot official accounts of senior jihadists killed in airstrikes, but they rarely investigate the cost in civilian casualties among those unlucky enough to have the terrorists darken their doorsteps. Yet those casualties, callously branded “collateral damage” in U.S. military parlance, continue to boost recruitment and support for ISIS and likeminded groups.

In Western societies, the impulse to tighten security by putting entire Muslim communities under suspicion and subjecting them to greater surveillance, racial profiling and harassment is often self-defeating, since it alienates the very young people in those communities most vulnerable to radicalization — and whose cooperation is vital in isolating and neutralizing real threats. The Paris massacres are likely to increase such security measures, and a political drift to the right that embraces Islamophobic and anti-immigrant rhetoric — and serves the terrorists’ goal of driving a wedge between European states and their Muslim citizenry.

Anyone who seeks safety in Paris or New York, Beirut or Baghdad, ought to be asking why it is that after more than a decade of “war on terror,” in which hundreds of thousands have been killed, millions displaced and trillions squandered, the enemy still seems to have the momentum.

The fact that European cities can be attacked by jihadists known to the authorities is too easily dismissed as an intelligence failure; the grim reality is that there are far too many young men and women in European cities who are embracing ISIS and its extreme worldview for the security services to keep track of. Instead, they are forced to devote their finite resources to those they judge are most ready to act — always an inexact science.

The military approach to countering ISIS and Al-Qaeda has plainly failed, not least because it has offered no alternative vision capable of integrating the 300 million Muslims in the Middle East and millions more around the world who identify with the suffering of their fellow Muslims.

ISIS’ myth about rebuilding a Khilafa, or Islamic Caliphate, sounds absurd to many in the West, but it appeals to the desire among many Arabs, both conservatives and liberals, for a sense of unity of the faithful in response to humiliation. Alienated by a lack of opportunity in their own societies, young European Muslims empathize with the suffering of Arabs in Palestine, Syria, Iraq and elsewhere in the Middle East — with European governments either indifferent, or actively supporting those inflicting it.

As Baruch Spinoza beautifully put it, to check passion, you have to find a stronger passion. To win against ISIS, it’s essential to offer a third way beyond terror and tyranny, a new paradigm similar to the the one that guided Europe’s reconstruction after World War II.

The Arab Spring’s demand for dignity, freedom, and justice has been bathed in blood, with Western powers once again backing the tyrants who bludgeon their own people while insisting they’re the only alternative to terrorism.

It’s not hard to see how ISIS has made a mockery of U.S.-led efforts to counter it. For many Arab states in the “coalition”, fighting ISIS is simply not the top priority. For Turkey, ISIS is a secondary issue in the face of countering the Kurdish separatists of the PKK. Much like Israel, Saudi Arabia and the United Arab Emirates view Shia Arabs, Houthis in Yemen and Iran as a more important threat than ISIS. Egypt treats the non-violent Muslim Brotherhood and critics of the regime as more threatening than ISIS. Indeed, key partners in the coalition are more determined to shatter the forces on the front lines in the fight against ISIS.

(The Muslim world was not always so divided. In 1818, the Othman empire army, led by an Egyptian leader named Muhammad Ali, crushed the effort to establish the first Wahhabi Salafi state. Muslim unity was a crucial factor in their victory.)

In search of a vision to neutralize the ISIS threat, European governments may be exacerbating the problem, but their very European Union hints at the solution. After hundreds of years of conflict, first among kingdoms and then among nation states, millions of Europeans are part of a single system and identity. Even now, despite their differences and difficulties on everything from fiscal policy to accommodating refugees, European powers accept the need to negotiate and compromise with one another based on principles of respect and equality. Now, their challenge is to live up to their common values in the way that they integrate the Muslim minorities on which the continent’s demographic future increasingly depends.

The EU can also serve as a model for the Muslim world, both in terms of its economic integration and its social contract. Countering ISIS requires that those it tries to recruit see an alternative, a new model that grants them dignity, opportunity and participation.

Short-sighted policies, such as backing dictators in the name of authoritarian stability, electing Islamophobic governments in the West, cracking down on European Muslims and dropping bombs on Arab towns simply reinforces the ISIS narrative that the West is at war with all Muslims. That path guarantees that the Paris attack will hardly be the last.