Bill Maher tangles with Stephen Colbert: The "Late Show" host brings out the best and worst sides of his complicated guest

Colbert somehow makes Maher seem more likable, without defanging him — can they get a standing TV date? 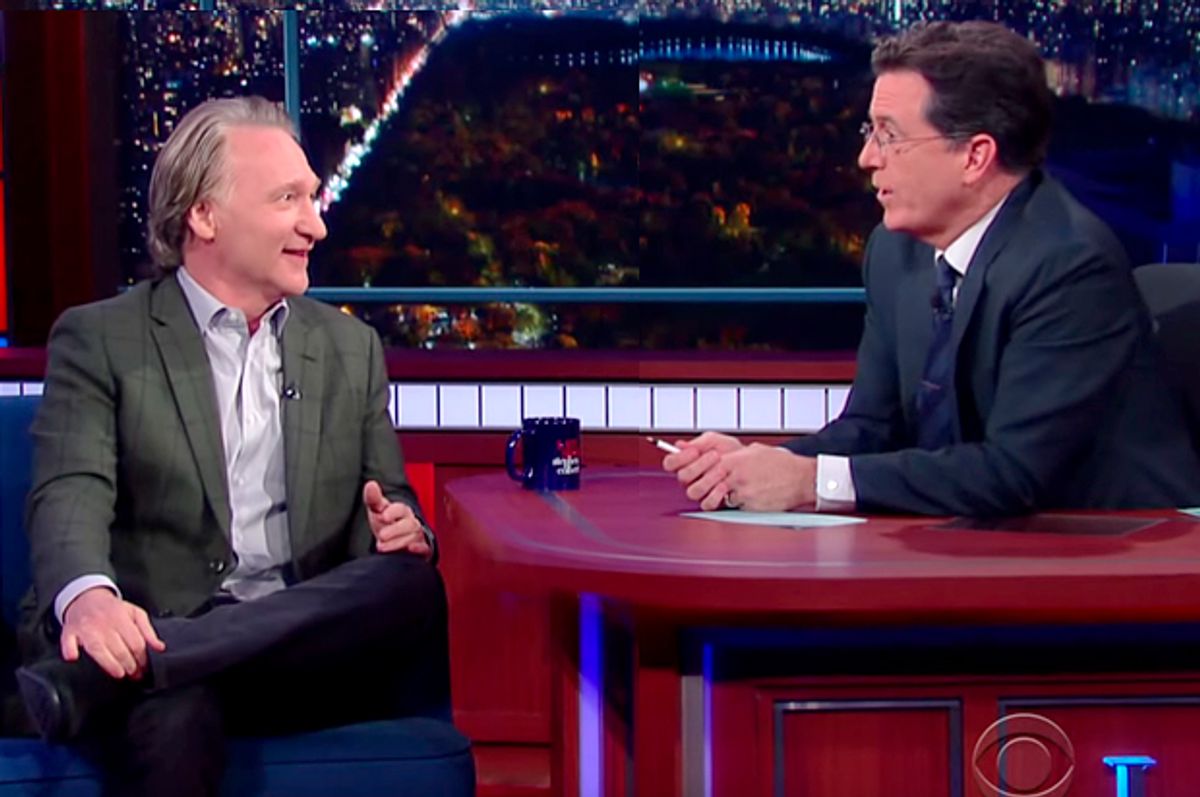 Bill Maher is a complicated guy: Smart, funny, articulate, and smug as all hell, he veers between being truly engaging and deeply self-satisfied. His comments about religion offend even many of his fellow atheists, and the nastiness of some of his lines – from the still-shocking 2001 comments comparing mentally disabled children to dogs to calling the United States “a stupid country with stupid people who don’t pay attention” -- make even those who more or less share his political persuasion cringe.

Maher showed up on “The Late Show With Stephen Colbert” Monday night, and audiences got the best and worst of him.

“We’re very opposite,” he said to Colbert. He was talking about the fact that his host is married and a practicing Catholic, but more generally, truer words have never been spoken. Maher’s utter certainty contrasted severely with Colbert’s warmth, openness, and occasional goofiness.

Maher’s appearance comes, of course, a few days after the ISIS attacks on Paris: The conversation seemed like a perfect opportunity for him to unleash invective against either Muslims or the Republican politicians who are connecting one of the world’s most diverse faiths to ruthless and inevitable violence. (The audience was ready for it: Maher’s mere mention of the Grand Old Party evoked audience laughter, as if they were waiting for Maher to start swinging.)

But Maher, somehow, refused the bait, and instead criticized politicians who talk about “wiping them out.” After dismissing Ted Cruz as “a chickenhawk with a law degree” – which is not far off -- he mostly moved away from insult humor. You can’t wipe people off the map, he said. “What you can do is wipe out the idea… We have to change those ideas: Women as second-class citizens, gay people don’t deserve to be alive….” Maher can be so dismissive, that just saying 20, 30, or 40 percent of Muslims needed to have their thinking expanded counted as almost reasonable. He could have gone for the red meat, but backed away from what could have been an insulting rant.

Smug Maher returned after the station break, though: When discussing the difference between his own religious views and Colbert’s, he patronized his host pretty roundly. Colbert described the roots of his Catholicism as coming from knowing that “there are things greater than you in the universe, that you do not understand,” even offering a brief, lucid description of Pascal’s wager.

Maher responded with his customary condescension, describing religion as “silly stories” and Christianity as “intellectually embarrassing myths from the Bronze Age.” But after a few more jabs, calling Colbert’s description of his faith “a lecture,” he backed away. If this was a skirmish, Colbert won. (I say this as someone whose stance on religious is closer to Maher’s than Colbert’s.)

On politics, Maher was funny: His portrayal of Ben Carson as “somehow a brain surgeon and a head case” is, at this point, hard to deny. Donald Trump has been so rude for so long now that Maher’s description of his worldview – “me build wall, me great” – also seems fair. But Maher characterizing Americans as “slow and dim and dumb and may need extra time” when speaking to the importance of a long election cycle is more obnoxious nonsense.

The interview closed with the two talking about Trump. Maher is dubious on Trump’s chances; Colbert is not so sure, predicting the mogul’s wins in Iowa, New Hampshire and South Carolina. Maher playfully likened the Republican electorate’s relationship to the honeymoon period in a relationship.

“I don’t know what we’re gonna do with this interview, but I’ve really enjoyed it,” Colbert concluded.

Overall, the exchange was lively and winning, and it was highlighted by Colbert’s combination of geniality and great timing. Maher is probably easy to interview – you just throw something out and he bites. But somehow, Colbert managed to tame Maher without entirely defanging him: It made for excellent chemistry between the two and a smart, eminently watchable few minutes of television.