An estimated 1.2 million Americans are living with HIV—and Sheen could help break down powerful stigmas that linger 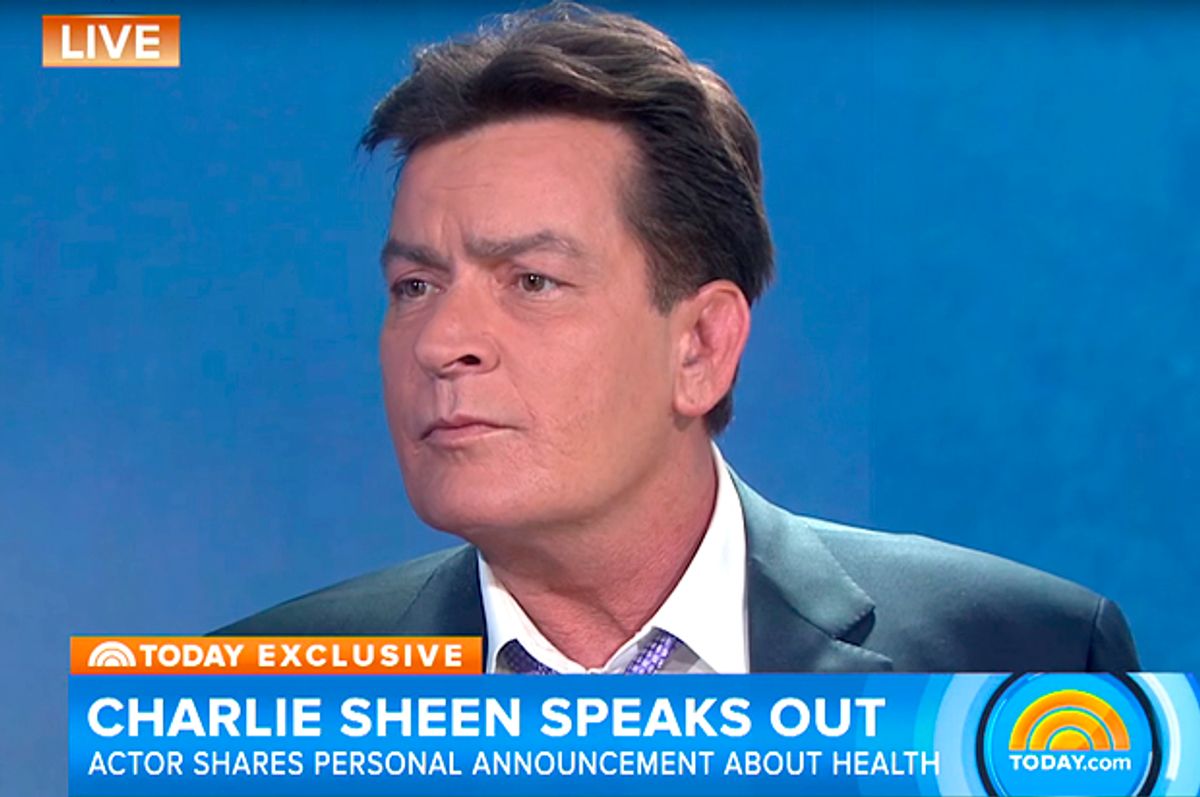 Before I even knew who Rock Hudson was, I knew his death was something to laugh at.

When I was nine, I was sipping a bottle of Sprite in the car with my mother, who is well-known for “truth-telling,” the blue-collar version of saying exactly what pops into your head at any moment. We were on our way back from the grocery store, listening to the radio, and she told me a joke, seemingly out of nowhere: “Did you know Rock Hudson didn’t die of AIDS?” I answered no—because I had know idea who she was talking about. Maybe he was a friend of hers. “He choked on a bad weenie!” she exclaimed. I bet she barely remembers this day, but I can’t forget it: the way her hair looked in the breeze and how she started humming along with the radio as if nothing was different.

I couldn’t help but think of that moment after Charlie Sheen’s Today show interview with Matt Lauer—in which the 50-year-old came out about living with HIV. Following a National Enquirer story on the subject, Sheen told Lauer: “I’m here to admit I am, in fact, HIV-positive. … It’s a hard three letters to absorb. It’s a turning point in one’s life.” The former "Two and a Half Men" actor, whose public breakdown in 2011 became a national sensation, detailed the blackmail and abuse he’d faced from friends, colleagues, and lovers who had used his status to extort him. By coming out, Sheen was setting himself free.

No matter your opinion of the always controversial actor, what he’s doing isn’t just good for his finances—it’s an incredibly brave thing to do in a culture that too often tells that people deserve to be shamed and ridiculed for contracting HIV. The reactions yesterday, when TMZ initially reported that Sheen would go public, showed as much — social media users making “tigerblood” jokes to mock his pain. Just as celebrities like Michael J. Fox and Sarah Silverman have helped start conversations about Parkinson’s Disease and depression by living honestly in the public eye, it’s important for as many people as possible—famous or not—to come out and help destigmatize HIV.

While we’ve made tremendous progress since the 1980s, what was once referred to as the HIV epidemic is far from over. An estimated 1.2 million Americans are living with HIV—according to estimates from the Centers for Disease Control—and many of those afflicted either don’t know their status (an estimated 1 in 8) or don’t disclose it to their partner. This is both due to the lack of education around the disease and the enduring stigma around the issue. Such shame will likely keep people from getting tested or seeking life-saving preventative measures that could help stop the spread of HIV—like Pre-Exposure Prophylaxis (popularly known as PrEP).

This shame is particularly pervasive and toxic in the communities that are most affected by HIV. Despite the incredible effectiveness of PrEP in clinical trials—reducing the risk of HIV infection by up to 90 percent—one of the biggest obstacles to the drug’s widespread adoption among gay HIV patients is resistance in the LGBT community itself. Marketed under the name of Truvada, Michael Weinstein once referred to the little blue pill as a “party drug,” and critics coined the phrase “Truvada Whore” to suggest that taking PrEP correlates with promiscuity.

The shame and blame associated with HIV kills—and until recently, that stigma used to be written into official U.S. policy. Before it was repealed in 2009 by President Barack Obama, the United States enforced an “almost blanket ban on people with HIV entering the country,” according to the Guardian’s Nicholas Watt. And in 2014, British politician Nigel Farage suggested that the United Kingdom should take up the policy America abandoned. When Newsweek Europe asked Farage which populations he felt should be able to migrate to Britain, he responded: “People who do not have HIV, to be frank. That’s a good start.”

Combating that stigma both in our government and our people means living honestly ourselves—and encouraging others to do the same. Users of gay hookup apps like Scruff and Grindr commonly include plus signs in their profile names, both as a way of disclosing their status and being visible to the greater community. Currently, 24 U.S. states have laws on the books which state that those aware of their HIV status must inform their sexual partners, but that still doesn’t make coming out any easier. By being honest online, it shows many HIV positive people that it’s OK to be open in real life.

Not everyone has the ability to come out—because they fear being ostracized from their family or even violence in their community—but those who can should. Before Charlie Sheen’s confession, Magic Johnson was a perfect indicator why: A beloved basketball icon, Johnson helped normalize living with the disease for millions of Americans who associated it with a death sentence. During his 1991 retirement announcement, Johnson vowed to become an advocate for raising awareness about the disease: “We sometimes think only gay people can get it or that it's not going to happen to me. And here I am saying that it can happen to anybody, even me, Magic Johnson.”

Other straight and gay celebrities—like former Olympic diver Greg Louganis, "Who’s the Boss?" child star Danny Pintauro, and Erasure lead singer Andy Bell—have likewise opened up about their own struggles with HIV in powerful ways. Today, in the wake of Sheen’s announcement, Pintauro said, “HIV is the new closet” when encouraging others to have the courage to come out as positive. And in an op-ed for the Advocate, Mondo Guerra, the winner of "Project Runway All-Stars," argued that coming out to others is important, but the greater journey is self-acceptance: “The most important conversation I can have is with myself. I have routine check-ins with myself and, of course, my doctor, the very first person with whom I ever had this important conversation.”

Charlie Sheen might not be the advocate you asked for, but that doesn’t mean he can’t help provide a valuable service to everyone living with HIV (and their loved ones) by broadcasting his own process of coming to terms with his disease. In doing so, he might teach us that someone’s life—or death—is no laughing matter.