Cowardly governors give ISIS a propaganda victory: Refusing refugees is a moral outrage & a strategic blunder

By declaring their states closed to refugees, governors are engaging in flat-out fearmongering 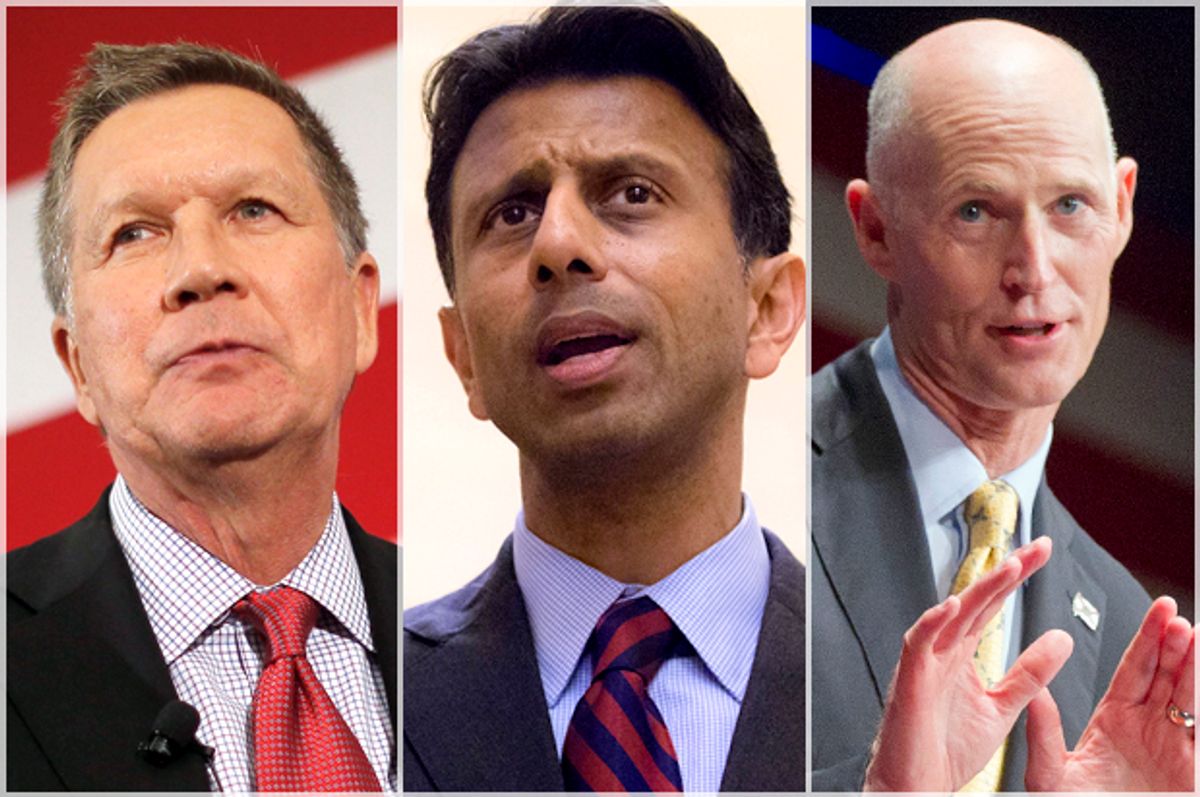 What a nice change for America, to see the South rising up to keep brown-skinned people out instead of in.

As I write this, a mounting list of governors are declaring their states closed to Syrian refugees. Many are the usual Southern suspects; they also have been joined by the likes of Rick Snyder of Michigan, a Republican elected in the Tea Party wave of 2010; Ohio Gov. John Kasich, ostensibly the embodiment of sane Republicanism in the 2016 presidential field; Republican Charlie Baker of Massachusetts; and Democrat Maggie Hassan of New Hampshire, who's vying for the U.S. Senate seat currently held by Republican Kelly Ayotte.

The governors have made these declarations not because they are overwhelmed by the refugee influx and find resources stretched to the limit. We know this because they are not even bothering to use the resources excuse as a fig leaf for the real reason, which is flat-out fearmongering in the wake of the attacks in Paris.

No, these governors’ objections to the Obama administration’s resettlement plans revolve around the belief that Syrian refugees, the majority of whom are Muslim, have not been properly “vetted.” (Just like Obama!) So some of them could be ISIS operatives trying to sneak into America to launch terrorist attacks and weaken the country. (Also just like Obama!) And Lord knows this country cannot make it easy for angry, alienated young men to get their hands on guns and launch shooting sprees that kill large numbers of people. That would be un-American.

There are several points to make here in response to this burst of xenophobia. The first is that, so far, most of the plotters and attackers involved in the Paris slaughter were Muslims of French and Belgium origin. So while Europe has struggled to manage the enormous influx of migrants from the Middle East in recent years, the foot soldiers who planned and carried out this attack with one known exception do not appear to have come from among them. Which suggests that whatever radicalization they underwent has deeper roots in the societies of France and Belgium, where most of them lived. So unless we’re prepared to stop anyone with a passport from a European country from coming here, we should really take a deep breath.

Oh sure, governors can complain about the ideology that might reach our shores through radical sleeper agents, but unless they also plan to shut off the Internet and burn every book ever written on the subject, just for starters, anyone in America already has access to information about it.

The second point is that, as Ian Millhiser explains here, these governors do not have the legal authority to refuse the federal government’s resettlement efforts. They can refuse to offer any of their own resources to help out, which will make the resettlement more difficult. But in terms of policies about refugees, the president has broad discretion in this manner. Though I don’t think Bobby Jindal need worry. Obama is a rational man who will likely determine that as far as living under Jindal’s incompetent rule in Louisiana is concerned, the Syrian refugees have suffered enough.

A third point is that this panic about letting in a fifth column of sleeper agents from a wartime enemy is pretty much as old as the country itself. Most recently it manifested in the ugly reaction to the surge of migrants we saw on our southern border last summer. I seem to recall a large wingnut freakout that ISIS terrorists might be sneaking in that way by mingling with the Central Americans fleeing poverty and violence in their own countries. (Nowhere was that panic more hilariously manifested than by right-wing websites that mistook an Adidas soccer jersey found in the Mexican desert for an Islamic prayer rug.) Granted that was only one excuse used by right-wingers to justify ugly scenes such as this, but when you reach that level of nativism, such distinctions are essentially meaningless.

The final point to make is with the statements of Ted Cruz and Jeb! Bush this weekend that as far as refugees are concerned, we should let in any Syrian Christians who apply for asylum while turning away any Muslims. This gets at the underlying xenophobic panic and hypocrisy that animates the anti-refugee movement, which paints all Christians and others as inherently good while implicating any and all Muslims as radicals secretly plotting to strap on a suicide belt and take out a mall or an NFL game. (Oh, Sen. Cruz and Gov. Bush, there is an Anders Breivik of Norway on line one…) There are millions of Muslims who have been trapped in ISIS-controlled territory but do not agree with the group’s extremist ideology, just as there are millions who lived unhappily under Taliban rule in Afghanistan, or under other fanatical regimes that they cannot escape. To turn the current refugees away out of fear of what might be is to surrender to the ugliest of our instincts. It is to give ISIS the propaganda victory it so greatly desires.

Yes, there are practical concerns about whether the government can handle a sizable migrant influx. Those concerns are driven by the grinding bureaucracy and terrible living conditions that trapped many of those who showed up on our southern border seeking asylum during last summer’s crisis. And yes, I have not yet seen a satisfactory answer to the question of whether the Gulf states can take in more than they have. But that is wholly separate from the concerns expressed by these governors. And considering that our invasion of Iraq led to the situation these refugees are now fleeing in the first place, we have a moral responsibility to help these people without drawing distinctions about which ideologies we find acceptable and which we don’t. Christian or Muslim, they all need a safe place to eat, to rest, to catch their breath.

Or, as a more concise person once said: “Aw, prairie shit. Everybody!”