Ronda Rousey's fall from grace: From America's brash sweetheart to punch line in only one knockout

Rousey has earned plenty of criticism, but schadenfreude over this specific loss has misogyny written all over it 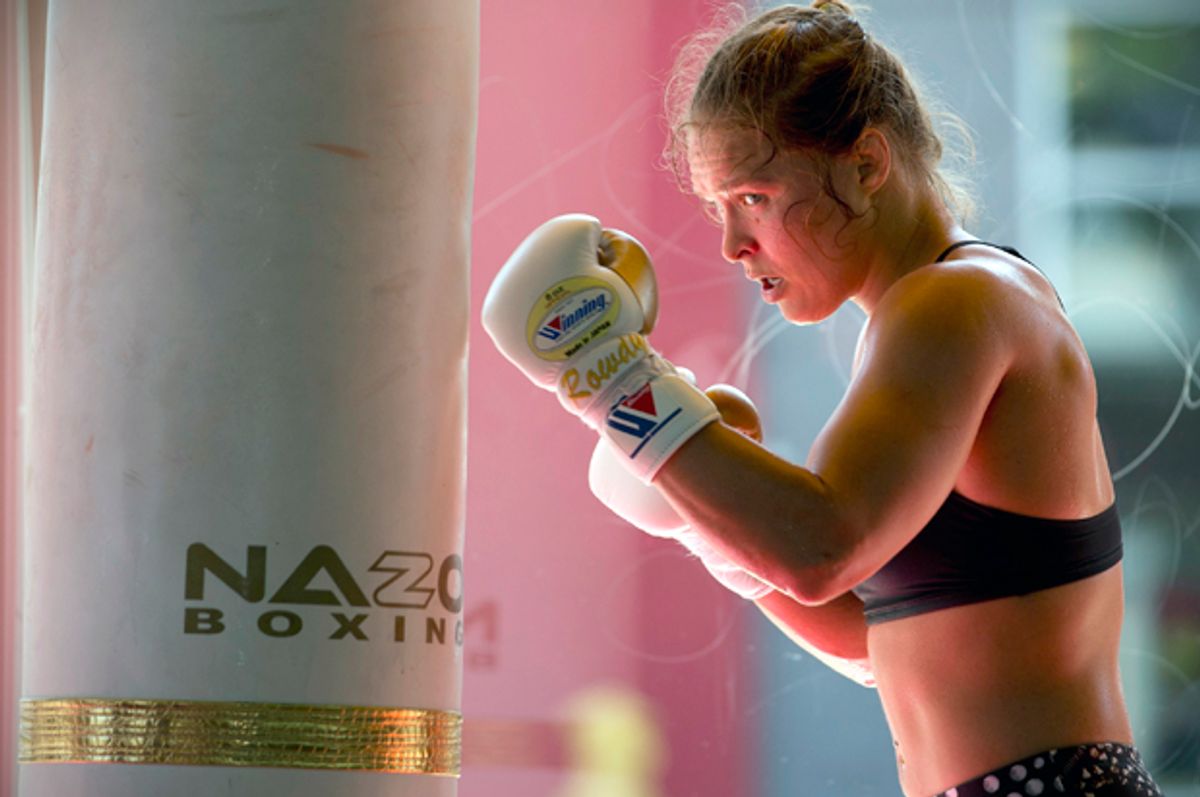 The instant before Ronda Rousey crashed into the mat unconscious, she was America’s favorite athlete. She could count Beyoncé, Chris Pratt, Dwayne “The Rock” Johnson and Shaq as part of her legions of fans. Dozens of Internet headlines declared her a role model. She even received glowing praise in the New York Times and the New Yorker – an extreme rarity for an MMA fighter. Hell, just the sight of Rousey sent children into tears of awe.

A deluge of photoshopped pictures, GIFs and Vines of the knockout burst forth from the Internet’s viral colon. 50 Cent got in on the action. The New Yorker couldn’t help picking meat off the Rousey hype train’s carcass. Trevor Noah referenced watching her "get kicked in the neck" during his "Daily Show" monologue about the Paris terror attacks last night. And, of course, TMZ resorted to its usual antics, boasting Rousey was “ashamed” of her post-fight face.

How could someone go from universally loved to universally mocked and reviled so quickly?

Appearing on the cover of boxing publication Ring Magazine only to get knocked out by former boxer Holm certainly didn’t do her any favors. It’s also possible fans suddenly became aware of Rousey’s history of troubling comments – transphobic sentiments, Sandy Hook trutherism, general hypocrisy – and actions. But I wrote about Rousey’s controversial past last month, and judging from the response and the amount of hate mail I got, few saw big problems with what Rousey had said or done. The problematic aspects of Rousey’s personality didn't spark a major backlash before her fight — although she caught plenty of flak from other writers for her Maxim sex tips gaffe — so it's unlikely they rolled into the post-fight criticism and derision.

Was the culprit her brashness? Some pundits and fellow fighters have certainly postulated so. Holm and Rousey had a brief scuffle at the UFC 193 weigh-ins. Rousey posted a hateful screed on Instagram afterward, calling Holm a “fake ass cheap shotting fake respect fake humility bitch.” But isn’t her take-no-shit attitude what made her so popular in the first place? As I wrote in October, “perhaps the mainstream media finds the narrative of an unstoppable, badass warrior woman (who happens to be conventionally attractive and white, because if she wasn’t, they’d probably be writing horrific, offensive articles about her) destroying everything in her path irresistible at a time when feminism is at the forefront of the cultural zeitgeist.”

T.D. Williams put the same sentiment a different way on the Cauldron:

It certainly helped that Rousey is a woman. She served as a perfect foil to Mayweather, a boorish and shamelessly brash self-promoter who as of late has made as many headlines for his history of domestic abuse as his pugilistic prowess. Her popularity and media platform received quite the boost as she continually put Money Mayweather in his place. In this way she was executing the will of the mainstream fan, who has a distaste for Floyd having built an empire on being unlikeable.

Rousey's gender was key to her swift rise to superstardom (the foundation of which was built on a house of playing cards and laughably inept coaching, it turns out), but perhaps it’s also the reason for the massive backlash. Rousey is outspoken and confident – traits our patriarchal society typically doesn’t value in women. Holm, on the other hand, is quiet and respectful – traits men typically desire of women in our society. In his New Yorker story on the bout, Kelefa Sanneh describes Holm as "an earnest and soft-spoken fighter who calls herself The Preacher’s Daughter." Maybe the root of the Rousey backlash is misogyny; we just can’t get enough of seeing an unapologetically powerful woman humbled by a more acceptable femininity, personified.

Either way, the mockery has gone on long enough. Athletes win and they lose; most will be both victorious and humbled throughout their careers. Even though Rousey has said and done some troubling things, she’s still a person and a professional. Yesterday, a video of the immediate post-fight aftermath leaked on YouTube, showing Rousey returning to consciousness, only to be horrified at the situation. She screamed, “No!” and then asked to “get back in there.”

This is jarring to watch, because it shows the side of combat sports we don’t often think about. Real people are fighting, and real dreams are being broken.

Ronda Rousey, despite her superwoman shtick, is a human with human vulnerabilities. Perhaps it’s best we leave her alone. Holly Holm requested as much. Even Floyd Mayweather defended her against the hordes of Internet trolls — and if Floyd Mayweather is shaming you, you know you’re doing something really wrong.