Stephen Colbert lets ISIS have it: "They’re a bunch of pussies"

"We stand with the people of France as a friend, and an ally, and offer..." Colbert said Monday. 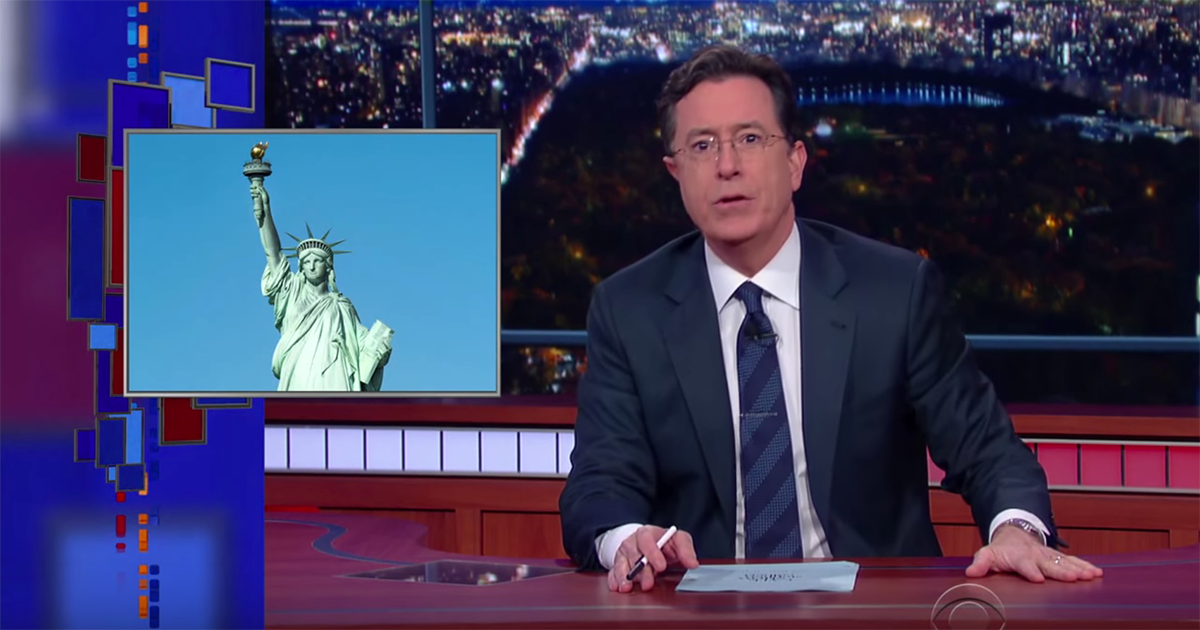 In times of crisis and sadness, we turn to our comedians to help us deal with tragedy. Whether Lorne Michaels asking then-Mayor Rudy Giuliani if "SNL" could be funny after 9/11 to Jon Stewart's powerful commentary after the death of Eric Garner, we have mourned together as a country on late-night television and let our comedians slowly lead us back to laughter.

Colbert's "visibly shaken" commentary at the close of Friday's "Late Show" was a quick way for him to express the sorrow we all felt, but Monday night he started the show with a hopeful tribute that lead to laughter.

Instead of his typical opening monologue, Colbert's audience stood as the French national anthem was played below the Colbert "stained glass" ceiling made up to reflect the French flag and Eiffel Tower.

"I wanted to start my show tonight by, once again, offering our thoughts and prayers to the people of Paris," Colbert said. "New York is a city that sadly knows too well the horror the French experienced on Friday. And we also know there are no words that can reach the depth of their grief and their shock, but we stand with the people of France as a friend, and an ally, and offer a hope that there is a way through the unspeakable tragedy."

Colbert then launched into a history lesson of the amazing alliances between the United States and France dating back to their country helping us fight for our independence against the British. "Let’s take the opportunity to thank France for what they’ve done for us,” he said. "They’ve given the United States so much over the years: Aid to General Washington in our fight for independence. Key intelligence on how to put potatoes in boiling oil. My favorite way of kissing. Half the continent at a bargain price. No take-backs, guys!" he said showing a graphic of the Louisiana Purchase. "And most of all, France gave America our enduring symbol of freedom," he said showing the Statue of Liberty.

"Because we have used that freedom to make foam versions of it for drunk people to wear on New Year’s Eve. And today, in a tribute to its mother country, Lady Liberty offered ISIS a fitting gesture," a blurred middle finger in the place of the Statue of Liberty's torch. "Long may it wave," Colbert joked.

Over the weekend, many around the world worked to show their own signs of solidarity to the French. The Sydney Opera House and Rio's Christ the Redeemer were both clad in colors of the French flag. "And the Paris Las Vegas hotel dimmed their Eiffel Tower lights," Colbert said.

Colbert claimed that no act of support was too small. “For instance, Twitter was deluged with statements of support, from the hashtag #PrayForParis to messages like, ‘In support of what is happening in Paris, my wife and I are watching Ratatouille.’ And ‘Watching Ratatouille to honor all the citizens of Paris.’ Is that wrong? No. Is Ratatouille a French film? No. Is it a valid expression? Absolutely.”

Given the attacks, Colbert said he nearly canceled one of his guests the Acro Cats, which are a group of acrobatic cats who seemed to have exactly as much trouble as you would expect in their performance.

“We asked ourselves, is tonight an appropriate time for Acro Cats?" Colbert implored. "And then we asked a bigger question: Is there ever an appropriate time for Acro Cats? No, there is not. So we said, absolutely, let’s have them on. Because I’ll tell you what, I don’t think ISIS would like Acro Cats. I don’t. They’re cute and they’re silly, two things ISIS hates. In fact, the only thing they have in common is that they’re a bunch of pussies."

And Colbert's solidarity with France:

Also, for a military reality-check, watch his interview with Medal Of Honor recipient Colonel Jack Jacobs who discussed what we can do to defeat ISIS: