The next 8 states that could legalize weed within the year

New England could be a new pot destination, as Maine, Massachusetts, Vermont and Rhode Island are all on the brink 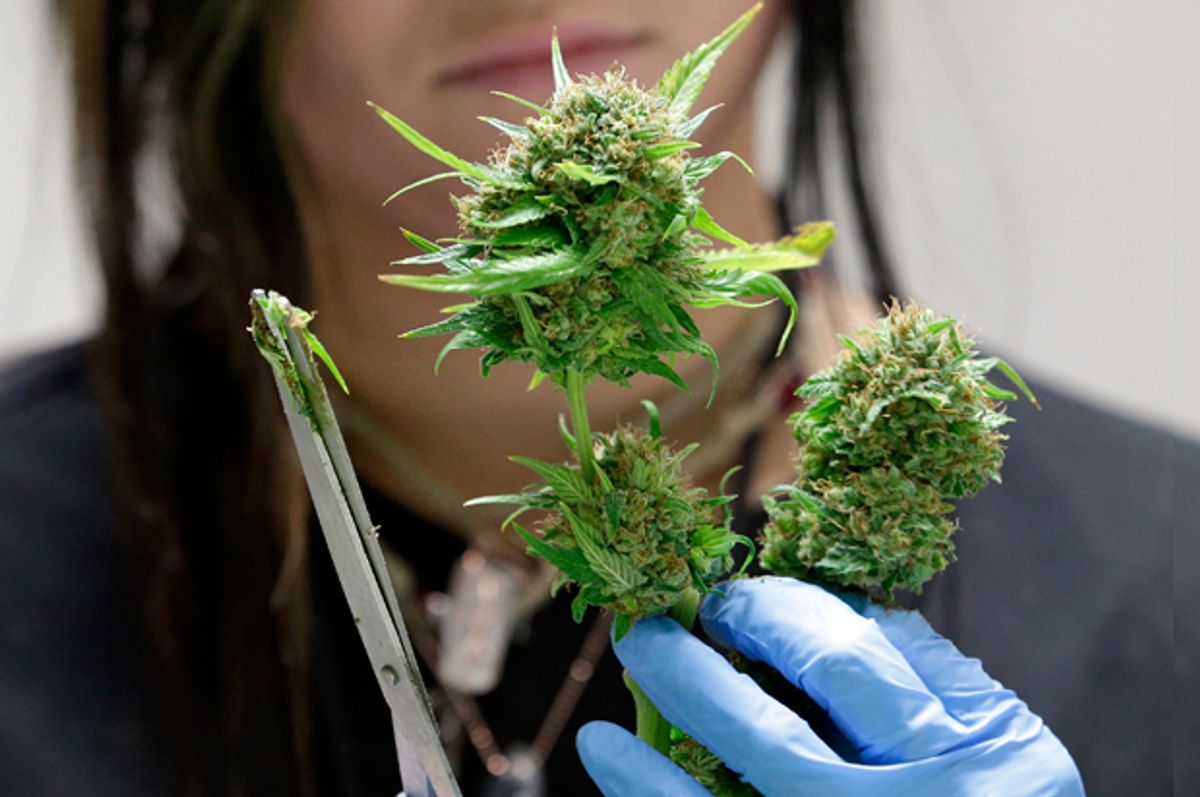 Beginning in 2012, four states and the District of Columbia have voted to legalize marijuana. By this time next year, that number could well double, and then some. National polls consistently show majorities in favor of legalization, with a recent Gallup poll showing 58% support—tied for the highest level in the poll's history.

That doesn't mean legalization is inevitable in any given state, as the case of Ohio demonstrated earlier this month. There an initiative led by non-movement investors who sought monopolistic control of commercial pot cultivation got trounced despite spending millions of dollars.

But the Ohio result was probably a fluke, a convergence of a number of factors, including tone-deaf initiative organizers, a flawed initiative, a widely criticized mascot, and the fact that it was an off-off-year election with low voter turnout. There is no reason to believe that legalization initiatives likely next year in other states will be defeated just because the Ohio effort went down in flames.

At this point, it looks like six states are likely to legalize weed through the initiative process next year, with those efforts at varying stages, and a couple more could do it through the legislative process.

Already on the Ballot

1. Nevada.The legalization initiative from the Marijuana Policy Project-backed Campaign to Regulate Marijuana Like Alcohol qualified for the ballot last December. That means by the time Election Day 2016 arrives, organizers will have had nearly two years to make their case to voters. Under state law, the legislature could have acted on the petitions and legalized weed, but it declined, so now it goes direct to the voters. There are no recent state polls on legalization, but it had 54% support in 2013 and there is no reason to think it has declined since then.

2. Arizona. The Marijuana Policy Project-backed Campaign to Legalize Marijuana Like Alcohol in Arizona announced last week that it had already collected 100,000 signatures for its legalization initiative. It needs to collect 150,000 valid signatures by next July to qualify for the ballot and appears well on the way to doing so. It says it is aiming for 230,000 raw signatures to have a healthy cushion. A June poll had support at 53%.

3. Maine. Once there were two competing initiative campaigns in the state, but now there is only one. The Marijuana Policy Project-backed Campaign to Regulate Marijuana Like Alcohol has quit signature gathering for its legalization initiative and joined forces with Legalize Maine in support of its slightly looserlegalization initiative. Both campaigns had gathered about 40,000 raw signatures each before coalescing. The Legalize Maine campaign will need 61,000 valid voter signatures to qualify, and it has until February 1 to get them.  That seems eminently doable, and if it makes the ballot, it should win; a poll in April had support for legalization at a whopping 65%.

4. Massachusetts. Unlike Maine, the Marijuana Policy Project has so far been unable to form a united front with local activists, so there are two ongoing legalization campaigns. The MPP-backed Campaign to Regulate Marijuana Like Alcohol and its legalization initiative is vying with the homegrown Bay State Repeal and its legalization initiative. As in Maine, the local initiative is slightly looser. Earlier this month, the campaign said it had already collected 100,000 signatures. It only needs 64,750 valid signatures to qualify, so it has a nice cushion and the rest of this month to gather more. It's not known how advanced the Bay State Repeal signature drive is, but it already looks like at least one legalization initiative will be on the ballot next year. Under state law, if an initiative has enough signatures, the legislature can move to enact it. If the legislature doesn't act, the campaign must gather an additional 10,800 signatures to put it before the voters. One recent poll had support for legalization at only 41%, but it had a small sample size and large margin of error. Polls from 2014 had legalization winning by anywhere from six to 13 points, and the voters previously supported medical marijuana and decriminalization initiatives with a 63% vote.

5. Michigan. Another state with two competing campaigns, and the one that looks the iffiest in terms of qualifying for the ballot. Some 252,000 valid voter signatures are needed to qualify, and neither campaign is there yet. Backed by Republican business interests, the Michigan Cannabis Coalition said it had collected 200,000 signatures for its legalization initiative by the end of October before making a "strategic decision" to temporarily suspend petitioning. It has until the end of January to come up with more. Meanwhile, state activists have created the Michigan Comprehensive Cannabis Law Reform Committee (MI Legalize) and are signature-gathering around their own legalization initiative. Last week, they said they were 90,000 signatures short; although that is just raw numbers, they will need substantially more to have a comfortable cushion, and they have until the end of December to get them. Both campaigns have money in the bank and are paying signature-gatherers.

Still In a Confused Muddle

6. California. California should be a sure thing for next year, and probably still is, but it is getting late in the game, and the evident divisions among legalization proponents are starting to make for some worried wondering. There are no fewer than 18 legalization initiatives in play (some various versions of the same initiative), most of which have little to no chance of coming up with the 365,000 signatures needed to qualify. State activists organized as the California Coalition for Cannabis Policy Reform (ReformCA) thought they had the support of national reform organizations and associated pots of money for their initiative, but that hasn't turned out to be the case. Instead, groups such as Marijuana Policy Project and Drug Policy Alliance seem to be throwing their support to an initiative sponsored by tech billionaire Sean Parker. Neither the latest version of the ReformCA initiative nor the Sean Parker initiative has been cleared for signature gathering. Both initiatives now face a ticking clock. Campaigns have six months to get those necessary signatures, but the real hard deadline is June 30. Initiatives must have been cleared for the ballot by then in order to make the November ballot. The Parker initiative will likely have the financial support to do an expedited signature-gathering campaign; whether ReformCA will remains to be seen. While the state-level polling is good—a June poll had support at a record 54%—this late disarray doesn't bode well.

7. Rhode Island. This year, the legislature took up a legalization bill only to see it held for further study by the judiciary committees in both chambers. Next year, it could actually move, and it would if the legislature listens to the voters. In an April poll, 57% said they would support a bill to tax and regulate marijuana.

8. Vermont. This is probably the best bet for the first state to legalize pot through the legislative process. The groundwork has been being laid for years, it has the support of key state political figures, including Gov. Peter Shumlin (D) and House Speaker Shap Smith (D), and legislative hearings on how—not whether—to legalize next year are already underway. The legislature failed to move legalization bills this year, but the stage is set for 2016. A September pollhas support for legalization at 56%.