This is what ISIS wants: How the right's bloodlust plays right into the terrorists' hands

The Paris attackers may have been monsters, but they were also political operators implementing a careful strategy 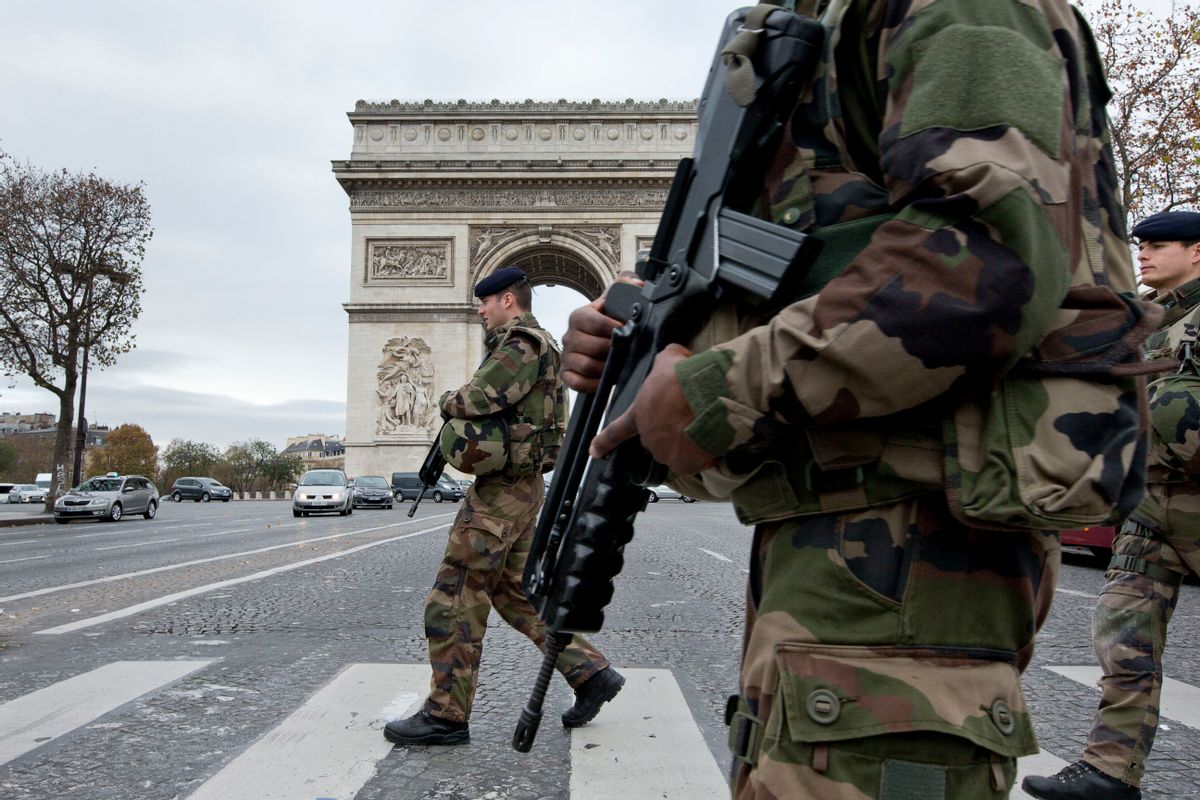 The Islamic extremists who killed over 125 Parisians on November 14 were heartless murderers, but they were also political operators implementing a carefully conceived strategy. A February 2015 article in Dabiq, the official magazine of ISIS, offers a clear window into their agenda. Published in the immediate aftermath of the Charlie Hebdo massacre, the essay was titled, "The Extinction of the Grayzone."

"The presence of the Khilafa [Islamic Caliphate] magnifies the political, social, economic, and emotional impact of any operation carried out by the mujahadin [freedom fighters] against the enraged crusaders,” Dabiq stated. “This magnified impact compels the crusaders to actively destroy the grayzone themselves, the zone in which many of the hypocrites and deviant innovators living in the West are hiding…."

Here, ISIS revealed its intention to unravel the fabric of Western civil society — what it calls the "grayzone” — by provoking governments into carrying out disproportionate military reprisals and adopting draconian security measures.

Once repression and Islamophobia in Western societies reaches sufficiently unbearable levels, the author wrote, “The Muslims in the West will quickly find themselves between one of two choices, they either apostatize and adopt the kufri [infidel] religion propagated by Bush, Obama, Blair, Cameron, Sarkozy, and Hollande in the name of Islam so as to live amongst the kuffar [infidels] without hardship, or they perform hijrah [emigrate] to the Islamic State and thereby escape persecution from the crusader governments and citizens.”

In the mind of the Dabiq author, who appeared to be among the ideological vanguard of ISIS, the West’s descent into full-blown fascism would force Muslim immigrants to flee for the sanctuary provided by the Islamic State.

To bring this scenario to fruition, IS has aimed to cultivate favorable terrain for the Western political elements most likely to incite against Muslims, campaign for repressive surveillance laws, and ultimately play out an apocalyptic clash of civilizations. Indeed, IS is doing everything in its power to propel the militarists also seeking to extinguish the grayzone.

The reactions to the Paris attacks by influential political actors across the West suggest that ISIS may have gotten exactly the result it wants. Vowing a “pitiless war,” French President Francois Hollande ordered a series of airstrikes around the ISIS-controlled city of Raqqa. To convince himself that another bombing run over the smoldering ruins of Syria would do anything to improve France’s security, Hollande clearly ignored the final words of one of the gunmen who massacred theatergoers in Paris: “Hollande should not have intervened in Syria!” But with mainstream French conservatives like Laurent Qauquiez calling for placing thousands of terror suspects in an internment camp, Hollande may have had no political space to act rationally.

Suggesting the surveillance laws rammed through parliament this year were not sweeping enough, French Interior Minister Bernard Cazeneuve proposedthe dissolution of French mosques where “hate is preached.” As Poland abruptly pulled out of the EU refugee resettlement plan, neo-fascists Geert Wilders and Marine Le Pen called for ending all immigration to Europe.

In the U.S., where Republican Michigan Gov. Rick Snyder suddenly rescinded plans to take in Syrian refugees, right-wing pundits exploited the Paris attacks to lash out at everyone from gun control advocates to college students demonstrating for racial justice. Major pro-Israel lobbying organizations andnews outlets seized the opportunity to link the massacre in Paris to Palestine solidarity activism, even though no such connection exists.

Among the most disturbing reactions to the attacks is neoconservative writer David Frum's call to “repatriate the Middle Eastern mass migration of the last two years…because unemployed and alienated 2nd generation populations are so susceptible to radicalization and violence.”

With his demand for the expulsion of millions of Muslims from Europe back to the moonscape of Syria, Frum was unwittingly agitating for the same goal ISIS outlined in Dabiq — “they will perform hijrah to the Islamic State.”

Frum has been much more than a passive observer of the rise of the Islamic State. As a speechwriter for President George W. Bush, he crafted the notorious “Axis of Evil” phrase Bush deployed in his 2002 State of the Union address to link Saddam Hussein’s Iraq to Al Qaeda. A year later, America invaded Iraq on pretenses fabricated by Frum and his neoconservative fellow travelers, transforming a formerly stable Arab state into a sectarian meat grinder and setting the stage for the rise of ISIS.

After leaving the Bush administration, Frum published An End To Evil with Richard Perle, the neoconservative former Pentagon official who pushed for regime change in Iraq. The book reads like a mirror inverse of Dabiq, arguing for the application of total violence to purge the world of evil. Frum and Perle demanded regime change in North Korea, the toppling of the Iranian regime, an invasion of Libya and the termination of the Palestinian bid for statehood. (So far, only two of their radical fantasies have been fulfilled.) On the homefront, they urged the creation of a panopticon-style surveillance regime and implementation of political criteria for denying citizenship to immigrants. The only regret the two expressed over the failed invasion of Iraq was that the disgraced con artist Ahmed Chalabi had not been installed as the country’s provisional leader.

Neither Frum nor Perle nor any of the Bush administration figures behind the war on Iraq faced any consequences for the destruction they wreaked. Instead, they have been rewarded with cushy fellowships at think tanks like the American Enterprise Institute, or been called on to advise Republican presidential candidates. Others made fortunes on reconstruction contracts, took prestigious academic posts and led international financial institutions. Frum was eventually hired as senior editor at the putatively liberal Atlantic Magazine. In March, the Atlantic published a widely read cover story glowingly portraying the criminal mafia of ISIS as an authentic embodiment of orthodox Islamic theology — exactly as it has marketed itself.

Billions of dollars have been spent and hundreds of thousands of lives lost in the global war on terror. At every step of the way, Western governments played directly into the hands of Islamic extremists, falling for their ploys and fueling their ambitions. As Osama Bin Laden tauntingly proclaimed back in 2004, “All that we have to do is to send two mujahadin to the furthest point east to raise a piece of cloth on which is written Al-Qaeda, in order to make the generals race there to cause America to suffer human, economic, and political losses without their achieving for it anything of note other than some benefits for their private companies.”

For the handful of ideologues guiding the forever war, those personal and political benefits justified the price of failure. After the latest assault on Paris, it’s not surprising to see them clamoring for more force, more surveillance, more silence from progressives and more airtime for themselves. As they occupy the political center, the grayzone fades to black.