When trolling crosses dangerous lines: This writer's selfie transformed into a terrorist portrait shows how far online abuse can go

The image was debunked early, but a new investigative report from Vice traces the act back to Gamergate supporters 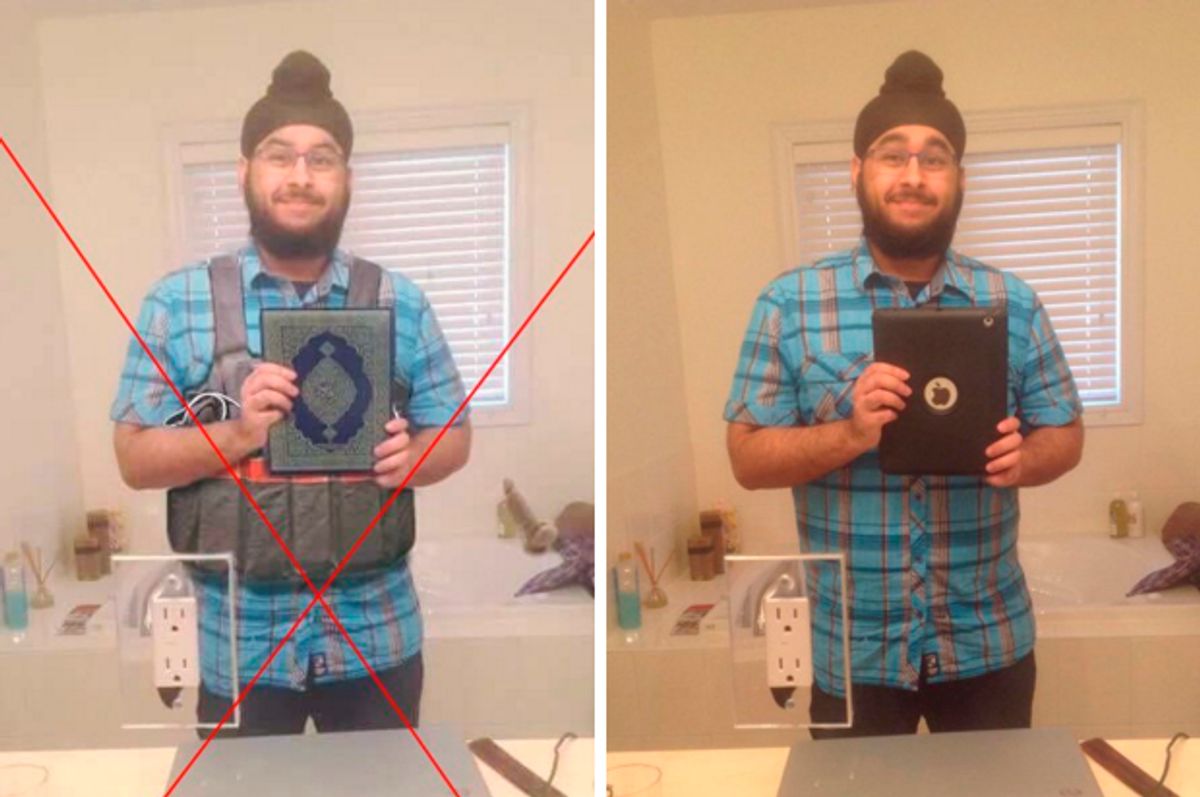 In the wake of the terrorist attacks on Paris, a photograph started to be circulated on the internet. Showing a young bearded man in a bomb vest and holding a Qur'an, the image was presented as being a selfie taken by one of the suicide bombers shortly before the attacks.

News outlets around the world swiftly picked up the image and repeated the damning caption. From La Razón in Spain (which has since retracted): "Uno de los terroristas." From Sky TG-Italy: "Ecco uno dei terroristi." However, it was not a selfie of "unnamed suicide bomber" as Sky TG/Italy affirmed, but a photoshopped image of a Canadian man named Veerender Jubbal, whose life has been turned upside down as a result of being maliciously targeted.

By whom, you may ask? What kind of people would do such a reprehensible thing? According to an investigation by Rich Stanton for Vice News, it's supporters of the group called #Gamergate — specifically, one "blacktric" and "turd_wartsniff." Both individuals have since deleted their Twitter accounts, but the internet never forgets. Stanton notes:

"Gamergate members have insisted that blacktric has no association with the group, but that is contradicted by his posting on the GG subreddit KIA*, jolly back-and-forths with Gamergate's "based lawyer" Mike Cernovich, and his history of commenting on stories about the group. Astonishingly, amongst the evidence offered by Gamergate that blacktric has no association with them is a tweet where he refers to GG as "us." (*This comment was deleted by KIA moderators after this article was published. It is archived here.)"

Those involved with the gaming world knew right away that something was awry with the image, because Jubbal is something of a minor celebrity in that subculture thanks to being a favorite target of Gamergaters. Earlier this year, he briefly quit Twitter due to the unending barrage of online harassment he'd been enduring. What had he done to be so loathed? He supported diversity in gaming while being a brown non-Christian.

True to the tenets of Sikhism, he was unfailingly polite, kind, and inoffensive in the face of sustained and widespread vilification. Writes idlediletante for Daily Kos: "His trademark response to racist insults directed at him personally was just "Gosh." When things got really heated, Jubbal released his frustration by tweeting Sailor Moon GIFs. Jubbal's calm, polite responses in the face of furious racism became so well-known amongst #gamergate opposition on Twitter that somebody designed a T-shirt to commemorate Jubbal."

But if the attacks against him are not new, the real-life implications of harassing him online have dramatically shifted. In the wake of the Paris attacks, doctoring  Jubbal's image and labeling him a terrorist is tantamount to making him the target of an international manhunt and placing his life in danger.

But Arthur Chu is also a favorite target of Gamergaters as well, and he isn't surprised at all. As Chu has repeatedly pointed out, this kind of online harassment goes far beyond shits and giggles. In response to the vicious hoax targeting Jubbal, Chu observes: "Even a small-scale social media shitstorm can easily lead to one particularly zealous person crossing the line to get a SWAT team sent to your house—or to your family’s," he notes. "The trolls who are intent on denying that games and media and Internet “bantz” should be treated as real or have real-life consequences keep pushing the envelope."  With nothing to keep this behavior in check, Chu worries that the harassment will keep on escalating until someday, someone is going to end up really hurt or even dead in real life.

Yet the fact that Chu is in the U.S., Blacktric is in Turkey, and Jubbal is in Canada, helps shed some light on the complexities of forming laws to govern online behaviors with the potential to become crimes in physical space. Online postings and interactions are not place bound in any meaningful sense of the word. Do free speech laws apply to a man in Turkey participating in an online forum hosted by an American company? Will Facebook nation have to implement its own set of laws, declaring itself a virtual geography for digitized minds without recourse to national boundaries?

As for Jubbal, he maintains an unflappably optimistic and polite stance. In response to the doctored photo, he tweeted: "Learn the difference between me being a Sikh, and a Muslim. Cry in mug, while I use your tears to water my garden. I am valuable, and rad." He added: "I am cute as gosh."