Obama clearly doesn't watch "Game of Thrones," but would relate heavily to the story of Peter Dinklage's Tyrion 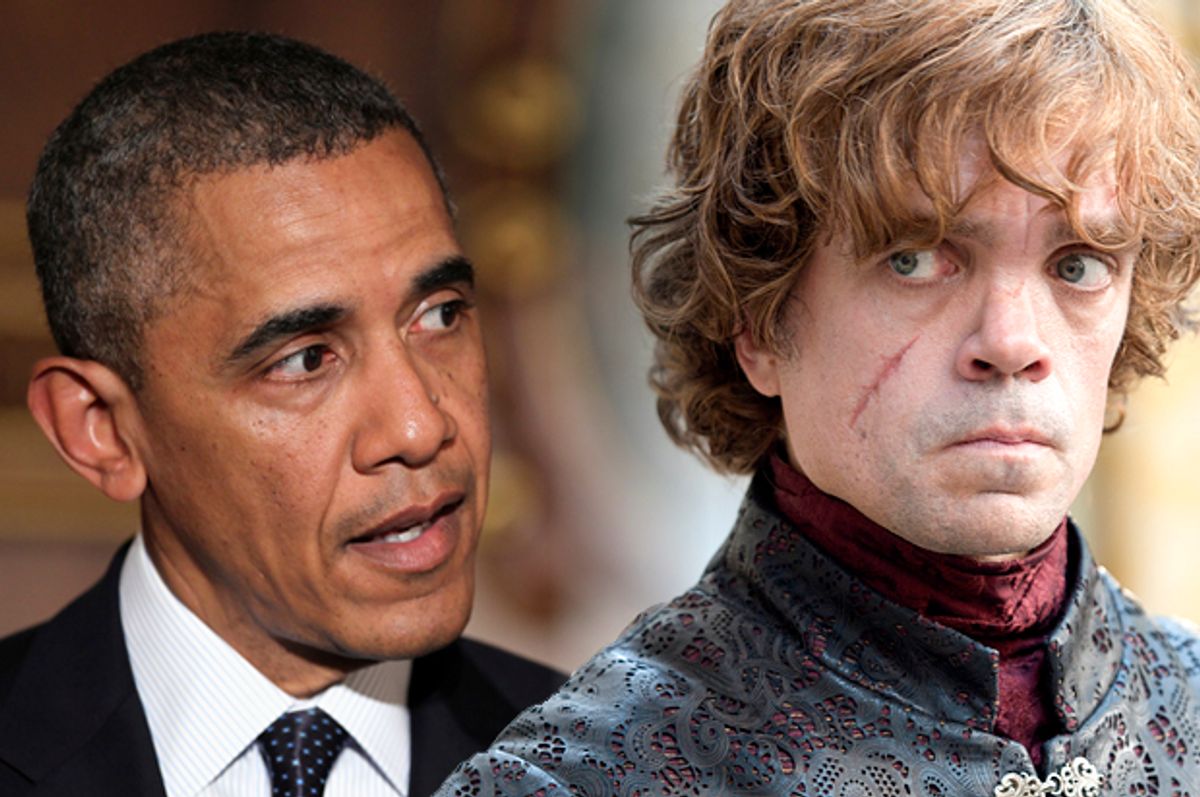 On Tuesday, GQ published an interview of President Obama conducted by Bill Simmons, who pulled a classic geek move, wedging his obsession with HBO's "Game of Thrones" into the interview, asking if Obama liked the show. Obama said he did, causing this awkward exchange:

Which character do you identify with?
My favorite character is probably…the dwarf, what’s his name?

Oh, yeah. Peter Dinklage’s character.
The problem with Game of Thrones, though, is that I don’t remember the names of any of the characters.

It takes Simmons a couple more questions to realize that Obama is probably too busy to actually watch "Game of Thrones" and only mentioned Peter Dinklage because he's the actor everyone knows is on that show. It's OK, Obama. We forgive you. Running the country is hard work that doesn't leave much time for watching the beloved HBO fantasy series, much less reading George R.R. Martin's doorstopper book series, "A Song of Ice and Fire," that it is based on.

Still, Obama will have plenty of time to lounge on a beach in Hawaii 14 months from now, and when that time comes, I would hope that he does read those books and watch that TV show, because I think he would, in fact, get a lot out of the tragic story of Tyrion Lannister, the character he was trying to pretend he watches on TV.

In the first three books of "A Song of Ice and Fire" (and four seasons of the show), Tyrion has a trajectory that might sound awfully familiar to Obama: He's a bright and charming man who is nonetheless looked down upon by people who are a lot stupider than he is because they are prejudiced against people who look like him. Despite these obstacles, Tyrion rises high in government, taking on the highest executive office in Westeros, with the title of the Hand of the King. His job as the executive is to rein in an economic crisis as well as deal with an unnecessary war, all while trying to manage a bratty king named Joffrey.

Tyrion does an excellent, if imperfect job, despite these overwhelming circumstances, helping stave off an invasion and deal with other political crises. Despite his hard work and many successes, many in the kingdom continue to hate Tyrion irrationally, calling him a "demon monkey" and blaming him for catastrophes brought on by the king, catastrophes that Tyrion has actually gone out of his way to fix. In the end, this public's desire to scapegoat him leads to Tyrion's downfall, as he is blamed for the king's murder, which he didn't commit, and has to escape unjust execution under the cover of darkness.

If you substitute "the president" for "Hand of the King,"  "the Republicans" for "King Joffrey," and "secretly born in Kenya" for "demon monkey," the parallels between Tyrion and Obama are downright startling. Like Tyrion, Obama walked into office with a military crisis and an economic disaster on his hands. Like Tyrion, his efforts to fix things get stymied at every turn by forces that oppose him for political reasons. Like Tyrion, he had a major military victory (killing Osama bin Laden) and domestic victories that prevented suffering, but many refuse to give him credit. Like Tyrion, Obama gets blamed by huge numbers of people who have preexisting prejudices about him, who would rather blame someone they irrationally hate than the truly guilty parties.

Obama's story looks like it will have a happier ending than Tyrion's. Still, the endless Benghazi hearings have echoes of Tyrion's show trial, showing that Republicans are plenty willing to go there, but just don't quite have as much power as Tyrion's enemies in the fictional land of Westeros do.

Despite these eerie parallels, we can safely agree that Martin was not thinking of the Obama presidency when he wrote the sad tale of Tyrion Lannister. The first three books of "A Song of Ice and Fire," where all these things happen, were published from 1996 to 2000, long before there was a President Obama. The fact that Martin beautifully predicted what would happen to a man in Obama's place--that he would be scapegoated and lied about so much--shows that Martin is an astute observer of human behavior, which is why his books and the HBO series based on them rise head and shoulders above most fantasy literature.

During the interview with Simmons, Obama repeatedly stresses his regret that he didn't do a better job communicating with people or bringing them together. "I would probably tell myself to communicate more effectively early on than I did," he says, when Simmons asks what he'd say, knowing what he knows now, to himself in 2008. "You can’t separate good policy from the need to bring the American people along and make sure that they know why you’re doing what you’re doing," Obama adds, a bit sadly.

It's a nice idea, this notion that you can bring stubborn people to your side with better communication or stronger leadership. It's not a complete fantasy, to be sure. There are always some people you can reach through persuasion and clear communication. Maybe there were ways that the Obama administration failed to do this, and they could have done a better job.

Still, as Tyrion Lannister could tell you, trying to explain things to people has its limits. You can be a clear communicator. You can be a prince among men. You can save a city from imminent destruction. You can do all these things and still have people out to destroy you, because it suits their own selfish purposes to do so. Tyrion is blamed for the king's murder not because there's any real evidence he did it. Instead, it's because there are people in court who see him as a threat to their power and want him gone, and blaming him for murder accomplishes that goal. And other people are willing to listen to their lies, because they simply don't like Tyrion--he's a dwarf and he's bookish and he's clever, all qualities that are disliked by many in the kingdom--and they want to believe the worst about him, so they do.

And so it was with Obama. The widespread anger and hatred over things like Obamacare and his other policies are not because people are unaware of the benefits. It's because conservatives hate him--he's black, he's urbane, he's clever, he's a Democrat, he's not a member of their tribe--and so they are eager to believe every bad thing about him and what he does. As the people of Westeros are eager to believe Tyrion is a demon who killed the king, the right is eager to believe that Obama is a secret Kenyan who is using Jade Helm to take over the country. You can't communicate with that. Information cannot dispel the desire to believe.

So while you were just bullshitting when you told Bill Simmons, "I do love Game of Thrones," President Obama, I bet, once you have real time to watch it---or better yet, to read "A Song of Ice and Fire," all 11 billionty pages of it--you will find that you love the story. That is, if you're not traumatized by how true to life this story of ice zombies and dragons and a dwarf who rises really high only to be torn down by haters really is.