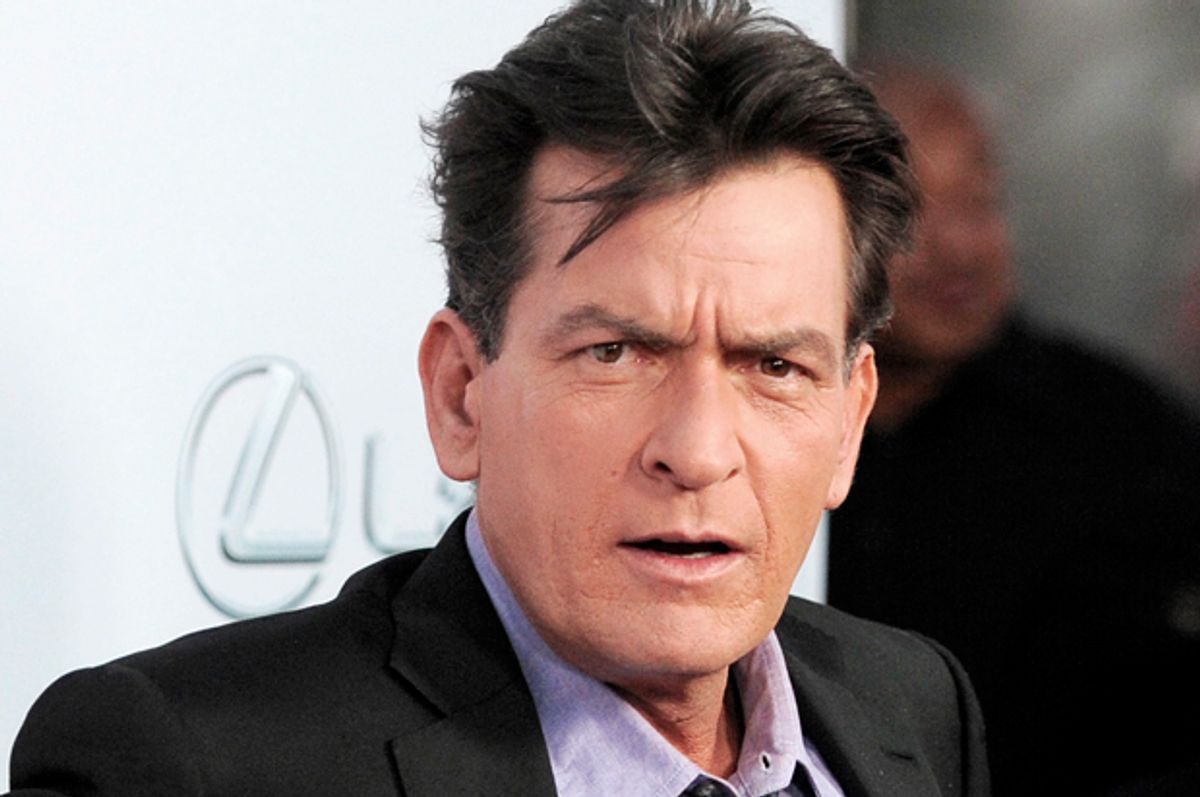 “All those years of Hookers and Drugs. I hope it was worth it.” Denise Izmerian wrote on Twitter Monday, linking to a People story regarding actor Charlie Sheen’s planned disclosure that he’s HIV positive. In 13 words, she summarized a prominent sentiment online: that, in essence, Sheen deserved to contact HIV based on his notorious behavior.

In addition to posting mocking memes, other Twitter users essentially said the same thing, using “hookers” as some sort of disdainful code for a group of people who, in these Tweeters’ views, aren’t human beings deserving of respect, but mere disease carriers. “I'm sorry, But how can anyone be surprised that ‪@charliesheen has HIV. He has slept with so many people including hookers,” wrote Cindy Thomas. Kautuk Srivastava took the opportunity to imply that it was a sex worker who infected Sheen, by Tweeting: “Charlie Sheen is HIV positive? That is probably the greatest advertisement for, 'Don't bang hookers' in the world.”

To be fair, not everyone has harped on this line of thinking. In the lead up to Charlie Sheen’s announcement yesterday morning on “Today” that he’s HIV positive, reactions on social media have been mixed, from jokes about his catchphrases “winning” and “tiger blood” to support for the actor in coming out about this health status. But while many have wished him well, this story has unearthed a level of moralizing about drugs, paying for sex and promiscuity that cannot go unchecked.

Jenelle Marie Davis, founder of website The STD Project, which offers resources for STD and STI testing and treatment, castigated early media stories for dramatizing this important topic. “We need to stop sensationalizing the upcoming news about Charlie Sheen and use this as a teachable moment to promote awareness, education, and prevention, not the latest celebrity lynch mob. Why not empower people to advocate for their health rather than scaring the daylights out of them and shaming them?”

Specifically, Davis called out a New York Daily News story for, like the Twitter users, playing up the sex worker angle. “Adult entertainers are often some of the few folks who use comprehensive safer sex practices consistently and correctly, so again, this is just plain stigmatizing and ridiculous,” Davis told Salon. Sex educator Jessica O’Reilly, PhD, went so far as to blog that the National Enquirer story “endangers public health.” Dr. Reilly wrote, “By outing those who are HIV-positive, we do nothing to protect the public (as I’m sure the National Enquirer will claim as their lofty goal); instead, we create a culture of shame and secrecy in which people are afraid to talk about sex, access sexual health services, get tested and seek treatment — all of which have the potential to reduce transmission risk.”

After his interview, some commentators took Matt Lauer to task for how he handled questioning Sheen, and the broader implications of those questions when discussing HIV. Bryan Buttler, writing at Philadelphia magazine, argued that Lauer’s “overall tone did not help with public stigma that suggests that those who contract HIV have done some sort of morally corrupt or unethical action to get the virus.” At Time, Daniel D’Addario wrote that the interview was “a stress-inducing portrait of HIV as a sentence to years’ worth of turmoil; it’s hard to imagine that this framing did anything to reduce stigma.” Blogger Ella Dawson, who often writes about herpes and STI stigma, noted the interview “felt less like an announcement and more like a trial.”

Others, without casting blame, still compound the ignorance about HIV by equating it with a death sentence, like one Twitter user who wrote, “I'm telling you now that Charlie Sheen will die from HIV, I guarantee it.” Fred Swanson, Executive Director of Gay City, a non-profit in Seattle, WA that provides HIV testing and other services, told Salon, “Like any disease, chronic illness, or infection, HIV is not a punishment for immoral behavior. With new advances in HIV detection, prevention, and treatment, we have more tools then ever before to improve the lives of people living with HIV, regardless of who they are or how they became infected. Studies have shown that for those engaged in treatment sufficient to bring their viral load to undetectable levels, it’s nearly impossible for them to transmit the virus to others."

Davis echoed this sentiment, telling Salon, “Using AIDS to describe Charlie Sheen's HIV status is dated, and it erodes all of the stigma the pioneers of the 1980's worked so hard to reduce. AIDS is an antiquated term that no longer accurately depicts the progression of HIV. Those who are undergoing treatment often live healthy, normal lifespans and die of unrelated, natural causes.”

Dr. TaMara, a clinical sexologist and certified HIV counselor who was the lead author of "HIV/AIDS: A Manual for Faith Communities," told Salon that when we make light of Sheen’s situation, we essentially add to the problems those with HIV face. “The unsympathetic and insensitive tone that exist within our society when it comes to HIV and AIDS helps to continue to create an environment where people are suffering in silence,” said Dr. TaMara. “The lack of education and fear breeds judgment and only continues to further stigmatize individuals that are infected and affected by HIV.”

Lastly, it’s 2015, yet Travis LeBlanc can still Tweet “Charlie Sheen has HIV? I didn't even know he was gay!” and have people like it. Even The National Enquirer, which broke the story that prompted Sheen’s television disclosure, got in on the act with a Tweet Tuesday stating, “HIV Positive ‪#CharlieSheen Pursued Women, Men & Transsexuals!”

Lucas Brooks, a performance artist who discusses getting tested for HIV and other sexually transmitted infections in his one-man show "Cootie Catcher," told Salon, “I've found that a lot of heterosexual people don't believe that HIV will ever have an effect on them. They use birth control as their sole form of protection, as if pregnancy is the only possible thing that could go wrong for them. While I would never wish this kind of illness on anyone, I do hope that it sparks more universal conversations about sexual health, and that people may eventually stop seeing HIV as a specifically gay issue.”

There’s no denying that Sheen has a history with violence against women I would hope most of us would find incorrigible. But it’s still possible to hate and speak out against his past behavior and actions without making blanket assumptions about his hiring of sex workers, his health or people with HIV. Like him or not, he is now one of the most famous celebrities in this country who is open about being HIV positive.

Rather than essentially gloating that he’s gotten some sort of comeuppance for his supposed vices, we should be using the draw of his celebrity status to assist others who may be grappling with their own HIV status. Let’s start listening to the voices of others who are HIV positive, whose stories will surely illuminate a wider range of experiences than Sheen’s, such as blogger and vlogger Justin B. Terry-Smith, who posted a sympathetic to Sheen video on YouTube Tuesday, or those on the Poz 100 list, compiled by Poz magazine, which this year honors “long-term survivors” who were diagnosed with HIV in 1995 or earlier.