Ted Cruz's refugee McCarthyism: Why his bigoted crusade is so dangerous

Joined even by "moderate" Republicans like Jeb Bush, Ted Cruz calls for discrimination of the ugliest order 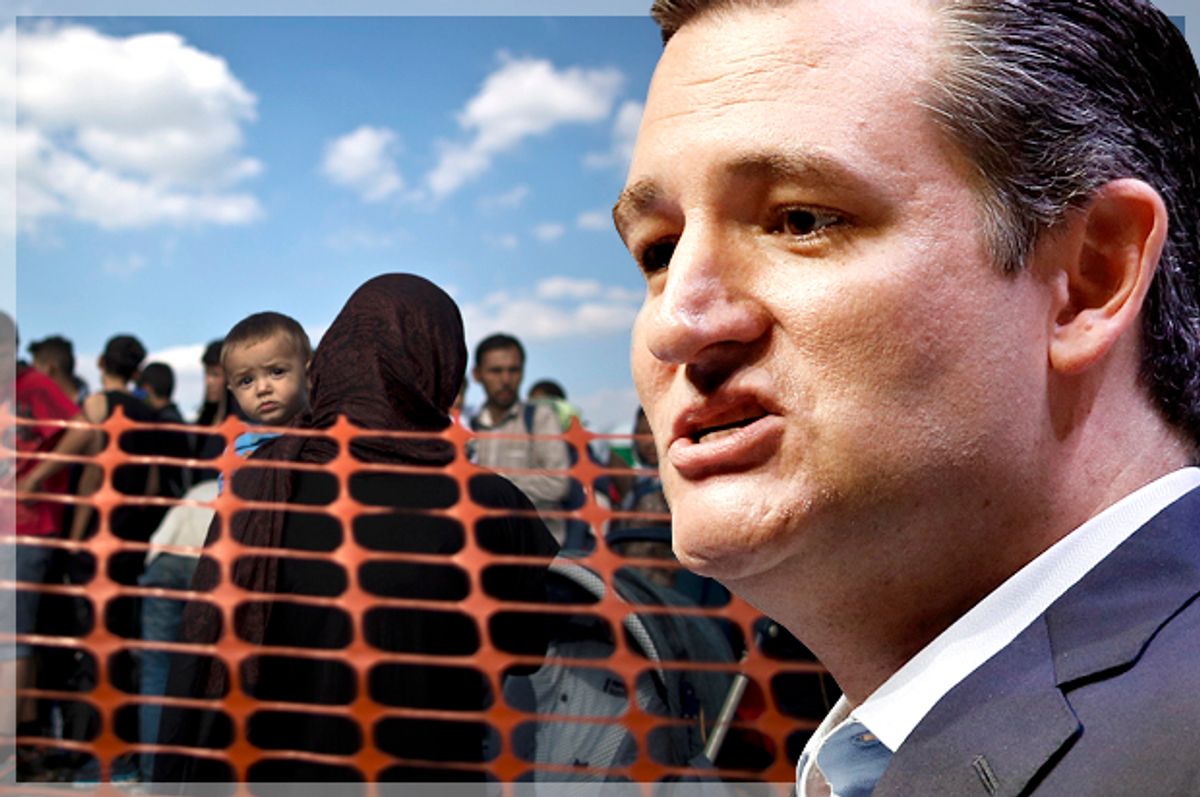 The attacks in Paris have given religious demagogues on the right a unique opportunity to whip up anti-Muslim hysteria. According to reports, a Syrian passport (later found to be fake) was found outside the State de France, where Friday’s assault occurred. Greek authorities have confirmed that a man traveling under the same name as the passport entered Greece via the island of Leros. The fingerprints taken at the time match those of one of the Parisian suicide bombers.

At least 27 governors have already declared that they would not allow Syrian refugees to enter their states. The governors have no legal ground to do so, of course, but that’s not really the point. Such proclamations are intended to score symbolic points, not to solve any actual problems.

The GOP presidential candidates, particularly Jeb Bush and Ted Cruz, have taken it a step further. Jeb Bush wants to deny aid to all immigrants save for the Christians. “We should focus our efforts as it relates to refugees on the Christians that are being slaughtered,” he told CNN’s “State of the Union.” As for the thousands of innocent Muslims fleeing death and destitution, well, that’s someone else’s problem.

Ted Cruz was even more strident (and unhelpful) in his response. “We can’t roll the dice with the safety of Americans and bring in people for whom there is an unacceptable risk that they could be Jihadists coming to kill Americans,” Cruz said. This sounds reasonable enough on the surface.

Of course there are legitimate security concerns, and we can’t let people enter the country from Syria – or anywhere else – without first vetting them. And we absolutely can vet them, despite what Marco Rubio claims. But Cruz, like Bush, isn’t worried about vetting refugees or preventing terrorism. He’s interested in placating nativists, and in pandering to his religious constituency. “We need to be working to provide a safe haven for those Christians who are being persecuted and facing genocide,” he said, “and at the same time shouldn’t be letting terrorists into America.” What about the non-Christians being persecuted and facing genocide - are they unworthy of humanitarian assistance?

The implication here is that the Syrian refugees, precisely because they’re Syrian refugees (read: Muslims), are terrorists, not human beings fleeing a war zone. I’m not sure Cruz really believes this, since he said as recently as last year that we should allow Syrian refugees to enter the United States. And Cruz is a consummate opportunist, so he's likely flopping with the political winds on this issue. In any case, his remarks will surely boost his numbers among Christian fanatics already predisposed to view problems like this in false, totalizing terms.

Whatever his motivations, the conservative base is already primed to fear Muslims, so it’s no surprise Republicans like Bush and Cruz and Jindal are seeking to capitalize on this – it’s the politically expedient thing to do.

But it’s also dangerous and counterproductive.

To begin with, the passport was fake – and that ought to give us pause. What we know is that  all of the suspects so far identified have been either French or Belgian citizens, not Syrians. Essential to ISIS’s narrative is the illusion that the West is at war with all of Islam, with every Muslim in every country in every region. They want a total clash of civilizations, and they’ve said so. Because it serves their interests, we should at least consider the possibility that ISIS wanted this passport to be found. Perhaps this isn’t the case, but we have every reason to confirm this before making reactionary proclamations.

When bigots like Cruz refuse to treat issues like this with the nuance they deserve, they serve the larger aims of ISIS. They give the impression that we aren’t interested in making common cause with the majority of Muslims who share our disdain for groups like ISIS and Boko Haram. They make it harder to win this war, which is a war of ideas as much as it is anything else.

Syrian refugees fleeing this conflict are already an enemy of ISIS, as they’ve declared themselves traitors to the caliphate, as Zack Beauchamp has noted. “ISIS depicts its territory as a paradise,” Beauchamp writes, “and fleeing refugees expose that as a lie. But if refugees do make it out, ISIS wants them to be treated badly – the more the West treats them with suspicion and fear, the more it supports ISIS’s narrative of a West that is hostile to Muslims.”

The worst part about this disgusting opportunism is that it plays perfectly into the hands of ISIS and everyone else interested in cultivating a war between the West and the entire Muslim world. There’s no solution to this problem that doesn’t involve standing in solidarity with the millions of Muslims who do not share ISIS’s religious ideology, and who suffer on account of it.

Fear-mongering stunts like this undercut our efforts to bridge this gap, and if Cruz or Bush or Rubio cared about something other than their poll numbers, they wouldn’t exploit this tragedy for political gain.