With "Cabs, Camels or ISIS," Thomas Friedman officially becomes a parody of himself: Can't a New York Times columnist do better than this?

"Without order nothing good can happen" sounds like The Onion mocking Friedman, not prize-worthy prose 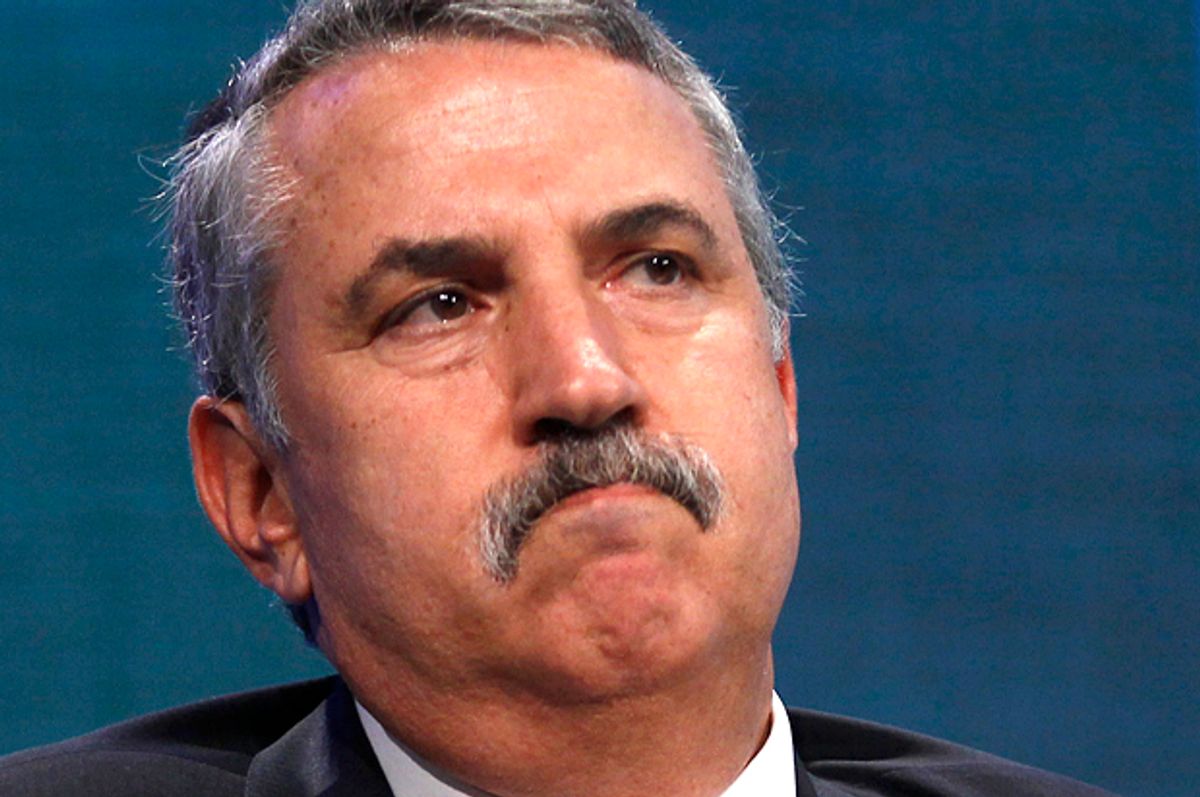 Scientists toiling deep in a basement laboratory in Denmark have been working for months, and have finally found what they’ve been looking for. They have distilled the essence of New York Times columnist Thomas Friedman’s output into one quintessential paragraph:

So, about 1,000 miles south of the Islamic State start-up in Iraq and Syria — where jihadists are using technology to spawn disruption on a massive scale — another group of Muslims (and non-Muslims) in another Arab country are disrupting the world of camels and cabs.

Okay, I’m kidding a little bit. This is not from a Scandinavian lab but from Friedman’s column today, “Cabs, Camels or ISIS.” Friedman is a smart guy whose heart is in the right place; he really, really wants peace and democracy in the Middle East, the region he’s been writing about for many years.

But besides some anecdotal details – “The first calf to come from a cloned camel was born at a research center in Dubai and a local taxi start-up is taking on Uber in the Arab world” – some of the column reads like an Onion parody. If there is an award for consistency, Friedman should win it. If we’re trying to find news ways to think about this complex, changing region that has been back on the front page because of the Paris attacks waged by ISIL last week, this is not it.

So what makes this one so yawn-inducing? First is the lazy, un-ironic use of “disruption,” the cheerleading Silicon Valley term that becomes harder and harder to use with a straight face as various “disrupting” influences tear up life in the developed world, putting people out of work and destroying entire industries. (Including, it’s worth noting, Friedman’s.)

Friedman really, really likes the term. “Often in the middle of something momentous, we can't see its significance,” he wrote in a column seven years ago. “But for me there is no doubt: 2008 will be the marker — the year when 'The Great Disruption' began.” (The column, incidentally, was called “The Great Disruption.”)

Alongside this are two awfully familiar Friedman ideas: That market capitalism can solve our problems -- in the Middle East and, often, everywhere else -- and that middle-class stability (sometimes known as “order”) can keep people in tumultuous places from getting radicalized. Here’s Friedman again:

Given that, I believe U.S. foreign policy out here should progress as follows: Where there is disorder, help create order, because without order nothing good can happen. I will take Sisi over the Muslim Brotherhood. But where there is order, we need to push for it to become more decent and forward-looking... And where there is constitutional order, as in Tunisia, protect it like a rare flower.

Then he endorses Obama’s bombing. “But before we go beyond that, we need to face this fact: To sustainably defeat bad ISIS Sunnis you need good non-ISIS Sunnis to create an island of decency in their place,” he writes. “And right now, alas, finding and strengthening good non-ISIS Sunnis is the second priority of all the neighbors.” That may be a playful riff on the NRA’s “good guy with a gun” line. Either way, it doesn’t really tell us much we didn’t know.

Order, moderation, flowers – what’s not to like? But if people haven’t tried these before, they haven’t been reading Friedman’s columns: He comes down this way a lot. (In the months after the September 11 attacks, he was a zealous supporter of George W. Bush’s invasions.)

The problem with a column like this isn’t that Friedman is wrong, exactly. It’s that he’s not really moving things forward. A lot of people are looking for intelligence and wisdom on the situation in the Middle East right now. With three Pulitzers and some of the best journalistic real estate in the world, he can’t do better than this?