Before binge-watching Jessica Jones, read "Alias," the feminist comic it's based on

The new Marvel show "Jessica Jones" is based on the feminist comic "Alias," and it has a lot to live up to 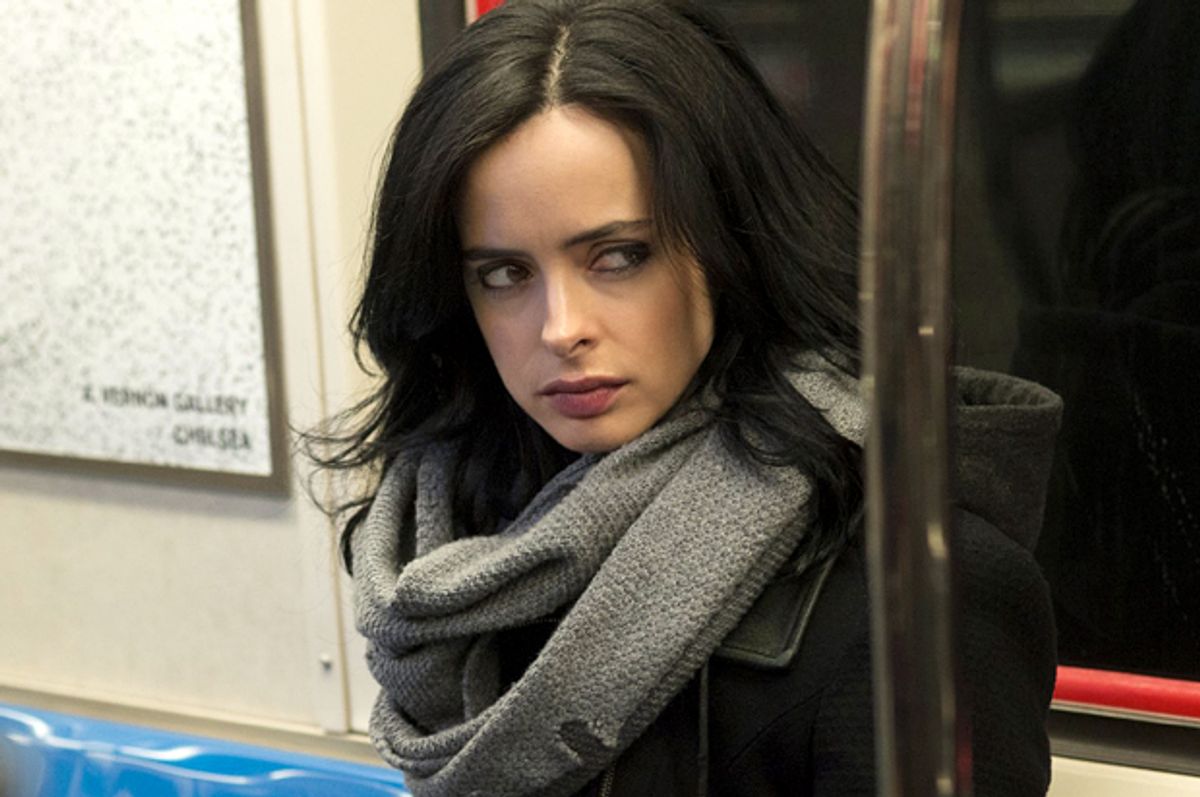 Starting at midnight on Friday morning, Netflix will be releasing its second TV series set in the same Marvel universe occupied by the "Avengers" films, a show titled, simply, "Jessica Jones." There's a lot of anticipation around the show, which follows the acclaimed series "Daredevil," which is also set in Hell's Kitchen in New York City and, like "Jessica Jones," tells a smaller, more localized superhero story.

The show is already getting great reviews, and it's no surprise, as the comic series it's based on, titled "Alias," is one of the most fascinating--though, fair warning, heartbreaking--superhero stories you'll ever read. (Spoiler warning from here on out.)

When we first meet Jessica, she's a hard-drinking, clearly depressed private investigator who technically has superpowers--she is super-strong and can fly, sort of--but they are underwhelming in a world that has Captain America and Thor in it. She's bitter and sarcastic and is so unpleasant to be around that she has almost no friends. But she's also smart and funny and you can sense that she has a good soul underneath all the anger.

(You can see why Krysten Ritter was cast as Jessica.)

For most of the series, the stories were largely about Jessica's work as a private investigator, but we learn in bits and pieces that  she once was a bright, pretty superhero named Jewel worked with the Avengers, before her life fell apart. Eventually, toward the end of the comic run, we find out what happened: She was kidnapped by a super-villain called the Purple Man (to be played by David Tennant), who has the power to force anyone to do whatever he wants simply by telling them to. He holds her with the powers of mind control, and while he never rapes her, he does something nearly as bad. He makes her watch him have sex with other women (whom he is presumably raping) and makes her beg him to love her while he does it.

Oh yeah, did I mention the series came out in the early 2000s, when Marvel was experimenting with adult-only comics?

The story gets worse: While under the Purple Man's control, she picks a fight with the Avengers and they would have killed her if Ms. Marvel, who is her only real friend in the world, hadn't intervened. But what makes the story so deeply memorable is the hellish situation of being controlled for eight months by the Purple Man.

It's weird saying this about a story where some people can turn purple and others can fly, but "Alias" is one of the sharpest stories about domestic violence I've ever read. So many pop culture portrayals of domestic violence, afraid of losing audience sympathy for the victim, leave out the emotional reasons that victims stay: They are in love, their abuser is playing mind games with them, they have bought into the abuser's claim that no one else cares about them, they fear being alone forever if they leave.

What makes the Purple Man such a scary villain isn't the violence he can do to the body, but the way he gets into her head. Even after she escapes him, he haunts her thoughts, and she drinks so much in part to escape her lingering trauma. By making magic a metaphor for the gaslighting and manipulation process that abusers use to control their victims, the writer, Brian Michael Bendis, makes it easier for the reader to understand the pull that all this can have over the victim.

This is a story that could have gone very badly. One of the hoariest clichés in modern storytelling is making every female character's sad story one of sexual violence. Bendis, no doubt aware of this criticism, even calls it out in "Alias": But the story rises about the usual clichés about women and violence. This isn't a case where sexual violence is a cheap ploy to get a rise out of a presumed male audience, and inflicted on a cardboard character who exists only to be a victim. Instead, this is a deeply feminist story, one that seeks to illuminate these issues and humanize the victims of these crimes.

Bendis and his artist, Michael Gaydos, pull this off in a number of interesting ways that other writers could learn from. By the time the reader learns about Jessica's kidnapping, they've already come to know her as a full human being who is a unique mix of admirable traits and flaws. Gaydos is careful to draw Jessica in ways that aren't objectifying--sure, she has a lot of sex and we see her naked, but she seems like a messy person in an ordinary body, not someone who is a piece of meat served on a platter.

The narrative also has deep feminist understanding of the social structures that allow abuse to flourish. He has magical powers, but the Purple Man also knows to exploit the way women are socialized to be pleasing and submissive to men, even if they find those men repulsive. And, of course, the first time Jessica reaches out to the outside world and tries to escape her captor, she is blamed and abused by people she thought were her friends, even though none of this is her fault. We realize that Jessica can't escape for so long because almost no one cares to help her do so, something that a lot of domestic violence victims experience.

The story is infused with feminist themes of sisterhood and survival, lifting it about the routine use of women as two-dimensional victims, often existing only to advance a male character's development. At Jessica's lowest point, when the Avengers are beating a mind-controlled Jessica Jones, Ms. Marvel swoops in, crying, and rescues her friend, a moving metaphor for the power of believing a victim, even when everyone else would rather blame and attack her.

Ultimately, Jessica's story is one of survival. It isn't an easy story--you spend a lot of time cringing at the dumb mistakes she makes--but bit by bit, Jessica pulls herself out of her funk, learns to trust people again and starts living her life instead of hiding away in shame. It's a deeply human story, understanding that surviving is not easy and it is often not pretty, but that someone who makes it to the other side still has much to be proud of.

It's a lot for a TV show to handle, even if it comes out of a comic book. But with a strong cast, powerful source material, and the success of Netflix's first go-round in this territory, "Daredevil," there's every reason to expect great things from "Jessica Jones."