Donald Trump is the insane GOP id. Of course he's surging after Paris -- the worse things get, the better he will do

Paris won't scare Republicans from voting Trump. They do not want serious. They want to vote their ugliest impulses 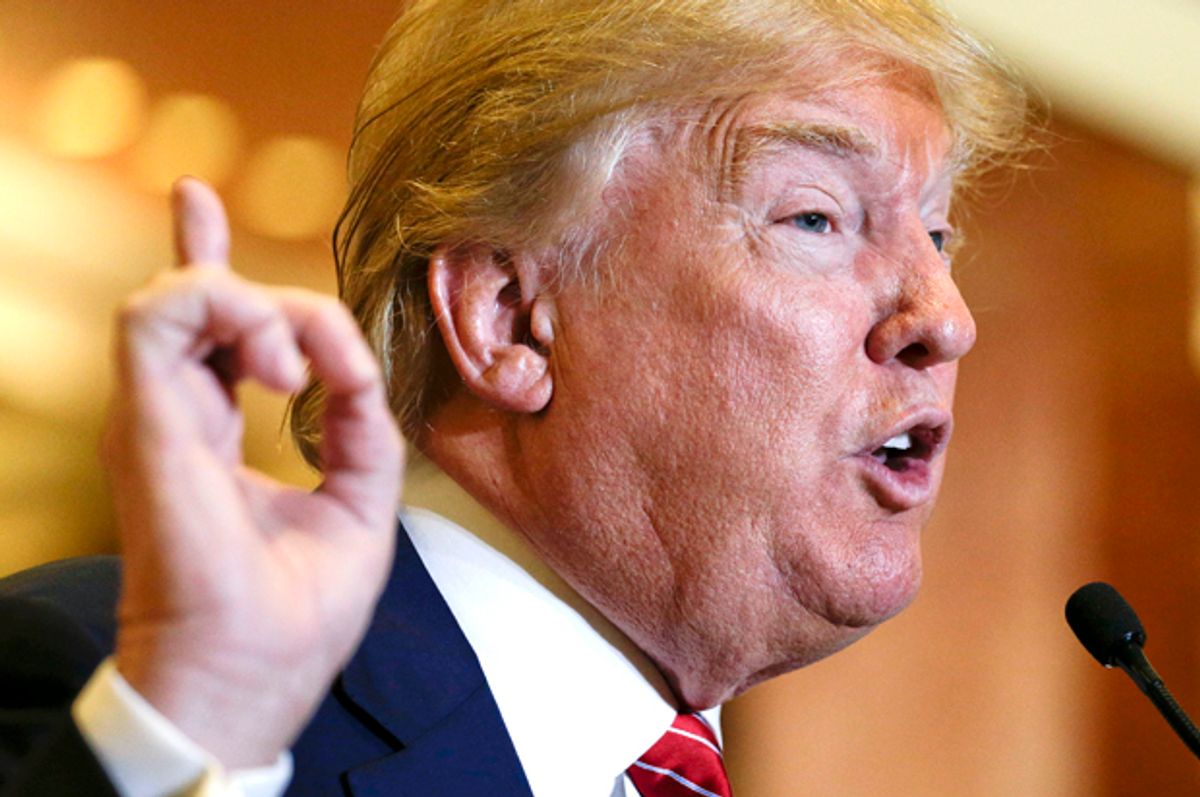 As Steve Benen at MSNBC writes, "there was no shortage of pundits" after the Paris attacks who said that was what would---finally, finally---destroy Donald Trump in the polls. It's a belief that shows no understanding of the right-wing base whose opinions Republican primary polls capture because, and this should have been entirely predictable, Trump is surging in polls while the soft-spoken, though just as nutty, Ben Carson is falling.

The belief that Trump would take a hit in the polls is based on the assumption that there is still a vein of seriousness on the right, one that would be inspired by the gravity of the ISIS situation to turn its back on a clown like Trump and look instead to less exciting candidates that are perceived as being more responsible. But let's face it: If Republicans were actually interested in a mature, considered and effective response to terrorism, they would vote for Democrats. Clearly, being adults about this is not a priority.

Donald Trump may have a big mouth and say things that are really out there, but it's not like the other Republicans are singing a different tune. They're all mindlessly pushing war as a solution and acting like chest-thumping will somehow intimidate ISIS, when in reality, escalation and war are exactly what ISIS wants. While some are more forceful about it than others, they're all pushing the idea that the way to fight ISIS is to trumpet Christianity as a superior religion to Islam, implying that this is a war between faiths, when it is in fact a war of fundamentalist radicals versus everyone else, with other Muslims being the primary targets.

When everyone is singing the same song, is it really a surprise that Republican voters are going to be drawn to the one who sings it the loudest?

There are no doubt a few competing strains of conservatism: The veiny-necked demagogue stripe, the condescending "libertarians," the pious Bible-huggers. But what a lot of pundits fail to miss is that these are often less camps within the Republican coalition and more competing urges within individuals. The conservative who is drawn today to Carson's passive-aggressive "I'll pray for you" act might, tomorrow, feel more in a "kill 'em all and let God sort 'em out" mood down the road, in different circumstances.

The attacks on Paris are quite obviously going to incline your average conservative to whip out the paranoid xenophobe face. Donald Trump is by far the best cipher for that urge, not despite his incoherence and grandiosity, but because of it. He is a living embodiment of how a lot of people on the right feel right now: Angry, racist, eager for some James Bond fantasy about shooting your way out of the problem. But since we're dealing with moods more than constituencies, it's also possible that some other issue will pop up between now and the primaries that will distract Republican voters, and the polls will shift again.

To be clear, while Trump's public statements on ISIS don't make rational sense, he's actually quite clever in crafting messages that are exactly what Republican voters want to hear right now.

For instance, Trump's rhetoric about ISIS pleases the conservative love of tough guy posturing: "I would bomb the shit out of them. I would just bomb those suckers, and that's right, I'd blow up the pipes, I'd blow up the refineries, I'd blow up ever single inch, there would be nothing left."

But notice what he doesn't say: That he would commit ground troops to Syria, something that Jeb Bush--- who is also eager to get voters to believe he's a big, tough guy---says he will do. Trump clearly understands the conservative id a lot better. What the chest-thumping conservative voter wants is to posture about how he's tough without having to deal with real danger. The bombs-not-boots strategy appeals to that sensibility.

Trump is also good at packaging up what are actually policies of cowardice, and spinning them as statements of courage. Trump has entertained the idea of shutting down mosques, creating a database of Muslims, and requiring them to have special IDs. These are not tough guy positions. These are the positions of someone who is a trembling coward, cringing in fear of old men and mothers pushing babies in strollers.

But he has a nifty trick for making his fear sound brave, by pretending he's standing up against some kind of political correctness police. "“We’re going to have to do things that we never did before. And some people are going to be upset about it, but I think that now everybody is feeling that security is going to rule,” Trump told Yahoo! Politics. “And certain things will be done that we never thought would happen in this country in terms of information and learning about the enemy. And so we’re going to have to do certain things that were frankly unthinkable a year ago.”

It's a neat trick, and he performs it deftly: The enemy isn't ISIS in this quote, but the implied "politically correct" liberals that would stand between him and his fear-based program of marginalizing and harassing innocent Muslims. This subtle shift makes him sound tough, instead of what he actually is, which is someone who is so afraid he will harass ordinary people going to worship services.

Of course Republican voters are going to eat that up. Trump tends to their every hang-up and contradiction with loving care, assuring them their cowardice is courage and bigotry is just common sense. Other Republicans can try, but he lies with an ease that is frankly hard to match. So much of conservative politics is about just voting your ugliest impulses. In that environment, the uglier things get, the better Trump will do. You can count on it.