How "Scandal" became great again: By replacing Olivia's white hat with a crown

By focusing on Olivia and Fitz, creator Shonda Rhimes found a way back to the show's political beating heart 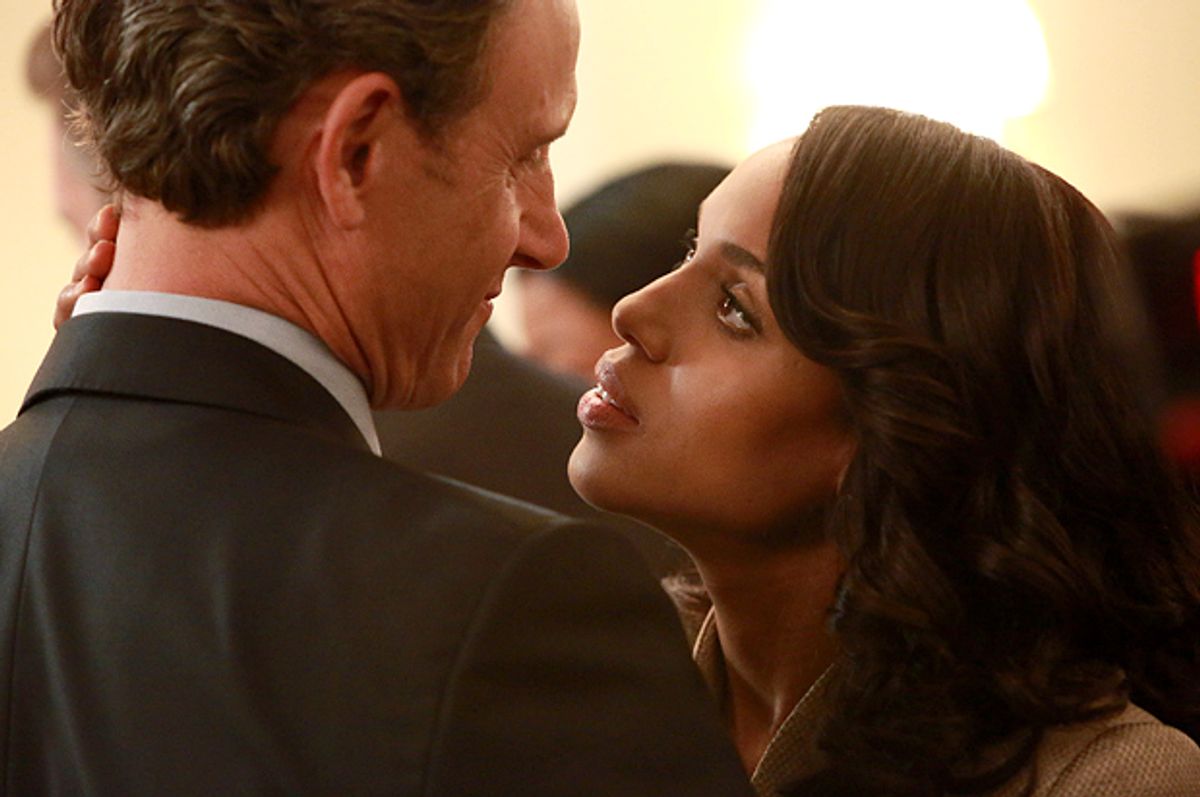 There was a moment, at the beginning of this fifth season of “Scandal,” where it looked like the show was about to do a double-take it’s pulled many times in the past. Olivia Pope (Kerry Washington) is not a character who seeks the limelight, and yet she is entangled in an affair with one of the most recognizable figures on the planet—the president of the United States, Fitzgerald Grant (Tony Goldwyn). Over the past several seasons, Olivia’s both tried to end it with Fitz and tried to keep herself out of the limelight, and every time, it’s failed. “Scandal” casts Olivia and Fitz in a relationship of unstable and all-consuming passion, meaning that throughout even the most implausible obstacles—international warfare, an assassination attempt, and Olivia’s father killing Fitz’s son that one time—their love for each other endures.

In classic star-crossed lovers fashion, it seemed like “Scandal”’s operating plan was to constantly have Fitz and Olivia quiver at the edge of consummation and heartbreak, putting them through various melodramatic obstacles to maximize audience anxiety. This moment was no different. In the second episode of the season, “Yes,” Olivia gets a car headed away from Washington, D.C., to investigate a case that is far removed from the crosshairs of a camera lens. She is running from the president’s declaration that he loves her, that he wants to leave his wife—the First Lady, who is also now the junior Senator from Virginia, in a brazen nod to Hillary Clinton—to marry her, instead. She is also running from the press, because someone in the White House leaked photographs of Fitz and Olivia looking rather romantic. The chickens are attempting to come home to roost, but Olivia is outrunning them, as fast as possible.

It’s deliberately familiar. This series of events is almost exactly what happened at the end of the second season and beginning of the third, when Olivia and Fitz’s relationship almost goes public. Olivia did the exact same thing—running on a plane, that time, instead of a car. The episode—“It’s Handled,” which is Olivia’s now-signature catchphrase—showcased Olivia’s father, Rowan and/or Eli (Joe Morton), with a Shakespearean monologue that was punctuated with what is his now-signature phrase: “You have to be twice as good as them to get half of what they have.” When that scene aired, it was a revelation; a ruthless, unvarnished distillation of race relations. “They” are white people, and in this case, “they,” specifically, are embodied by Olivia’s paramour Fitz. Where Olivia is a diminutive black woman possessed almost completely by her intense emotions—anger, passion, pride—Fitz is a tall white man, always clad in a suit and tie and flag pin. He is, in his flaws and foibles, the embodiment of entitlement—a selfish man who does not even see that he is selfish. Fitz is the patriarchy, and his torrid relationship with Olivia is a stand-in for the alternately violent, exploitative, and genuinely loving oppressors have with their oppressed. No wonder she runs; no wonder, too, that no matter how far she runs, she can’t quite escape him.

So yes, in this season’s “Yes,” Liv runs. But unlike the third season, where she covers up her relationship with the president and distances herself from the Oval Office, she instead returns to the scene of the crime. And when the first reporter of a hundred crowding around her asks if she’s the president’s mistress, she smiles and says, “Yes.” What has followed is the story of Olivia becoming the de facto First Lady. And this first half of the fifth season, which ends tonight with the winter finale, “Baby, It’s Cold Outside,” has been one of the strongest arcs of the show to date.

One of “Scandal”’s storytelling issues throughout the third and fourth season—after the explosive and addictive second season that made the show must-see-TV—was that showrunner Shonda Rhimes tried to raise the stakes by demonstrating repercussions radiate far and wide from the event horizon of the destabilizing relationship between Fitz and Olivia. From that came B6-13, a shadow government that seeks only to consolidate power at any cost, and a brief war in (fictional) West Angola, after Olivia was taken hostage to manipulate Fitz. Both storylines—and B6-13 is ongoing—failed to really take narrative flight; an endless conspiracy and an unseen war are easy to introduce, but very hard to write well.

With season five, Rhimes has contracted the story back to its epicenter—Olivia and Fitz, the relationship that for better or worse is the show’s defining characteristic. You don’t have to like them together to appreciate that they are the story’s narrative powerhouse. Washington and Goldwyn will go down in history as one of the screen’s most compulsively watchable couples; even when you hate them, it’s hard to take your eyes off of them. Now that they are out of the closet, so to speak, it’s even better; Fitz and Olivia manipulate each other all day and then attend state dinners together in the evening. Fitz’s chief of staff Cyrus (Jeff Perry) has found himself increasingly obsolete as Olivia becomes Fitz’s chief and most trusted adviser. In a universe where President Barack Obama never existed, Olivia Pope stands on the seal of the president in the Oval Office, and she tells the president what to do.

It is a power that terrifies and consumes her. One of the lessons of “Scandal,” as Todd VanDerWerff wrote in 2013, is that you don’t wield power, power wields you:

Because of its female African American lead and diverse cast of characters, Scandal is often written about as a breath of progressive fresh air amid a stagnant primetime landscape. And yet the show itself is deeply cynical about these sorts of changes. Women and minorities can assault the white-guy hegemony and attain power, sure, but the system is so deeply entrenched that it will warp anyone who grasps that power. Power is eternal; the people who wield it become masks meant to obscure its darkness. […] there’s no low the show’s fictional administration won’t stoop to in order to achieve its goals.

In last week’s episode, “Rasputin,” Fitz moved Olivia’s possessions into the White House, after fishing her out of FBI custody. Olivia, transfixed, watched as attendants put away her wardrobe. Pointedly, on the top shelf, a white hat lay, unused; below it were three outfits, in black, white, and gray.

As I’ve written before—the struggle of “Scandal” is the struggle for Olivia Pope to not need to be twice as good to go half as far, or, as Fitz routinely demonstrates, to be half as good to go twice as far. Instead it’s for the playing field to be roughly equal; for Olivia to be able to go once as good, to go once as far. She has run away from power for many years because she has seen how much it corrupts. But now, in a post-“Yes,” world, she is wielding it. She has replaced her white hat with a crown. I am looking forward to witnessing what commentary Rhimes has for us on what it means, for both Olivia and the world, when a woman who means well comes into great power.