Olivia Munn slimed by the "Jessica Jinx" effect: We'd rather blame the girlfriend for a football losing streak than the players on the field 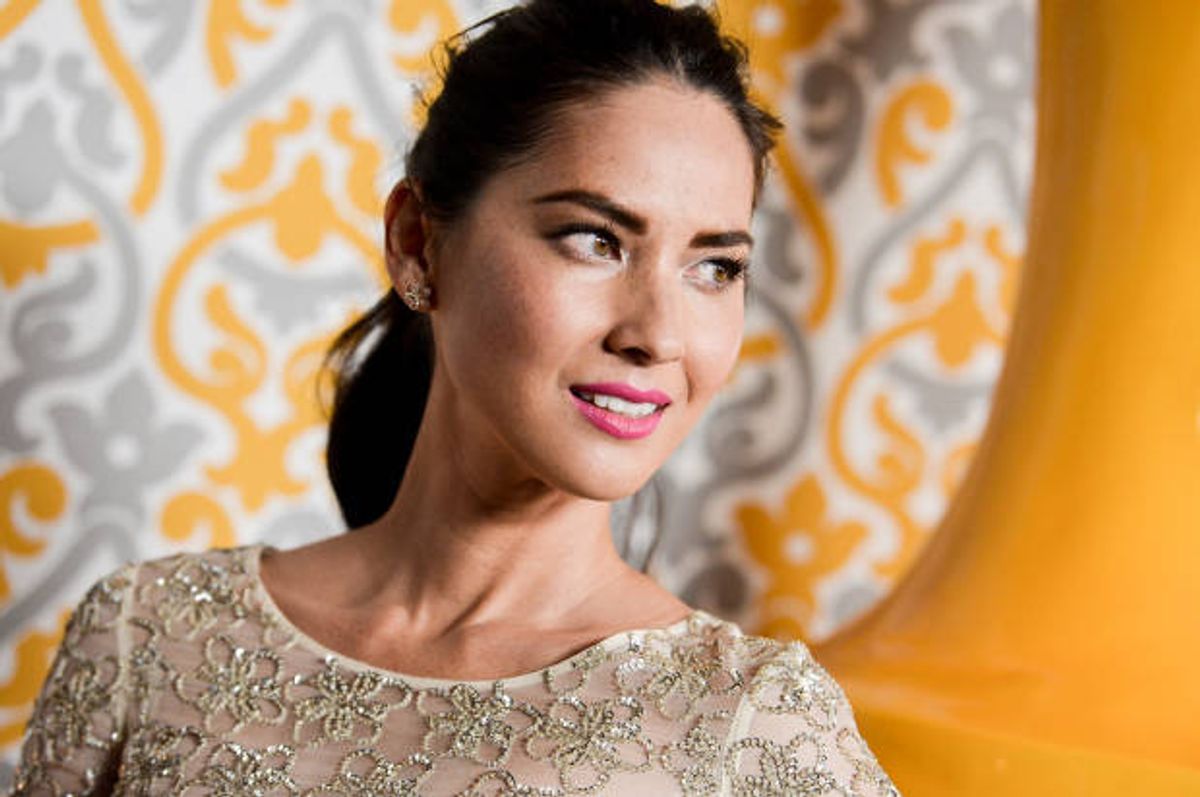 After winning their first six games, the Green Bay Packers are on a three-game losing streak. Your opinion on why that may be likely differs: If you’re a reasonable person, you may consider that it’s a simple casualty of the law of averages. Even the best franchises are likely to get their hearts broken a couple times each season; in 2011, the New York Giants lost six games and still won a goddamn Super Bowl.

But if you’re a sexist Internet troll, your take has less to do with statistics or Aaron Rodgers’ gifts as a quarterback and everything to do with Olivia Munn’s pudenda—which, like her forthcoming "X-Men" character, is working for the forces of evil. Munn released a statement on her Twitter calling out fans who have blamed the actress for Rodgers’ troubles on the field, as well as news outlets like the Washington Post and Fox Sports for fanning the flames of speculation. She also directly pointed a finger at ESPN’s Rob Demovsky for a column in which he suggested that personal problems in the couple’s relationship may have affected his performance.

This isn’t the first time that male fans have lashed out at a quarterback’s girlfriend for putting her vaginal witch’s curse on him. When Jessica Simpson attended a Cowboys game in 2007, her then-boyfriend, Tony Romo, had the worst game of his career, completing just 13 of his 36 passes against the Philadelphia Eagles with no touchdowns. Fans and the media branded it the “Jessica Jinx,” and it’s part of a long, disturbing trend of blaming women for men’s failures, mistakes, or even worse—their death. When Kurt Cobain took his own life on April 5, 1994 after a history with depression and drug abuse, it couldn’t have been his own demons that killed him. It had to be his wife, right?

It’s natural to want to find an explanation when bad things happen and provide a degree of certainty to chaos of life, but too often that need for closure ends up pointing a misdirected finger at women. Perhaps the most famous case of this is the Beatles’ breakup in 1970—when Paul McCartney announced to the public that he would be leaving the band, following John Lennon’s own disclosure to his bandmates months earlier that he would be departing to pursue other projects. Given that Lennon was in a side project with his wife, the Plastic Ono band, fans assumed that Yoko Ono was the reason behind the split.

In a 2009 essay on the band’s dissolution, Rolling Stone’s Mikal Gilmore explained that it had nothing to do with Yoko’s career ambitions and everything to do with Lennon and Paul McCartney’s complicated relationship. “The long friendship of John and Paul, in particular, was undergoing volatile change,” Gilmour explained. “Lennon, the band's founder, had in some ways acquiesced leadership of the band; more important, he was beginning to feel he no longer wanted to be confined by the Beatles, whereas McCartney loved the group profoundly—it was what he lived for.”

A friend close to the band explained explained that the breakup was due to the pair’s “unhealthy rivalry,” but that doesn’t even take into consideration George Harrison and Ringo Starr, who had long been dwarfed in the public eye by their bandmates. In a Quora post, music education professor Ethan Hein sheds light on what it must have felt like to live in John Lennon and Paul McCartney’s shadows:

[I]magine being George Harrison, one of the best rock songwriters in history in his own right, stuck in Lennon and McCartney's shadow. (His first solo album, All Things Must Pass, was an explosive burst of all the material he'd been unable to get onto the last few Beatles albums, and it's a must-hear.) And think of poor Ringo -- when John Lennon was asked if Ringo was the best drummer in the world, Lennon replied that he wasn't even the best drummer in the band. McCartney was and is an excellent drummer, and Ringo found himself dejectedly playing maracas or bongos on several of the later tracks.

McCartney himself has likewise absolved Yoko of blame, but it’s not about facts—it’s about having a villain, particularly a devilish femme fatale who prays on a perfect hero. In an essay for Salon, William Todd Schultz explains that “the roots” for this idea “are in ancient Greece:  Bewitching siren lures dazed sailor to his watery death,” and we've never stopped being obsessed with heartless vixens who drive men to do very bad things. W. Somerset Maugham’s "Of Human Bondage" canonized the good-hearted man (Philip Carey) who loves a cold woman who will never have him; in true classic novel fashion, Maugham punishes her with a case of syphilis and she’s never seen from again.

These themes are likewise ingrained into the history of cinema—especially in film noir, where a marked number of “evil bitches” get what’s coming to them. Notable examples include "The Postman Always Rings Twice," in which Cora (played by a never comelier Lana Turner) seduces Nick (Cecil Kellaway) into an affair as a plot to kill her husband. She, of course, later dies in a car accident for her misdeeds. Her inamorato gets the death penalty, but Nick’s demise is allowed to take place offscreen—cinema’s version of death with dignity. Likewise, 1945’s "Detour" shows its femme fatale (Vera, played by the great Ann Savage) being accidentally strangled to death by a phone cord after blackmailing the film’s antihero, Al.

The tropes of the femme fatale and the “Jessica Jinx” have more in common than you think. If it’s hard for us to face the shortcomings or imperfections of men, these ideas play on our cultural distrust of women. In a Huffington Post article, Damon Young argued that men have a difficult time seeing women as credible. “Generally speaking, we (men) do not believe things when they're told to us by women… other than our mothers or teachers or any other woman who happens to be an established authority figure,” he said. “Do we think women are pathological liars? No. But, does it generally take longer for us to believe something if a woman tells it to us than it would if a man told us the exact same thing? Definitely!”

According to Young, this explains why it took one man to accuse Bill Cosby of rape when dozens of women had been saying the same thing for years, and it also explains why football fans might see an automatic red flag when a woman stands on the sidelines. If we have a built-in skepticism toward women, they become easy targets. After all, the Cosby accusers have been mocked and ridiculed by critics just as much as they’ve been defended, and no matter how many times the myth that Courtney Love killed Kurt Cobain is debunked, she’ll never shake that horrific rumor as long as she lives.

Why is it so much easier to believe that despite all the evidence, Kurt Cobain didn't commit suicide, or that Olivia Munn somehow has single-handedly ruined the Packers' season? Because in a culture that sets women up to be villains, bitches, and liars, people will basically believe anything—except for women themselves.