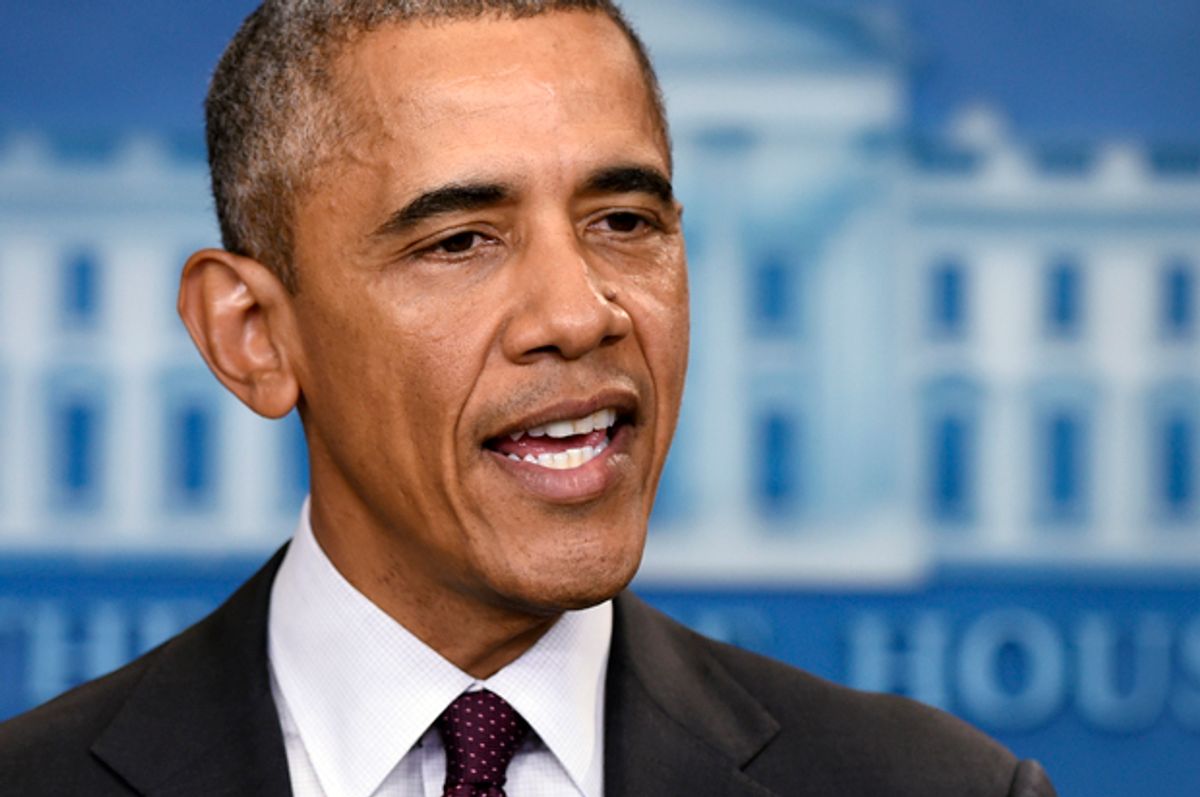 For the third day this week, President Obama finds himself waging a one-man battle against mass hysteria and misinformation in the wake of the Paris attack.

On Monday, the president battled a hostile American media at a G20 press conference in Turkey before delivering this powerful rebuke of his GOP critics who've used the attacks to scapegoat Syrian refugees:

When I hear political leaders suggesting that there would be a religious test for which a person who is fleeing from a war-torn country is admitted, when some of those folks themselves come from families who benefited from protection when they were fleeing political persecution, that’s shameful, that’s not American, that’s not who we are.

By Monday night, 34 American governors had declared their states Syrian refugee free zones, publicly calling for a ban on all refugees from the war torn region. On Tuesday, President Obama was, again, forced to call out such hyperbolic measures during a stop in the Philippines:

I cannot think of a more potent recruitment tool for ISIL than some of the rhetoric that’s been coming out of here during the course of this debate. ISIL seeks to exploit the idea that there is a war between Islam and the West.

When you start seeing individuals in positions of responsibility suggesting that Christians are more worthy of protection than Muslims are in a war-torn land, that feeds the ISIL narrative ... It’s counterproductive, and it needs to stop.

When candidates say, we wouldn’t admit three-year-old orphans — that’s political posturing. When individuals say that we should have a religious test and that only Christians — proven Christians — should be admitted — that’s offensive and contrary to American values.

By Wednesday, at least two GOP lawmakers had called for Syrian refugees to be "segregated" into special "camps" and the Democratic mayor of Roanoke, Virginia, seemingly positively invoked Japanese internment camps during WWII to defend his decision to ban war refugees from his city limits.

Of course, there are legal limitations to such proposals, but many elected officials, clearly unaware or unbothered by the legal constraints, have only increased their calls for extralegal action against Syrian refugees. Republican presidential candidate Rand Paul has even called for ending all U.S. aid to Syrian refugees as millions remain displaced.

So, President Obama's former Ebola Czar (remember that little period of mass hysteria?) recently laid out a path to combat some of the rampant misinformation about Syrian refugees using best practices from his time quelling Ebola fears. Ron Klain suggested that officials not mock concerns, but rather address them with the cold hard facts. On Wednesday night, the president, who belatedly joined Twitter in May, took to the social media network in an attempt to do just that: